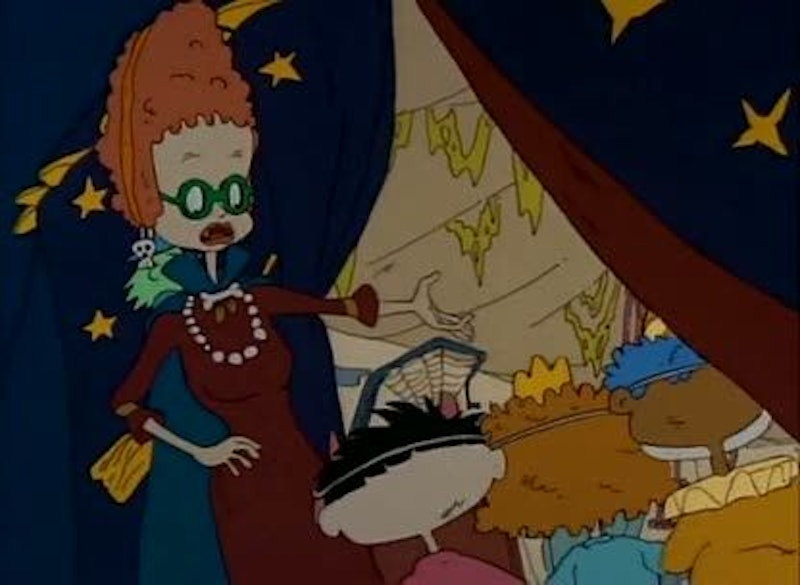 This Halloween is going to be one to remember: thanks to their new website/channel hybrid that will specialize in re-airing '90s Nickeolodeon shows, The Splat, Nickelodeon is bringing back Nick or Treat. Yes, it's OK to squeal. I did — and with good reason. Nick or Treat was a highlight of any '90s Nick kids year. Not only was Nick or Treat a programming block offering up spooky episodes of Nickelodeon favorites like The Secret World Of Alex Mack , Rugrats, and Hey Dude, it was also a call-in show where you could win prizes via choosing the right door by pushing a number on your phone. I mean, I never won anything (or even managed to get on air), but dialing in to try to win was the actual fun part. (A Nintendo would have been nice too, though.)

There was even a variety element to the event with fun sketches featuring guest stars like magician Lance Burton. Even the commercials were unforgettable — a certain talking jack-o'-lantern still haunts my dreams, honestly. The blocks of programming were hosted by the likes of Joey the Werewolf, Pumpky the jack-o'-lantern, and Garrison Keillor favorite, Fred Newman. The '90s truly were a magical decade.

The last time Nick or Treat aired was in 1997 — so 2015 is officially a historical year. Before you start exercising your dialing finger, though, why not look back on some of the most unforgettable specials from Nick or Treat history?

Summers did more than host Double Dare: he also starred in an elaborate special alongside Lance Burton and a group of kids who all find themselves stranded at a haunted theater. There were duels, magic tricks, and enough jump scares to make Paranormal Activity look like an HGTV home tour. While it wasn't exactly a spooktacular event, it was a treat for magic lovers — and that was pretty much everyone in the '90s.

The babies' first encounter with Halloween involved the Pickles turning their home into a haunted house, so it was fairly traumatic to say the least. On the upside, Tommy and friends quest to get a Reptar bar does prove successful making this special Halloween episode a win for everyone.

Alex is dared to venture into a haunted house on Halloween in one of the show's best outings. It's strange to think Alex, who basically has superpowers, would be scared of a creepy house — but the special episode was an excellent reminder that Alex was still just a kid herself.

Whether you realize it or not, your first exposure to H.G. Wells "War of the Worlds" likely came from Hey Arnold! when the show did an homage to Orson Welles' infamous Halloween radio broadcast of the story. Arnold and Gerald's Halloween prank ends up with the entire block believing there is an alien invasion. Hilarity ensues.

This particularly creepy episode of Are You Afraid of the Dark? aired on the final night of Nick or Treat — and while it wasn't Halloween themed, it didn't need to be when it featured a kid almost getting sucked into a portal in his basement by a skeleton.

The very first episode of Aaahh! Real Monsters was not only a Halloween episode, it debuted during Nick or Treat. The clever episode found the monsters venturing out on Halloween to mingle with the humans, and it was a great way to kick off the series.

These two spooky tales complemented each other perfectly, but "Sugar Frosted Frights" gets the edge for focusing on Filbert.

8. The Nick Or Treat Game

Played every year, the Nick or Treat game was the highlight of the evening. After all, you could watch your favorite shows anytime, but how often did you have the chance to play an interactive game with the possibility of winning a CD-ROM? Only on Halloween friends.

I only hope Nickelodeon can recapture the spooky magic of Nick or Treat this Halloween season (and maybe give away better prizes).