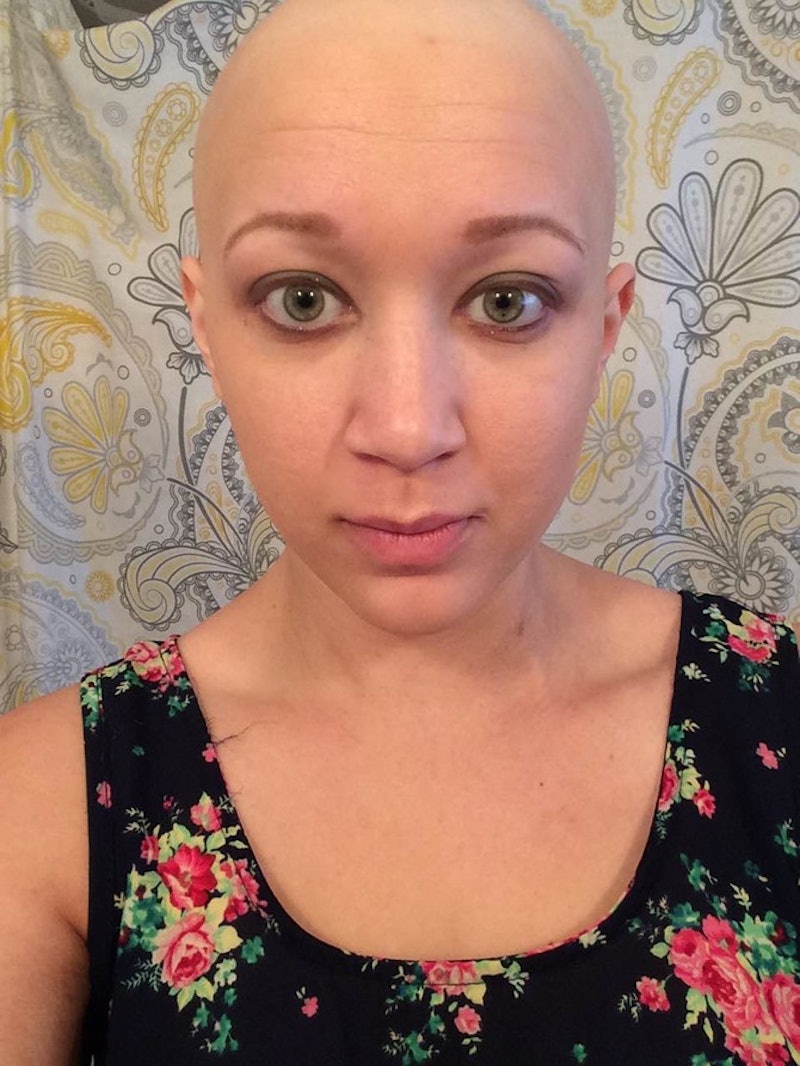 As I lay on the exam table, my main goal was to focus on my doctor instead of the throbbing rib pain that my pancreatic tumor was causing. It was one of seven tumors — four of which were in my organs. I’d just been diagnosed with stage 4 non-Hodgkins Lymphoma, and my tumors were large and painful. The one in my mediastinum was over 23 inches in diameter and had collapsed one of my lungs. But I wasn’t at the doctor about my cancer diagnoses that day. I was there about my fertility.

At 21, I was now faced with the fact that I would probably never experience a pregnancy. One week prior to this, I had been a busy, working, young college graduate. Today, I was a woman whose dreams were getting further out of reach by the minute. My oncologist had sent me to a fertility doctor to see if we could freeze my eggs for future use. The doctor completed an unpleasant vaginal ultrasound, determined that my eggs were safe to harvest, and told me I had to decide what I was going to do with my eggs within the few days that remained before I started chemo.

I was informed that harvesting my eggs would mean they’d stay frozen for up to 10 years, and that I could later use them for IVF treatments, if and when I decided to have children. I went home, laid in bed, and started thinking about what my 30-year-old self would want. I was making this decision for both of us, after all. But I had no idea what to do for her.

Later that night, I sat across from my mom at our kitchen counter, just like I always did when I needed help making a decision.

“No matter the circumstance, I don’t think I’d be equipped to make this decision at my age,” I told her over tea. “I have to make this decision based on something I know nothing about. If the situation was an unplanned pregnancy instead, I think I’d feel this way too. I can’t possibly know what I’d want or what kids mean in my future.”

“I think this is a huge decision to put on you right now,” my mom agreed, sipping her decaf coffee. “It’s sad that even if you don’t make a decision, you’re still making one.”

If I chose not to freeze my eggs, I might give up the opportunity to have biological children. But the more I thought about it, I just couldn’t picture myself doing IVF years in the future. I imagined the treatment would remind me of having cancer when I was a young woman and bring back the pain of putting my life on hold. And what if it didn’t work? I didn’t want to put all my faith in something that, if it failed, would kill my dream a second time.

I went back to bed and pressed around on my lower abdomen, feeling for the tumors that had found their way into my uterus and both my ovaries. I found it ironic that these organs, which were meant to give life, were threatening to take mine away.

Before my cancer diagnoses, I was unsure about whether or not I wanted kids. But it never occurred to me that I might lose the option altogether.

Having children was never something I’d considered before. My focus was on being tough and independent and career-minded. For me, strength and wisdom were the most important aspects of my femininity. At the same time, I had always been proud that I had the ability to create life. I respected the power and strength of motherhood, even if I wasn't sure it was the right path for me. I rested my hand on my stomach, realizing that I’d probably never feel a baby's kick or get to listen to her heart beat as she grew inside of me.

I knew that my ability to bear children didn’t define me as a woman, but I couldn’t help feeling as though some of my power was being taken away from me. A huge chunk of my womanhood was about to disappear, and I had no idea what could replace it. Before my cancer diagnoses, I was unsure about whether or not I wanted kids. But it never occurred to me that I might lose the option altogether. I’d never heard of women being infertile at my age; I was grateful that I had a great prognosis, but I grieved that this cancer would take away my ability to have children.

A few days later, I returned to my oncologist for my last appointment before starting chemo. My mom rubbed my back and my dad took out his notepad.

“Have you made a decision about harvesting your eggs?” my doctor asked after going over my vitals and treatment plan.

“I’ve decided not to do it,” I answered. I saw my dad nod out of the corner of my eye. The doctor looked surprised, but quickly returned back to discussing my treatment. “Just call me Infertile Myrtle,” I whispered under my breath. My mom smirked, but said nothing.

Over 1.5 million women in the U.S. alone are infertile, and 6.7 million have impaired fertility. Some women are infertile because of cancer, for others it's due to trauma or endometriosis. Some infertile women are young and some are older and some women don't yet know about their infertility. But one thing all infertile women have in common is the struggle of living in a world that still pressures women to be mothers. Unfortunately, society continues to perpetuate the concept that, for women, fulfillment comes not from our own lives, but from the lives we create.

I would love to give life. But I can’t. My idea of womanhood is always changing, but the one thing that never changes is the fact that I'm the one who gets to define it.