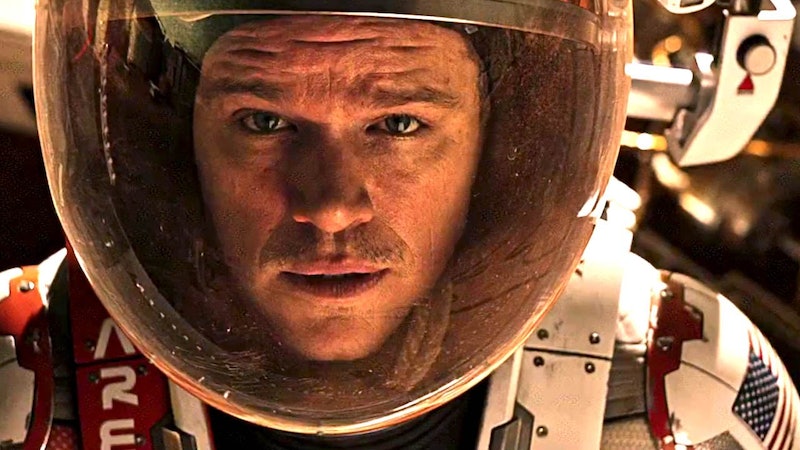 In The Martian, Matt Damon finds himself once again stranded on a planet alone. But unlike his character in Interstellar, who resorts to cryogenic sleep to stay alive, Damon in The Martian is forced to be inventive and resourceful in order to survive the years he's going to be on Mars before anyone from Earth can get to him for rescue. One way he does this is by growing his own food, potatoes, on which he is forced to sustain for his indefinite future. Eating so little would obviously take a toll on anyone, and by the end of his stay on the planet Damon has lost a shocking amount of weight. But did he undergo the transformation for real? How much weight did Matt Damon lose for The Martian ?

According to an interview with Damon, it sounds as if the actor wanted to shed the pounds, but director Ridley Scott forbade it. "I talked to Ridley about [losing weight for The Martian] because I’ve lost weight before for movies," Damon told Newsweek. "We had about six months. And I said, 'That’s perfect. I’ll lose about 30 or 40 pounds, and we’ve got to shoot all that stuff first.' And he went, 'F*ck that.'"

Judging by Scott's reaction, I'm guessing Damon kept his weight intact throughout the movie, so how did he appear so skinny? A likely explanation is that the movie used CGI to alter Damon's appearance. The technique is being used more and more often these days to alter actors' bodies, and was famously put to use in Game of Thrones' Season 5 finale for Cersei Lannister's non-nude nude scene. But the effect has been used numerous other times as well, and here are some examples.

Peeta looks pretty worse for wear in the movie after The Capitol has their way with him, with Josh Hutcherson's bones seemingly protruding from his body. But the actor admitted that he didn't lose any weight for the role, and his emaciated look was 100 percent digitally-achieved. In other words, no actual hunger games took place.

Clearly, the first part of YA series finales like using CGI to make their characters grotesquely thin. Kristen Stewart was made to look sickly thin during Bella's near-death pregnancy using a combination of practical effects and CGI, and remarkably looked much healthier as a vampire.

Chris Evans bulked up to portray Marvel's super soldier, so his muscles were 100 percent real. But before he transformed, Steve Rogers was a 98-pound-weakling, and this look was achieved by some particularly impressive special effects.

The Curious Case Of Benjamin Button

Being born an old man and dying a baby meant that Brad Pitt had to undergo a lot of physical changes for this film. While some were achieved using makeup, the most impressive is the CGI Pitt masquerading as childhood Benjamin Button, in which Pitt's head was digitally captured, altered, and placed on another actors body.

Nicholas Cage didn't exactly get into superhero shape to portray the flame-headed Marvel hero, so he got a little help from the digital effects department. Specifically, he had CGI abs. Where can I sign up for a set?

Believe it or not, Gary Sinise didn't actually lose his legs to portray Lt. Dan, as I believed as a child. Instead, this pioneering 1994 film digitally removed his legs in post-production. He can still walk!

Breast enlargement surgeries could soon be a thing of the past, as both Leslie Mann and Olivia Wilde incorporated the use of CGI breasts in this comedy. Mann appeared nude without really being nude thanks to larger digital breasts being added in post-production, while Wilde sported pasties in her topless scene that were later replaced with CGI nipples.

With all of the flak sometimes directed at the use of CGI, the effect clearly has its uses. Whether its preventing actors from utilizing dangerous weight loss tactics like Matt Damon wanted to do for The Martian, or keeping them from having to film uncomfortable nude scenes, it seems like CGI is definitely making actors jobs a little easier.