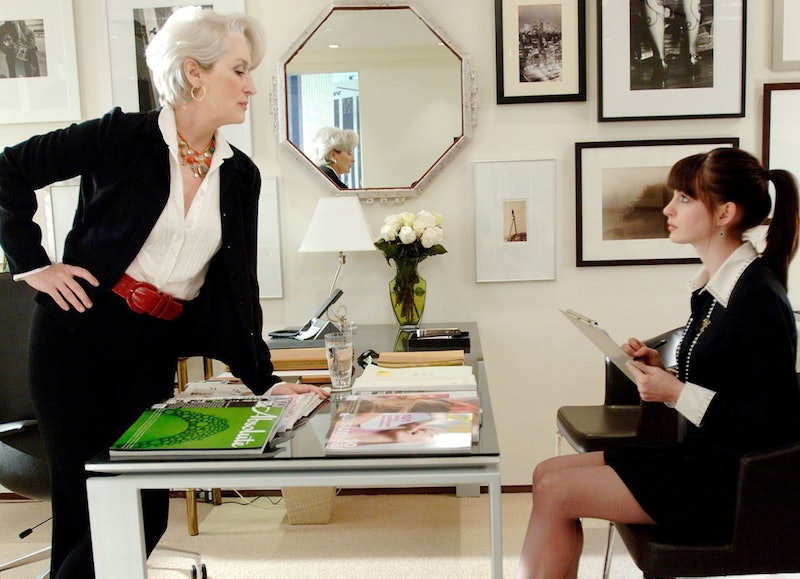 We've all had trouble at work — dull assignments, irritable bosses, gossipy coworkers, a vending machine that only ever has "prawn-flavored" potato chips in it — but sometimes, all the small factors that make a day at the office a drag can come together, creating something far worse: a toxic workplace. A toxic workplace is a work situation that feels psychologically unbearable — not because of the actual work that you do, but because the emotional dynamics of the place are so deeply dysfunctional. In a toxic workplace, workers might be bullied by toxic bosses or coworkers, policies might be totally unclear, hard work might go unrecognized, and you might leave every single day with a tension headache and a burning desire to update your LinkedIn profile.

Toxic workplaces can't always be fixed; while sometimes new management can turn things around, workers typically don't have the power to initiate that kind of change. So, if you discover yourself in a toxic workplace, your only option may be to try to help yourself get through each day until you can find a new job.

But the first step to freeing yourself from a bad work situation is understanding that you're in one — not always an easy task. So use the five points below as a guide to help figure out if your workplace is toxic. And if it sounds like your own office... well, now might be a great time to freshen up your resume. You can put "tolerance for prawn-flavored chips" under "Special Skills," right?

Bosses don't always create a toxic workplace by themselves — but if you see a toxic workplace, a bad boss with poor boundaries, weak communication skills, or inappropriate ways of expressing anger and disappointment is usually nearby.

And the high cost of working under a mean, power-tripping boss doesn't end when you clock out at the end of the day: A 2012 study that found that women who experienced extreme work stress had a 38 percent higher chance of developing cardiovascular disease.

What It Might Look Like: Christine Porath, an associate professor at Georgetown University who studies the physical and psychological impact of negative behavior at work, told The New York Times that a bullying, demeaning boss will often engage in behaviors like "walking away from a conversation because they lose interest ... openly mocking people by pointing out their flaws or personality quirks in front of others; reminding their subordinates of their 'role' in the organization and 'title'; taking credit for wins, but pointing the finger at others when problems arise."

How You Can Help Yourself: Tuning out your boss is pretty difficult since, you know, listening to them is basically your job. But you can set emotional boundaries — like reminding yourself that the things your boss says to you are not a reflection of you or your work, but rather a reflection of their own ego and self-esteem issues. As Porath noted in a piece for The Harvard Business Review, "Incivility ... is often prompted by thoughtlessness rather than actual malice." So remember, it's not that your boss is being mean because they personally loathe you, or that you have some internal defect so horrible that you deserve to be treated this way. Your boss is just a jerk.

Also, you might want to watch Office Space a few hundred times. It really takes the edge off.

2. No One Communicates Clearly

Communication skills are what allow us to diffuse a fight with our partners or friends, have enjoyable sex, and make sure that we don't accidentally get on a plane to Melbourne when we were actually just trying to get to Baltimore. They're also what allow us to get anything done at work. Solid workplace communication — particularly from our bosses — helps us understand what is expected of us, if we're hitting those expectations, and if there is cake left over in the fridge from Maureen's birthday party last week. So when the lines of communication are tangled or nonexistent, it's a pretty clear sign of a toxic workplace.

What It Might Look Like: As Dr. Paul White, a psychologist who specializes in helping people move on from toxic workplaces, wrote on Fast Company, workplace communication problems can include "lack of communication ... indirect communication, withholding information [and] giving misleading information." If your workday is full of your bosses blowing off your questions or coworkers swearing that you "accidentally" got left off a group email for the ninth consecutive time, then you may be looking at a toxic workplace.

How You Can Help Yourself: You can't force anyone to be direct with you, unfortunately. All you may be able to do is commit to engaging in clear communication yourself and hold on to all pieces of written communication. As Alan Henry of Lifehacker suggests, "Embrace tools like Evernote to keep all of your various documents and projects organized neatly, and treat your inbox like a filing cabinet—there should be folders and labels for everything you work on, or even for every person you interact with. That way anytime anyone tries to go back on their word, you can drag out an email or document where they said otherwise."

3. No One Wants To Take Responsibility

In an ideal world, none of us would ever have to take responsibility for something going wrong at work (or anywhere else). In this same ideal world, we'd all have the power of flight and movie theater popcorn would be the nutritional equivalent of a pound of kale. Unfortunately, in our world, taking responsibility is one of the building blocks of maturity and an ethical life, so passing the buck is generally a pretty weak and unsatisfying way to live — and it's a terrible way to run a workplace.

What It Might Look Like: Problems are always blamed on someone outside ("That vendor is always screwing up!") or inside the company ("That Steve on the third floor is always screwing up!"). More attention is given to placing blame than actually fixing problems. Even if you don't see the blaming in action, you might be able to tell that it's going on because no work ever seems to get done. As career expert Stacia Pearce told Daily Worth, "When there is no accountability, order is lost and productivity is stifled."

How You Can Help Yourself: Again, drawing emotional boundaries is a great technique. Find ways to remind yourself that blame that seems to randomly come your way isn't about your actual performance, but about your unhealthy workplace.

You can do whatever works for you — develop a positive mantra you repeat to yourself, hang up quotes that help you stay centered, or have a non-work friend agree to "reality check" you every so often and remind you that you're a competent person stuck in a bad job, not the eternally-screwing-up idiot that some of your coworkers seem to believe you to be.

4. Your Work Is Undervalued

Do the promotions at your workplace seem to have no real connection to who's actually getting things done? Is your work belittled by your bosses? Have you taken on the workloads of several other workers, but your hard work hasn't been acknowledged — in fact, you only get feedback when you're doing something wrong? Undervaluing your employees' work is kind of the perfect storm of the toxic workplace — it joins together narcissistic bosses and poor communication into a single, soul-crushing super problem. If you feel like you're busting your hump and no one seems to notice nor care, call poison control, because your office is toxic and should not be handled by children under the age of 12.

What It Might Look Like: Undervaluing employees' work can manifest in a million different ways — from bosses not acknowledging the fact that you regularly burn the midnight oil to get complex projects in on time, to bosses actively taking credit for your work. You might also notice that your ideas are not being fairly considered by your managers, and your advancement at work does not seem commensurate with the amount of work that you're putting in.

How You Can Help Yourself: If your boss is ignoring your hard work, you will probably just want to rely on your support system to remind you that you're doing good work while you look for a new job. As Amy Rees Anderson wrote of handling the emotional impact of toxic workplaces on Forbes.com, "Find ways to remind yourself of who you truly are. ... Another important coping step is to realize that you cannot control what other people say and do, you can only control your own actions and reactions."

5. Your Coworkers Are Insanely Cliquey

Having work friends is one of the things that makes getting through the work day possible (or, at the very least, more pleasurable). And it's likely that not everyone you work with will all love each other — so don't freak out if your office has a few distinct circles of friends. Don't even freak out if your office has some really obvious groups of tight-knit friends — you might be able to get to know them one-on-one, and eventually find their group less intimidating.

But if your open plan office feels like the cafeteria from Mean Girls — complete with cliques who don't care to be civil with one another, even when they're working on projects together — you've got something more insidious going on than just friendship. You've got some work cliques that are ready to make going to work feel like the only thing worse than going to work: going to high school.

What It Might Look Like: Certain groups of people interact only with each other — and seem actively hostile to others. This can take the form of frequent "closed door" meetings between clique members, rumor-spreading and gossip mongering, and a lack of interest in working on projects with anyone but other members of their clique.

How You Can Help Yourself: Getting access to an exclusive work clique can provide similar thrills to getting access to an exclusive high school clique. But even though gossiping might feel like a relief from the depressing tedium of working in a toxic office, getting involved with a clique that spreads rumors, acts disrespectfully to others, or just exhibits overall bad behavior will end up biting you in the ass in the end. You may alienate other coworkers, find that the clique eventually decides to turn its back on you, or just realize that it is kind of emotionally unfulfilling to act like a high schooler when you're old enough to rent a car.

The best thing you can do for yourself in a cliquey office is maintain as courteous and professional a relationship as possible with the clique, but pass on their offers to go get a tray of jalapeno poppers and talk trash after work — instead, use that time to set up networking meetings, brush up your resume, and do anything else you can to get the hell outta Dodge.