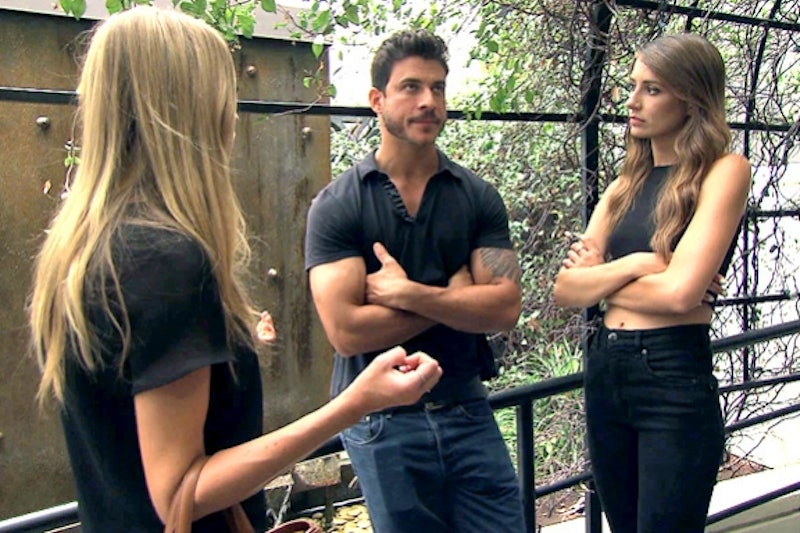 During last week's episode of Vanderpump Rules , Katie dropped the rumor bomb that Kristen and Jax hooked up. Katie immediately backpedaled and said it was nothing more than a rumor. But I've been on edge ever since. I. Need. To. Know. The. Answer. This week, Stassi will sleuth and scheme until she finds out the truth about her ex-boyfriend and BFF. Atta gal. Don't rest until that case is closed, Stassi. I like Stassi a lot. As abrasive as she can be, she's really, really grown on me. The moment she dumped Jax's supplements down the drain and told him he should've spent that money on a gift for her was when I knew I'd root for her always.

I can't help but hope that the rumor about Jax and Kristen is a real thing, but it's not because I want to see Stassi get hurt. I don't want her to get hurt. However, I do want Stassi and Jax to end things for forever. If this rumor were true, it might be the final straw. Ah nah. You're right. Stassi and Jax will never actually end things for forever. Their romance is the purest of romances. Regardless, I guess I still want the rumor to hold water, if only because it could make for some brilliant television. Yep. I'm an asshole. Here are a few things that could happen because of a Jax/Kristen thing:

It could inspire Jax to "prove himself" to Stassi (yet again)/ get another "STASSI" signature tattoo. Because it worked like gangbusters the first time. He should try it again. And again. And again. My dream is that Jax will one day be covered in "STASSI" tattoos.

It Would Open The BFF Door for Stassi & Scheana

If this rumor was true, I don't think Stassi would forgive Kristen. Because Stassi has no problem holding grudges. I bet she'd stop hanging out with Kristen (and Katie. Because Katie kept the rumor secret for so long), and finally go back to being good pals with Scheana. I don't know why I root so hard for Scheana and Stassi's friendship, but I do. I just do.

Oh, I LIVE for Stassi/Jax arguments. Stassi is ruthless when it comes to bringing up the past during a fight. Does it have anything to do with what they're fighting about? Doesn't matter. Anything is fair game in Stassi's world. And this would be one more thing she could throw in his face.

Stassi loves to get medieval and demented. Oh, she doesn't actually torture people. It's all talk. And I LOVE IT when she talks about daggers. This rumor might inspire a dagger-themed rant.