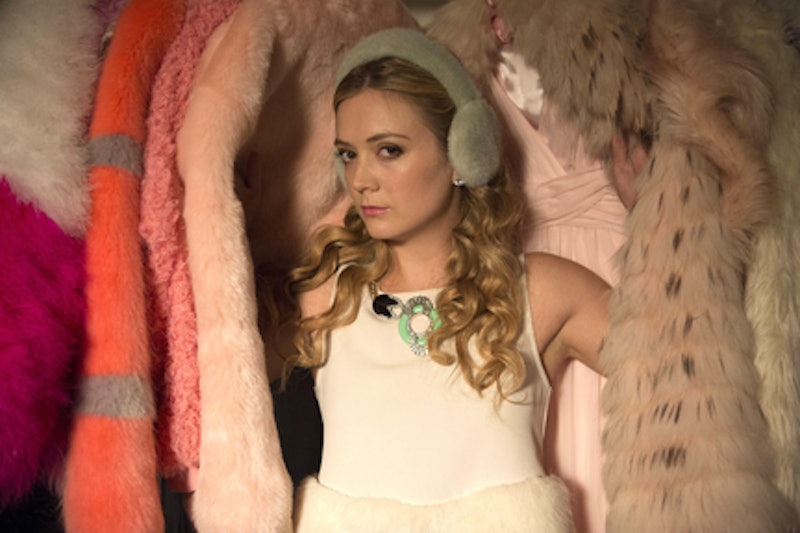 The series premiere of FOX's new series Scream Queens was chock full of mysteries. Who is the Red Devil? What happened to the baby in the bathtub? Why does Chanel No. 3 always wear earmuffs? OK — maybe the last question wasn't weighing as heavy on your mind as the other two, but surely, you must have wondered what Chanel No. 3's deal was. After all, it's not like her school's campus is in Alaska. Sure, the cutesy answer making the rounds on the Internet is that the earmuffs are an homage to the actress who plays Chanel No. 3, Billie Lourd, and her famous mom Carrie Fisher (aka, Star Wars' Princess Leia) — but is there way more to the story?

There might be. In an interview with Scream Queens creator Ryan Murphy, The Hollywood Reporter asked Murphy what was up with the earmuffs and his answer was as coy as ever. "There is a very specific reason why she wears them, and you find out in either episode six or seven," Murphy told THR. "We find out why she wears the earmuffs, but it’s not just fashion. It’s necessity." This revelation is just further proof that there is always a method to the madness of Murphy's shows.

What would necessitate the need for wearing earmuffs every day though? Until the answer is revealed, all I can do is theorize. I have a feeling whatever the reason is, it might just hold even more Scream Queens ' secrets.

The most obvious answer is Chanel No. 3 is hiding her ears because they don't look like everyone else's. Given how strict Kappa Kappa Tau is on conformity, it would make sense for Chanel No. 3 to feel the need to hide anything she perceives as an imperfection from her sisters (though, it should be noted, no physical deformity should ever be considered an imperfection in anyone). What better way than via an unconventional fashion choice? The only flaw with this theory is that, in the opening scene of Episode 1, Chanel No. 3's ears were mostly uncovered — only the backs were left hidden by her hair.

Her Ears Give Away Her True Identity

I know it is a stretch, but what if Chanel No. 3 is actually the baby from the bathtub all grown up, and there is a birthmark on one of her ears that could give her identity away? So little is known about Chanel's minions at this point, one of them could have easily infiltrated the group in order to wreak havoc on the house. If Chanel No. 3's mother was left to die back in 1995, she might be willing to do anything to conceal her true identity long enough to bring the sorority down.

She Is An Ear Model

Maybe Chanel No. 3 is an ear model and wearing earmuffs is a type of insurance, like with hand models who wear gloves to protect their moneymakers. If this is the case, then she should keep those earmuffs firmly in place when the Red Devil is around.

Chanel Makes Her Wear The Earmuffs

Chanel and Chanel No. 3 bear a striking resemblance to each other. Given that Chanel is such a queen bee she renamed her "minions," it would align with her personality if she forced Chanel No. 3 into taking on a quirky fashion choice so no on would ever get them confused. I know if I was Chanel No. 3, I would be bitter over Chanel stripping away my identity.

She Has Extremely Sensitive Hearing

Murphy's characters always have quirks, so I wouldn't be surprised if Chanel No. 3's is sensitive hearing. Wearing the earmuffs could make sound less bothersome — but it could also put her in a position to hear lots of secrets to use as future ammunition against Chanel if need be.

She Had A Traumatic Skiing Incident

Hey, if the lawyer sister is stuck in the '90s, Chanel No. 3 could still be feeling the trauma of a ski trip gone wrong. Her earmuffs could connect to any dark moment in her past really, and act as a security blanket of sorts.

I'm sure Murphy has something even crazier up his sleeve than these theories — and I for one cannot wait until the reveal. Chanel No. 3's love of earmuffs is at least number three on my top unsolved Scream Queens mystery board right now.