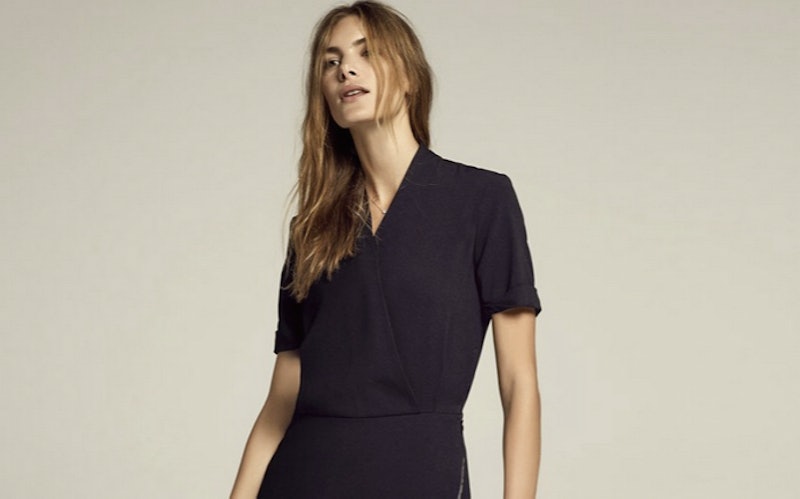 Everything seems to be breaking the Internet lately — be it lack of agreement on what blue and gold look like or Kim Kardashian's booty on a pedestal. Now, it's a little black dress with a 1,000-person wait list. Sold by MM.LaFleur and retailing at $235, "The Tory 2.0" promises to be an "all-season, wear-everyday" type of LBD. While that sounds pretty ideal and would probably save us from a lot of "I have nothing to wear" moments during some uninspired mornings, it's not exactly the first LBD on the market to promise to do so.

So what's making people wait until January just to get their hands on it? Well, it's wrinkle-resistant for one. Plus, it's made from breathable crêpe with a satin lining that will probably keep you cool during the hottest of days. It's machine washable as well, so even though it has a steep price point, you don't need a steep dry cleaning bill. On top of that, it's a faux wrap piece, meaning it's secured and won't accidentally open up on you while you're out on a date or riding the train. So that's pretty nice. However, while it does seem like a pretty solid staple to have in your closet, what exactly made the LBD break the Internet?

Tory Hoen, Editor-in-Chief at MM.LaFleu, told Refinery29, "Word of mouth was what put MM.LaFleur on the map back in 2013, and it continues to be the biggest driver of business for us." With big name bloggers featuring the dress and publications highlighting its popularity, publicity is arguably what's making this little number snowball. It's like the new It Bag. You have to have it... until you have it.

While the Tory 2.0 is a great closet staple and not many women would dispute the pros of having a LBD handy, this isn't the first dress to sell out in record speeds. Below are five other dresses that had folks scrambling.

To many of us, this Design Lab dress might feel like your standard boho frock. What about it made it sell out faster than a Target and 3.1 Phillip Lim bag? The answer: 50 bloggers wearing the Lord & Taylor dress and posting it at the same time.

Coming in over at a whopping $800, you'd think there'd be a moment in which a woman would take a second to consider whether this blue number was really worth it. But nope, the "Phylis" sold out in seconds after we saw Kate Middleton fulfill all our princess fantasies while wearing it.

After Alexa Chung stepped out in Topshop's Unique Collection floral dress, the store was sold out of the hippie little number within three hours. Oh the power of Alexa. Fear it. Respect it.

Pretty much the whole Lilly Pulitzer Target line sold out in minutes after its launch. I mean, really, who wouldn't want happy designer popsicle colors in their closet?

Can you imagine dropping nearly $1500 for a plaid dress? Well, if Kylie Jenner steps out in it, apparently the masses will buy it until it's sold out in a matter of days. Although it was a Houghton dress meant for Kendall, Kylie pulled a little sister move and stole it from her closet. Her legion of fans went nuts and soon after rushed to the store to copy her.

Oh, the magic of a beautiful dress and a cool person wearing it.