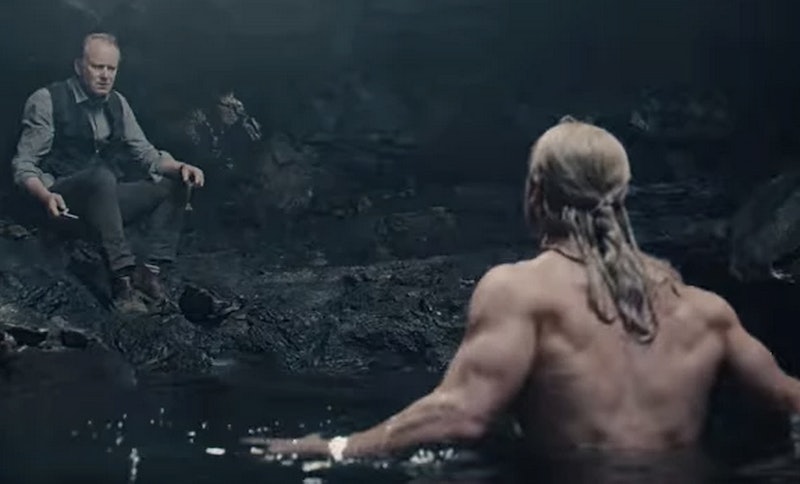 Whatever you're doing, stop, because there's something more important afoot: Chris Hemsworth shirtless in a deleted Avengers scene. I know. If you're getting surgery done on you right now, I apologize, but your doctor will have to step away for just a short moment to take in this masterpiece. We're talking about one of the Hemsworths, sans top. I'm sure I don't have to tell you how crucial this moment is. The scene in question came from The Avengers: Age of Ultron , and starts out with Chris Hemsworth as Thor, and Stellan Skarsgård as someone not Thor who has his shirt on (sorry, as Dr. Erik Selvig), and they're trying to figure out how to defeat Ultron. Thor and Selvig are discussing the Infinity Stones, and then it is to my understanding that Thor has some kind of vision.

I say "it is to my understanding," because the moment Chris Hemsworth popped that shirt off, I went into a muscle blackout, and his upper half demanded all my attention. I'm not sure what words were coming out of his mouth, because I was too distracted by trying to identify the muscles that I've never seen before rippling all over his body. I consider myself an intelligent, reasonable person, but after one look at that torso, I'm having trouble deciding whether I want to paint him or eat food off of him. Take a look for yourself, why don't you.

Kind of hard to imagine why anyone would've cut that scene out of a movie, except out of kindness to the ushers, so they didn't have to peel people out of their seats at the end of the film. But there's also a real-person explanation for the scene ending up on the cutting room floor, courtesy of the film's director, Joss Whedon:

There was a 195-minute cut of this movie. The original scene was that Thor went to speak to the Norn and how it would work was that he'd go in the pool and the Norn possess him, basically, and Erik Selvig asks all the questions, and the Norn, speaking through Thor, give the answers. So, Chris got to do something different, and he really threw himself into it, and he did a beautiful job, but it wasn't well regarded by the test audiences and I feel it's probably largely because it was a rough cut with no effects, but also because it's something that in a Thor movie would work brilliantly, but in this movie is just a little too left of center.