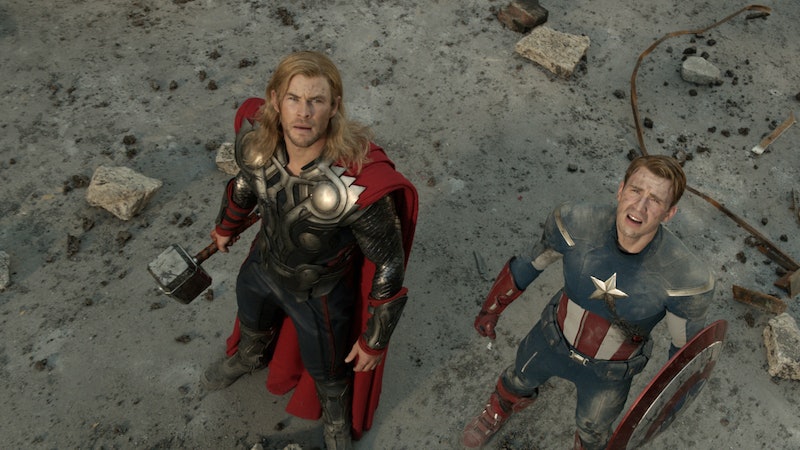 One of the best things about the Marvel Cinematic Universe is all of the actors that it brings together. I mean, Robert Downey Jr., Scarlett Johansson, Mark Ruffalo, Chris Evans, Chris Hemsworth, and Jeremy Renner all in the same movie? Yes, please. But even better than the film itself is the bonds that the actors make outside of it. For example, Chris Hemsworth and Chris Evans's bromance is literally the best thing I've ever seen.

Last time, the highlight of the Avengers press tour was Hemsworth and Tom Hiddleston's friendship. But with Loki's lessened role in the sequel, Hiddleston has been sadly absent from the press tour. Ordinarily I'd be sobbing into my hands about that, but his vacuum has allowed for the bond between the two Chrises to come to light — and it's amazing. The PR team clearly knows that Hemsworth and Evans are interview gold because they've been paired up during all of their media spots lately. Not that anyone is complaining!

Chris Evans has kind of always been in awe of Chris Hemsworth ever since they worked on Avengers together. Hiddleston once told a story about how Evans was fascinated with how Hemsworth got so ripped in the gym. But, this year, Evans has graduated from fanboy status to a legitimate half of a grand BroTP.

Here are nine times the double Chrises had the best bromance.

When They Were Both On Set

Having two Chrises is the best kind of problem to have.

When Hemsworth Was Evans' Biggest Fan

Oh, how the tables have turned.

When They Admitted They're BFFs

When They Arranged a Bro Date for Science Reasons

Those are very important questions and we need the answers. I'm glad Chris and Chris agree.

Everyone in the Avengers has kids except for Evans. So he's like their cool Uncle Chris.

When They Pretended They Hated Each Other

You're fooling no one, guys.

When Their Buddy Comedy of Choice Was Thelma and Louise

The pair was asked what a movie with just the two of them would be called. Evans nailed it with Thelma and Louise. Although Hemsworth's contribution of "Thraptain America" wasn't bad either.

When They Made a Bet With the Best Stakes

Similar to his bet with Chris Pratt, Evans and Hemsworth took sides on the Mayweather vs. Pacquiao fight, and the stakes were high. (But Evans is right. It's a total win-win for him.)

When They Met Onstage at the Premiere

Avengers: Age of Ultron doesn't come out until May 1, so I look forward to many more Chris and Chris shenanigans in the meantime. Those two are giving a whole new meaning to BroTP, and I love it.

More like this
Elizabeth Olsen's Chris Evans Friendship Update Was Accidentally Hilarious
By Grace Wehniainen
Laura Dern Said “Cultural Awareness” Made Her Rethink This 'Jurassic Park' Fact
By Grace Wehniainen
Colin Firth Revealed His Favourite Mr. Darcy (& No, It's Not Himself)
By Sophie McEvoy
Watch The Dramatic First Trailer For Netflix's Jennifer Lopez Documentary
By Alyssa Lapid
Get Even More From Bustle — Sign Up For The Newsletter