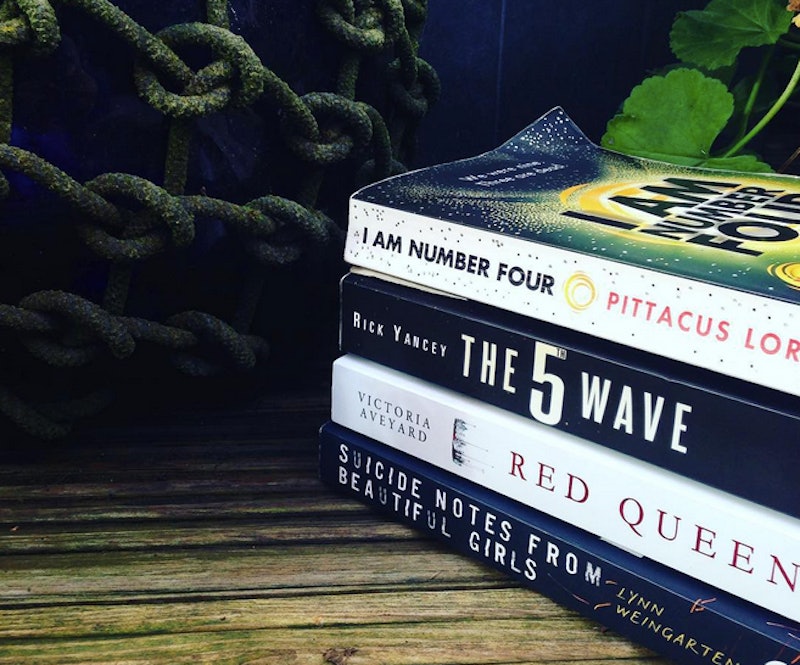 Our world may have just turned into a science fiction novel because Monday morning NASA announced that it found water on Mars. This major scientific announcement was teased Thursday when NASA sent out a press release stating "Mars Mystery Solved" using information from the NASA's Mars Reconnaissance Orbiter. This isn't the first time scientists have found water on Mars — ice has been found at the poles — but it is the first time liquid water has been discovered. It marks a turning point in the study of the planet and whether it could be hospitable to life.

"Our quest on Mars has been to 'follow the water,' in our search for life in the universe, and now we have convincing science that validates what we’ve long suspected," said John Grunsfeld, astronaut and associate administrator of NASA’s Science Mission Directorate, in the NASA announcement. "This is a significant development, as it appears to confirm that water — albeit briny — is flowing today on the surface of Mars."

As of right now, NASA still considers Mars "hostile" to life, but some scientists say this new water discovery could change the tides (pun intended). At the very least, this news will feature prominently as we move forward discussing NASA's "Journey to Mars," a mission to send human astronauts to the planet by the 2030s — which is in most of our lifetimes, unless the alien life forms decide to come attack us first, of course. My only lingering question is: Was Matt Damon involved in cultivating water when he was trapped on Mars?

In celebration of this landmark discovery, it's the perfect time to read one of these eight books about aliens, just in case the water news means that, yes, martians are able to live on the planet. There's no telling whether they're here to dominate the world like Independence Day or Signs or to be our BFFs and brooding boyfriends like E.T. or Roswell. We should probably be prepared for what this future might look like, according to these authors.

The War of the Worlds by H.G. Wells

No-brainer. H.G. Wells' classic story about martians invading Earth, which played on the radio scaring the collective bejeezus out of every American listening that evening? This is exactly what we should all be scared of right now. It's the most influential and first modern story of an alien invasion that has survived decades and a bad Tom Cruise movie adaptation. Basically we need to re-do that for today after this news and see how many people still fall for it. Ira Glass, will you take this on?

The 5th Wave by Rick Yancey

An alien race has essentially enacted genocide on the human race. Cassie Sullivan, her father, and her brother Sam managed to survive the first four waves, but when they're awaiting the 5th, things go haywire. Cassie Sullivan survived the first four waves must rescue her young brother from the enemy with help from a boy who may be one of them. When Cassie and her father's military survivors base comes under attack, Cassie escapes on goes on the run looking for her kid brother, who was carted off with the rest of the children. Yancey's story (and its sequels) explores life post-alien invasion, and trust me, it's just as scary and action-packed.

Ursula K. Le Guin is a goddess of science fiction, and her iconic The Left Hand of Darkness shows us all why. You can think of it like a reverse alien invasion book in which one human man travels to an alien world, called Winter. In this world, the aliens can choose and shift their gender, and Le Guin has a lot to say about what gender really means. It was first published back in 1969, but how Le Guin tackles stereotypes and pushes for inclusion could put it on the shelves today in 2015.

So, we should probably start training all the kids in how to battle aliens now that water has been found on Mars, right? Orson Scott Card imagined a future universe where that's exactly what Earth has done, after fighting wars against the alien race of "Buggers." And I gotta say, I'm not sure it worked out kindly for our young protagonist Ender Wiggin. The book and its author have been controversial from the outset, with some calling the book "Hitler apologia" and Scott Card, strangely, calling President Obama Hitler and opposing same-sex marriage. It can be even more interesting to read Ender's Game with these critiques in mind.

Teenage Binti is part of the marginalized Himba culture on Earth, but she has been given the opportunity to be the first of her culture to attend Oomza University — the university that would be like combining Oxford, Harvard, MIT, and Cambridge all into one prestigious school. However, on the journey to school on a faraway planet, Bindi and her fellow travelers are attacked by the Meduse, a nightmarish alien race. Okorafor, however, is less interested in good-versus-evil than finding peace among cultures and what drives hatred of alien (as in intergalactic beings and people from other countries/cultures) communities.

If you're hoping alien life forms will look more like smoldering hot teenage boys than green bodies with bulging eyes (or amoeba), Jennifer L. Armentrout's Lux series, starting with Obsidian, is directly up your alley. Katy wasn't on board with her move until she met the swoonworthy, but arrogant, new boy next door Daemon. And things got even more interesting when she figured out that he was an alien, and he's hunted by people across the galaxy who are looking to steal his powers. Obsidian is action-packed, but the hot romantic sparks are what really bring the book life.

The Martian Chronicles by Ray Bradbury

In Ray Bradbury's imagination, we Earthlings would be sending trip after trip to Mars by 1999. Though we're late, his tale of Martian colonization still echoes with the beauty of the planet. Earth has been decimated by an asteroid after decades of violence and turmoil. Mars is their hope, and so they colonize the planet and, in effect, inflict its troubles on the beautiful civilization and Martian peoples. The vignettes each tell a story of a group of humans' expedition to Mars or of their experiences once arriving, which are at times violent, and other times hopeful.

I Am Number Four by Pittacus Lore

Rather than through the eyes of space explorers or humans on Earth, I Am Number Four is told by an alien. Teenage John Smith and eight other Loric aliens have sought refuge on Earth, hiding from their enemies of the Mogadorian aliens. But one by one, the Loric aliens are being picked off. And now John, the fourth person on the list, seems to be up next. He's awaiting his emerging magical powers, which he'll need to use to fight against his enemies to save himself, his alien friends, and the entire human race on Earth.

The bottom line: We should all be super excited for this major NASA announcement of water on Mars, if for no other reason than it means we can all be as excited about science as we were when we learned it from Bill Nye.