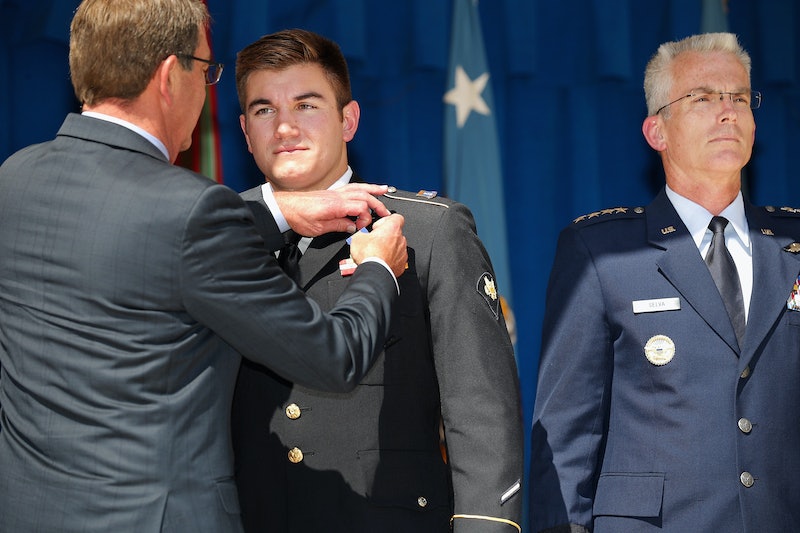 As an Army National Guard Specialist, joining Dancing With the Stars was an unlikely step for Alek Skarlatos. The 22-year-old snagged headlines after he and two friends, while on vacation after being deployed to Afghanistan, subdued an armed attacker on a Belgian train, but, so far, Season 21 of DWTS is working out for him. He and his professional partner Lindsay Arnold aren't exactly knocking the judges' socks off, but they also have yet to be eliminated (can't say the same for poor Chaka Khan and Victor Espinoza), so it's still anybody's win.

It seems the young man picked up a few dance moves overseas — either that or he was lucky enough to have been born with talent, good looks, and courage. Whatever magic came together to create Skarlatos, some fans are obsessed with him, and it doesn't hurt that he looks pretty damn handsome in uniform.

I predict the Oregon native, who also happens to be a painter and military history buff who wants to join the police force, is going to have to put the brakes on future career plans after DWTS. There's no way in hell producers from The Bachelor aren't going to want to scoop him right up and get him hooked up ASAP — especially with super-cute photos like the ones below.

Oh, hello there, did you just so happen to be hiking on this perfect day with the perfect amount of sweat making your shirt cling to your perfect rippling muscles? How very convenient.

If you just ignore that little bit about his "gf" this becomes a photo of a guy with a really cute smile who is about to practice shooting out in the wilderness like it's no big thing.

3. Is That Your Gun Or Are You Happy To See Me

I don't even like guns (really), and the humor here is definitely young, but the chest under that t-shirt kind of makes up for it.

4. Alek In A Waterfall

A photo like this one proves the man loves nature, can pull off wearing nothing but black boxers in public, and has a sense of humor about his "shrinkage."

It's a good thing he pokes fun at himself in his hashtags because, as cute as this is, Skarlatos has some kind of special lighting effect going on here — and it's quite dreamy. Also: brows for days.

I'm not sure what's more impressive: Skarlatos in the gym or a photo of Skarlatos' dad at the gym, which proves he is going to age like someone who isn't at all capable of aging.

A city that boasts "drugs everywhere" may not be his scene or his idea of a good time, but he seems to maintain a good sense of humor about it. I'm guessing this photo was taken seconds before he embarked on a 20-mile bike tour while shirtless. (Apologies, there is no photographic proof of that scenario.)

8. At A Press Conference

Skarlatos and friends Spencer Stone and Anthony Sadler deserved all of the recognition they received after their heroic act, and being able to deliver the facts with a charming smile like this is the icing on the cake.

Awesome angle, great shirt, and funny and sweet tribute to a dancing couple that might just go all the way.

It's anybody's guess whether Skarlatos will prove a one-hit reality star wonder or parlay his sudden fame into bigger projects — that is, assuming he even wants that. Judging by his looks and dancing talent alone, I predict this won't be the last anybody sees of him.