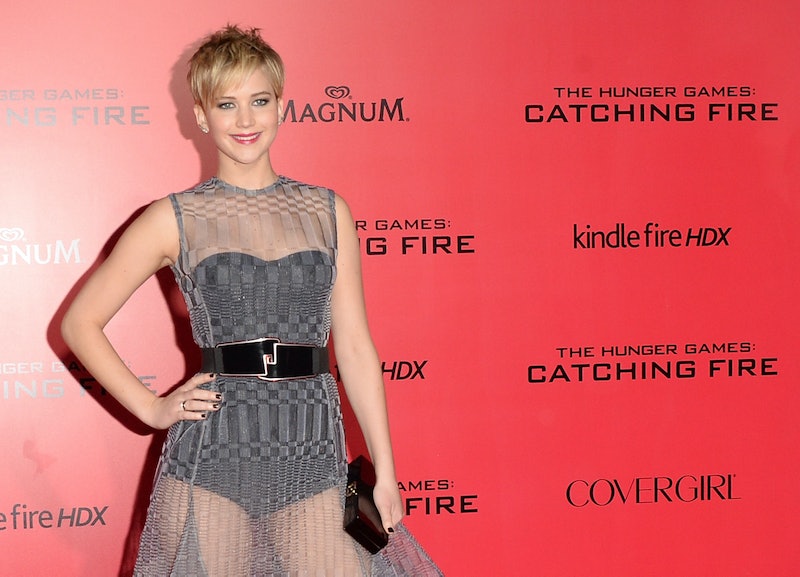 There's something to be said for those who don't feign shock and awe when one celebrity, famed for her brand of haterade, speaks ill of another, so without any sense of disingenuous surprise, let it be known that Joan Rivers is slamming Jennifer Lawrence at the most wonderful time of the year. Wednesday, Rivers told the New York Post that Lawrence needs to "grow up," which of course causes a knee-jerk reaction in most of us that resembles certain memorable YouTube videos — leave Jennifer alone! But is Rivers right? Are we just hopped up on the JLaw Kool-Aid?

After much soul searching, the answer is a resounding "no." There's a reason Lawrence is a media darling, and that's because she either manages or deliberately calculates her rise above the muck. True, Lawrence's remarks in November regarding body image and practices on show like Rivers' Fashion Police likely made her a target for Rivers; Lawrence said: "[these shows] are showing these generations of young people to judge people based on all the wrong values and that it's OK to point at people and call them ugly or fat." She later suggested that it should be "illegal to call somebody fat on TV." This totally reasonable, no-nonsense statement was turned into "celebrity feud" fodder, so of course, now Rivers has to fire back.

Making her usual argument — that the industry is the way it is, so suck it up, sister — Rivers said, "My New Year’s resolution is [ensuring] Jennifer Lawrence grows up and realizes how lucky she is and calms down." Of course, she followed it up with the justification that Lawrence enjoys the benefit of the superficial magic wand, Photoshop, and thus couldn't possibly be the right messenger for the "stop fat-shaming" movement. "I love that she’s telling everyone how wrong it is to worry about retouching and body image, and meanwhile, she has been touched up more than a choir boy at the Vatican. Look at her posters. She doesn’t have a nose, she has two holes. She just has to learn, don’t talk if you’re doing it," added Rivers.

Rivers has proved time and again she's got something of a free pass; her hurtful humor, like some more famous fat jokes about Adele, have brought out a few reactionary blog posts, but for the most part, she's still free to pop on TV with another basket full of insults. Being mean is her thing and we tend to just let her do it.

What's a bit more interesting is the way in which Rivers' comments about Lawrence bounce off the actress and back onto Rivers, who also told the Post Lawrence is "the next Meryl Streep." It's not that Lawrence is completely untouchable. Sure, the media loves to praise her for every little thing she does, but if she did something deplorable, it wouldn't go unnoticed. The issue is that unlike Rivers' other victims (Rihanna, Adele, and Justin Bieber, to name very, very few), who did nothing other than live their celebrity lives before getting the Joan Smackdown, Lawrence actually spoke about Rivers' insult practices and picked them out as something that's fostering body image issues in the U.S. Lawrence spoke up as a means of affecting change, rather than going with the hurtful flow. It makes more sense that Rivers would react, but it shook up business as usual — celebs completely ignoring what she says about them — and created an actual conversation about the old comedy standby.

So while Rivers has an arsenal of choir boy retorts at the ready — hell, that's why we know the name "Joan Rivers" in the first place — Lawrence was speaking frankly and touching on a rather important concept in contemporary media. It was refreshing that she didn't pull any punches when it came time to point fingers. Plus, Lawrence isn't simply standing on a soap box: she suffered from body image issues as a child struggling to become an actress. In October, Lawrence spoke out about the way in which body critiques from her childhood still hurt her to this day:

It was just the kind of shit that actresses have to go through. Somebody told me I was fat, that I was going to get fired if I didn’t lose a certain amount of weight. They brought in pictures of me where I was basically naked, and told me to use them as motivation for my diet.

And yes, publications and marketing folks have Photoshopped her and she knows it, but she's also the first to come out and say how unrealistic those images are and that no one actually looks like that in real life.

It's one thing to be the queen of mean, crude jokes and own it, which Rivers generally does effortlessly, but to keep up the back and forth, once Lawrence — one of the most influential voices in the world at the moment — has made it very clear that fat-shaming is not only a personal issue, but a very important issue for women everywhere, is beyond petty. Rivers has enjoyed executing plenty of punchlines in her ridiculously long career, does she need one more so badly that she's willing to tear down a woman who's doing something good for her fellow women? There's nothing comedic about that.

More like this
Olivia Munn Got Real About How Her Body Hasn’t “Snapped Back” Post-Pregnancy
By Stephanie Topacio Long
Lizzo Changed The Lyrics Of “Grrrls” Amid Backlash
By Maxine Harrison
Selena Gomez Explained Why A Past Album Cover Made Her Feel “Really Ashamed”
By Grace Wehniainen
Adele’s All-Female Lineup Includes Kacey Musgraves, Mahalia, & Self Esteem
By Shahed Ezaydi
Get Even More From Bustle — Sign Up For The Newsletter