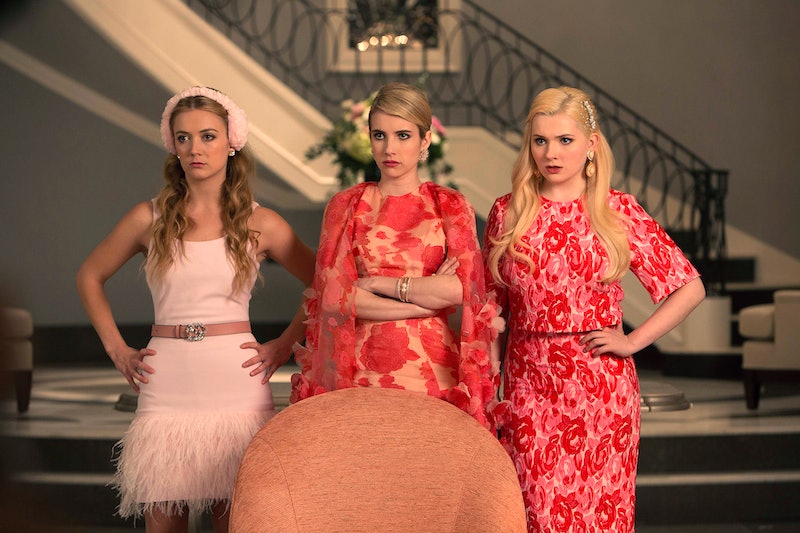 Scream Queens is here, and if you're anything like me, it's your new favorite campy-horror comedy with an all-star cast that makes Tuesdays a little bit better. After the first episode, it was pretty obvious that Ryan Murphy struck gold — again — and created a show that was hyped-up to the extreme for a good reason. Because while the show is inappropriate, racist, and gruesome, it is also hilarious, unexpected, and most importantly satirical. Emma Roberts, along with other cast members, have said some of the best Scream Queen one-liners (in only the first episode), that prove this show is unlike any other show on television now.

It's saying a lot that within the first two-hour premiere episode that this list can be filled with so many amazing quotes. The show is heavily satirical, and the characters aren't particularly likable. Because of this, the show has some one-liners that can be over the top (mostly coming from inappropriate queen bee, Chanel). With that said, the writing is fresh, and sharp, and edgy, and adding that to an all-star cast is probably why people couldn't stop talking about it after the premiere episode.

Here are the best one-liners from Scream Queens so far, because there are certainly many more to come.

1. When Chanel Turned A Negative Into A Positive

She's a pro at that classic interview question of "What would you say you're greatest weakness is?"

2. When Chanel Insulted The Barista

There's no doubt that Chanel is Queen of the Dig.

3. When Chanel Number 3 Was So Close

So close, Chanel 3. Just not quite.

4. When Zayday Asked The Question We All Wanted To Know

But, really. Candle vlogger does not equal candle eater, Jennifer.

5. When Chanel Gave This Offer

Although, Chanel doesn't really seem to have the same respect for her "sisters" with this awful greeting.

7. This Faces Of Death Reference

Gah, it makes me so uncomfortable.

8. When Chanel Number 2 Let Her Fingers Doing The Talking

Leave it to Gigi from nationals to make it all better.

Dorothy Parker would be proud.

If the kids are doing it online, then it must be cool, right?

12. When The Security Guard Asked This Kind Of Obvious Question

Because she couldn't put it in her purse... Come on, Denise!

14. And This Flawless Serial Reference

Don't get me started on the Nisha call.