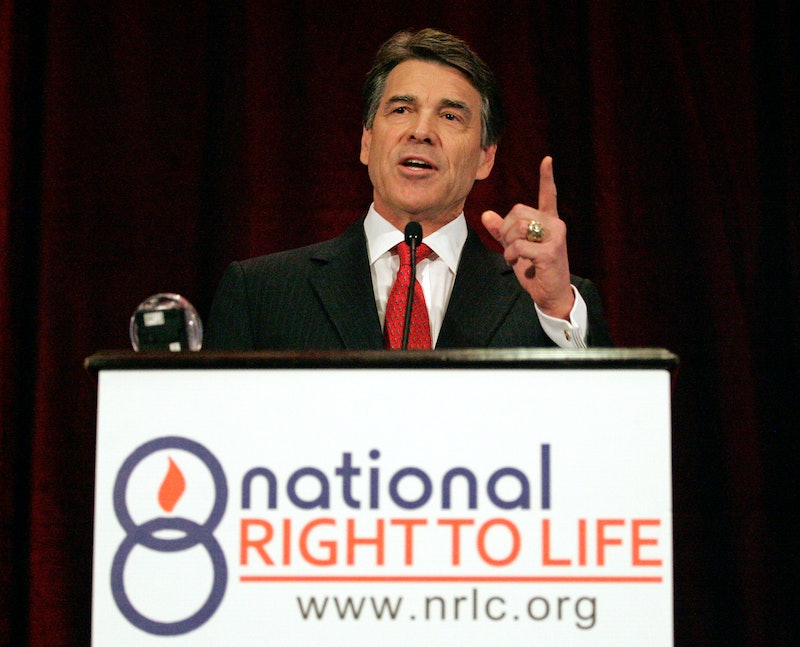 After what seemed like some very public criticism Thursday, Gov. Rick Perry is now claiming he was praising Sen. Wendy Davis, who filibustered for 12 hours against SB5, the restrictive abortion bill on the floor in Texas.

At the National Right to Life Convention, Perry used Davis as an example of a child " born into the worst of circumstances" who went on to lead a successful life.

"She was the daughter of a single woman, she was a teenage mother herself. She managed to eventually graduate from Harvard Law School and serve in the Texas senate. It is just unfortunate that she hasn’t learned from her own example that every life must be given a chance to realize its full potential and that every life matters," Perry said.

Perry's office has told the New York Daily News that he was “praising Sen. Davis for her success despite coming from difficult circumstances.”

Davis didn't see it that way:

Perry went on to call Davis' filibuster "nothing more than the hijacking of the democratic process." Which we'll also assume was a compliment? On Monday, another special session to debate the bill—ordered by Perry— will begin.

"Texans value life and want to protect women and the unborn...We will not allow the breakdown of decorum and decency to prevent us from doing what the people of this state hired us to do," Perry said in a press release.

More like this
What To Know About Martin Bashir After Watching 'The Crown'
By Bustle UK
Iran Has Issued A Death Sentence Over Mahsa Amini Protests
By Catharina Cheung, Darshita Goyal and Maxine Harrison
Amanda Gorman Shared A Powerful Message On Meghan Markle’s Penultimate Podcast
By Darshita Goyal
Claire Foy & Rooney Mara Revisit A Devastating Tale In 'Women Talking'
By Bustle UK
Get Even More From Bustle — Sign Up For The Newsletter