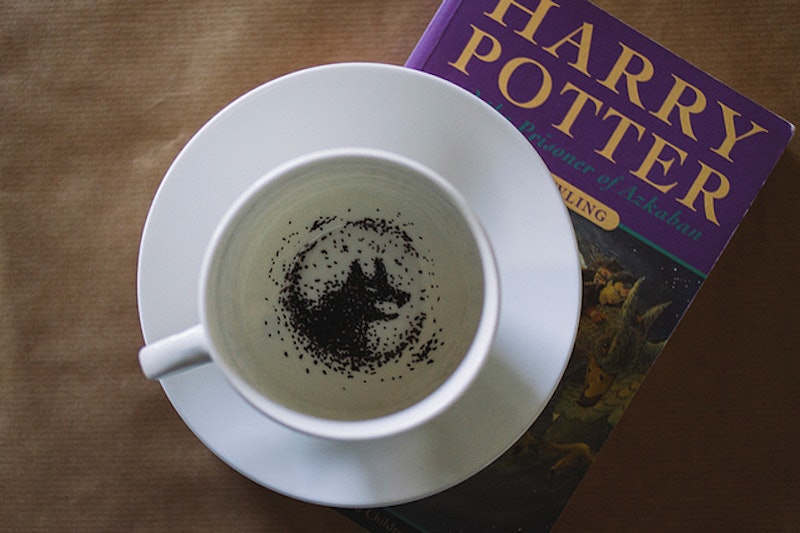 You might not have had the honor of walking the halls of Hogwarts and calling yourself a Gryffindor, Hufflepuff, Slytherin, or Ravenclaw, but that doesn't mean that you didn't learn anything from the magical wizarding world of Harry Potter. From The Sorcerer's Stone to The Deathly Hallows , the Harry Potter books taught us so many life lessons about... well, basically everything.

We all know how entertaining, fun, and unputdownable the Harry Potter books are, but little did we know that as we read them, they were actually shaping our lives, and not just as readers. Alongside Harry, Ron, and Hermione, we learned all about friendship and loyalty. Neville Longbottom taught us about bravery while Luna Lovegood showed us it was OK to be unique. We all probably learned more life lessons from Dumbledore than our own teachers, and even Severus Snape showed us a thing or two about love. The characters and their journeys over seven books (and our entire childhoods) have moved us, encouraged us, inspired us, and yes, taught us many valuable lessons about life.

Although I'm sure you'd love to, you don't actually have to be a wizard to learn any of these 21 life lessons that Harry Potter taught us.

Being "Cool" Isn't Everything

Hand-me-down clothes, frizzy hair, a giant lightning scar down your forehead? Doesn't matter, because being one of the "cool kids" isn't all that. From Harry to Hemoine, Ron to Neville, the best characters from the Harry Potter books were outcasts, never part of the "it" group, but they were the ones having the most fun and kicking the most ass. Sure, being popular could be nice, but it isn't everything.

True Friendship Can Survive Anything

Even when your friends don't believe you, even when you feel alone, even when you're mad or sad or angry with your bestie and you feel like you'll never forgive them, a true friendships will last through it all. Harry, Ron, and Hermione not only survived the normal troubles of adolescent friendships like jealousy and girl problems, but they also went through hell and back, fought off Dementors and Death Eaters, and won a war against evil — and stayed friends until the end. Sure, there were times where they didn't talk or seemed to grow apart, but in the end, real friends stick together though it all.

You Can't Believe Everything You Read

While you'd like to be able to believe what you read in the newspapers and in your text books, the reality is that just because it's printed doesn't mean it's true. People like Rita Skeeter are out there, and there are people like the Minister of Magic who will try and censor and manipulate the news. You can't always believe what you read, but you can look for the truth yourself.

A stuttering teacher can actually be a half-Voldermort, a lady dressed in pink might really enjoy torturing people, and a scary, giant, hairy guy could turn out to the kindest, gentlest person you ever know. People aren't always what they seem — and neither are mirrors, apparently. Harry Potter taught us to question everything, but especially what is right in front of us.

It's OK To Break The Rules

While you shouldn't throw the rule book out the window entirely, there are certain cases when breaking the rules is alright. Harry and friends were frequent rule breakers, and although they lost a few points for Gryffindor along the way, they saved enough lives to make up for it.

Education Can Take You To Wild Places

Yes, Hogwarts is a school for witchcraft and wizardry, but that isn't the only reason it was magical. Through their lessons, through their teachers, and through each other, the students of Hogwarts allowed their educations to take them on breathtaking adventures, teach them to defend themselves, and show them all the wonders of the world. Harry Potter taught us that education can be our keys to the world.

You Can Break The Mold And Forge Your Own Path

Although getting a degree, working hard, and starting a family is a popular course of action and a very fulfilling one, it isn't for everyone — and that's alright. Fred and George Weasley taught us that sometime, we need to choose our own paths, and although it might not be the most traditional one, it has to be one that makes us happy. After all, what would the world be like without people who strayed from the norm?

Remarkable characters like Luna Lovegood and Hagrid taught us all that marching to the beat of your own drum is not only okay, but completely wonderful. Not everyone can be a Prefect, but in the magical world of Harry Potter, and the magical world we live in, that's okay.

Never Be Afraid To Stand Up For What You Believe In

For most of the Harry Potter books, there were only few people who believed that Voldermort was still alive, but Harry never backed down. Even when he was labeled as "The Boy Who Lies", even when his closest friends doubted him, Harry never cowered. He, and may other characters (here's looking at you, Neville) taught us that we should all be steadfast and strong in what we believe, even if others doubt us.

But Don't Be Afraid Of Change, Either

While it's important to stick to your beliefs, it's equally important to be open to other's ideas and opinions, and to be open to change. If Professor Umbridge and the Ministry of Magic taught us anything, it is that holding tightly to something you believe when the world needs something else can have terrible, and sometimes deadly, consequences.

Death Isn't Something To Be Feared

When you live in the world of Harry Potter, death is around every corner, or, for readers, around every turn of the page. Life is unpredictable and often too short, but Harry Potter taught us that death itself isn't something to be afraid of, but instead "the next great adventure" — or so says Dumbledore.

You know that old saying, you can pick your nose, but you can't pick your family? Well, Harry Potter proved that wrong by teaching us that blood isn't what makes a family, love is. While your blood relatives can be a great group of loving, supportive people, they can also be a bunch of horrendous, abusive jerks (see: the Dursleys). If you're unlucky enough to have the latter, or no family at all, then Harry Potter showed you that you can create a family of your own by surrounding yourself with people you love and who love you back.

The One You Love Won't Always Love You In Return

Heartbreak is inevitable, and Harry Potter was great at teaching us this sad but true fact. Whether it was Lavender's young, broken heart by the hands of Ron or Snape's undying and unrequited love for Lily, the Harry Potter books prepared us for the harsh realities that sometime the ones we love just don't feel the same. They also showed us that, even after the worst heartbreak, we can move on.

Especially when you are young, it's easy to think you know it all, and your parents, teachers, or employers are wrong. The truth is, as proven by Harry Potter, than those older than you tend to know a thing or two more about life than you, and can hand out some pretty great advice. Dumbledore, Professor McGonagall, and Lupin were elders who, instead of patronizing the younger folks, were able to guide them with love and priceless wisdom.

Sometimes, They Really Don't, Though

Though older people know better than you sometimes, there are others that they really, truly don't. Professor Umbridge is a shining example of an elder whose words, rules, and beliefs should be not only taken with a grain of salt, but ignored completely. And remember Cornelius Fudge, the Minister of Magic who refused to believe in Voldermort's return? Yeah, sometimes your elders don't know squat.

When it comes to happiness and fulfillment, the Weasley family taught us that money isn't the key, but friends and family are. Though they wore hand-me-downs and lived in a cramped house, the Weasley's were a loving, generous, and, most of all, happy family. Meanwhile, the Malfoy's had a vault full of Galleons and a lifetime of sadness and loneliness. Money can buy a lot, but as the Harry Potter books prove, they can't buy happiness.

Love Never Dies, Even When People Do

When love is deep and true, like the love between Harry and his parents or the love of Snape for Lily, then it can't be killed. Love, true love, is unending, even though life isn't, because as you already know (or have tattooed somewhere), "the ones we love never truly leave us."

Your Real Friends Will Always Have Your Back

Whether he was facing a deadly creature or an entire army of evil wizards, Ron and Hermione were always there to help Harry. There was nothing they didn't do together, and nothing they wouldn't do for one another. Even when the trouble wasn't magical but personal, the three friends always had each other's backs, proving that your true friends will always be there for you, too.

But There Are Some Demons You Have To Face Alone

There are some battles that we have to fight by ourselves and some enemies we must face on our own. Despite the help of his friends, Harry continually found himself facing his foes one on one at the end of a book, and he proved that we won't always have help when we're in trouble. There are somethings we will have to do on our own. The important thing, though, is knowing that we can.

Love Is The Most Powerful Force Of All

Harry's parents' love for him saved him from most certain death as a baby, but that is only one of the many times love conquered all. Against hatred, against fear, against violence, against it all, the love Harry and his friends carried for on another won, teaching us just how powerful it can truly be.

Seriously, it is, and not just in the spell casting kind of way. Harry Potter proved their is magic in everything, from the books we read to the friends we keep to the people we fall in love with. You might not be able to get to work via fireplace, but that doesn't mean you can't find the truly magical things in life, because they're all right in front of you.