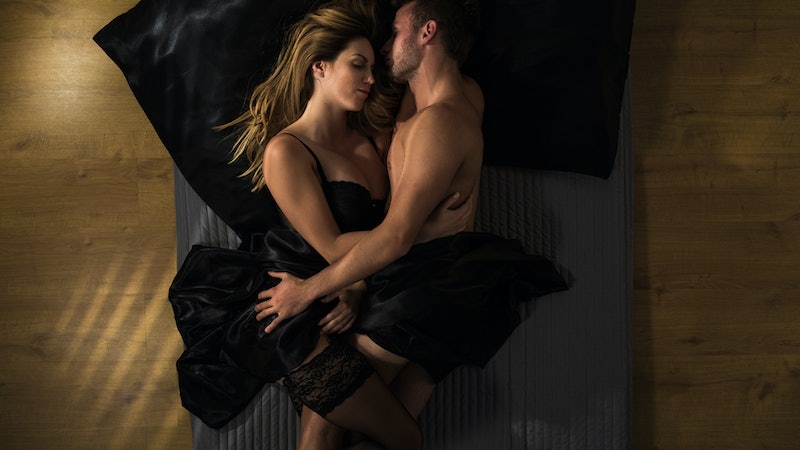 Sex is nature’s remedy to most, if not all things. Studies upon studies have proven how sex benefits your body, and the more of it you have, the better your body and brain are for it. Sex isn’t just for procreating, people; it’s for making your life healthier and longer lasting. A body that has enjoyed lots of sex can stand the test of time.

While we’ve already covered what happens to your body when you have a lot of orgasms, sex doesn’t always result in an orgasm. Does this mean that you’re not reaping the benefits that come with having lots of sex? Hell no. Even an active sex life that doesn’t always end in an orgasm still gets to enjoy all the great physical and mental health benefits that come with doing it as often as possible. Listen, if Mother Nature didn’t want us to constantly be hooking up, she wouldn’t have made sex so damn good. By this rationale, it's our duty to have lots of it.

So instead of rolling over and going straight to sleep tonight, why don’t you have some sex first, you know, for your health. Here are ten things that happen to your body when you’re having lots of sex.

Sex helps depression in two ways. The first way is the one we already know: It releases all the necessary hormones to make someone just feel so much better. But the other way that sex, most specifically unprotected sex (as in, it's probably best you to be in a monogamous relationship for this one) helps depression, is that semen is actually an antidepressant.

Studies have found that semen contains all that important stuff like endorphins, oxytocin, and serotonin (among other components) that can lessen depressive episodes, and just makes people feel better about themselves and the world around them.

2. Your Heart Gets Healthier

According to the Center for Disease Control, the number one cause of death in women, at 22.4 percent, is heart disease. What this means is that you owe it to your heart to have more sex and not become a statistic.

Several studies have found that heart health can be improved by having lots of sex, because both the activity and the orgasm is an awesome workout. A moderately intense sexual romp exercises your heart in the same way that walking four to six miles an hour does. I don’t know about you, but sex sounds more fun to me.

While the hormones released during an orgasm elevate your mood, leading to less stress and depression, sex, being an aerobic activity, lowers blood pressure and just helps you relax. It’s also been found that when people are in healthy relationships and getting it on all the time, they have less emotional issues like loneliness, anger, and anxiety.

Not only does having sex make us feel sexier and more desirable, but physically, sex makes us prettier, too. During sex, blood rushes to our face and head, giving us both that lovely flushed look and even nourishing the roots of our hair. Nourished hair, epic bedhead, and a delightful afterglow — what more could you ask for?

5. You Deal With Pain Better

Again, orgasms come into play with this one, but so does sex because of the intimacy factor. A 2011 study found that when people look at a loved one, their tolerance for pain increased. The study out of Stanford discovered a link between pain and emotional attachment, in that even seeing a photo of someone we love reduces pain by 44 percent ― “as much as cocaine,” according to the study. If looking at a photo can do that, what do you think having sex with your partner, while looking into their adorable face does? Lots of good things.

According to a study of college students by Wilkes University, those who had sex at least once or twice a week had higher levels of necessary antibodies to keep the immune system working properly, than those students who weren’t having sex. It’s also been found that those who have sex regularly take far less sick days than those who don’t have sex all that much.

7. Your Memory Will Get Better

A 2014 study by the University of Maryland found that people who have sex often actually grow brain cells. In brain cell growth, you become smarter and your memory increases. In other words, you’ll finally stop forgetting where you left your keys.

8. Your Vagina Will Get Super Strong

Your vagina is already badass enough on its own, but when it gets a lot of exercise, it becomes even stronger. When you have sex, you exercise your pelvic floor and a strong pelvic floor leads to better orgasms, the ability to hold your pee longer, and, as you get older, it helps to keep your organs in place. No one wants their uterus to be dangling out from between their legs because they’re not having enough sex, do they?

Having lots of sex makes you want more sex. With sex constantly on the brain and all those happy and healthy hormones pumping through your body, all that sex will boost your libido making you even more sexual than you already are. World, look out.