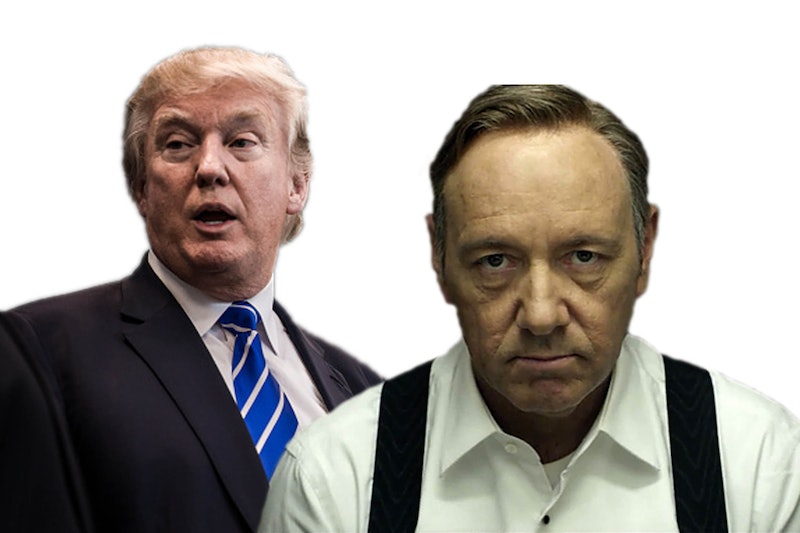 Kevin Spacey has a few (hilarious) things to say about Donald Trump. When asked by CNN's Dana Bash at a charity gala on Monday night whether his House of Cards character, President Frank Underwood, would be able to beat billionaire real estate mogul and 2016 GOP candidate Donald Trump in a televised debate, Spacey said that Trump, like Underwood, was a "fictional character," eliciting loud applause from the crowd. Spacey then added that, even on the off-chance that such a debate actually took place, Trump would never make it to the venue, for one very good reason.

"I don’t think The Donald would ever make it to a debate with Frank Underwood, because Frank would kill him," said Spacey, referring to his character's history of murdering or ordering hits on anyone who stood in his way to the White House. Mimicking Trump himself, Spacey then joked, "It'd be huge — such a huge death!"

At the Monday night gala, which benefited the Kevin Spacey Foundation and the Cal Ripken Sr. Foundation, Spacey also lamented that the current state of politics was deterring young people from engaging in or applying to work as public servants. "I think it’s particularly hard nowadays for young people to see and look at our political process and be inspired by it," he said. "I hope that the fact that not a lot of shit [gets done] doesn’t dissuade people from wanting to join public service, whether it’s running for office or doing anything you can to help other people."

It was a bold statement, and certainly truthful in many ways. In a survey of some 4,000 young Americans was conducted by authors Jennifer L. Lawless and Richard L Fox for their 2015 book Running from Office: Why Young Americans Are Turned Off to Politics, it was found that just 11 percent of young people had considered running for public office "many times." On the flip side, over 60 percent said that they had "never" considered it.

But enough about surveys. Let's get back to the question that matters most: If Trump did manage to make it to a debate with Underwood unscathed (assuming that Underwood had suddenly become a real person), could he really win? No matter how much he might insist otherwise, let's be real for a second here: There's honestly no way Trump could never plausibly beat Underwood.

First, there's the the simple fact that Frank Underwood can actually articulate his thoughts. Consider that moment in House of Cards season one, when he explained the ridiculous thought processes by some in high-ranking government positions. "Proximity to power deludes some into thinking they wield it," he told the viewer. Trump, on the other hand, is the same candidate who, in his campaign kickoff speech this past June, actually said (verbatim):

I have so many websites, I have them all over the place. I hire people, they do a website. It costs me $3. $5 billion website [sic].

Points to Underwood for delivering a coherent response. (No points for "do a website" ... Sorry, Trump.)

Then there's Underwood's willingness to reach across the aisle. Alright, he was only doing it to blackmail the Republican leadership and cull votes for his own pet project, but still, Underwood was able to reach out and garner support from his GOP counterparts. And for his seeming role as a middle-ground, smooth-talking Southern politician that can appeal to both sides, he at least wins half a point.

Conversely, instead of trying to play well with others, Trump seems to be purposely making enemies on all fronts, both across the aisle and within his own party. When he's not picking on Hillary Clinton by making wisecracks about her husband's affair, or starting Twitter fights with key conservative figures like Fox anchor Megyn Kelly and war veteran Sen. John McCain, Trump is busy smacking down anyone with whom he might happen to disagree — including the public itself.

"I'm so tired of this politically correct crap," Trump told an audience of business leaders at a conference in South Carolina last week. He then added emphatically,

This is what bothers me about politicians. [Jeb Bush] announces he's gonna run and they go [...], "What do you think of Marco Rubio?" "He's my dear, dear friend, he's wonderful, he's a wonderful person, I'm so happy that he's running." Give me a break. That's called politicians' speak. Then they go to Marco, what do you think of Jeb Bush? "Ohh, he's great, he's brought me along." They hate each other!

Zero points to Trump for not being able to be a grown-up about anything at all.

Last but not least, there's the obvious: In a debate between Trump and a real-life Underwood, Underwood would win simply because he understands what the government is and how it works. Trump, much to the despair of his campaign staff and half of America, not only misunderstands the basic fundamentals of the legislative process, the Constitution, and foreign policy, but also relishes that ignorance.

In a recent radio interview with conservative host Hugh Hewitt, Trump lamented that people were asking him, you know, normal questions that should be asked of anyone hoping to become the leader of the free world — specifically, questions about Middle Eastern leaders and militant movements. When asked whether he knew the major players in the region, Trump exasperatedly told Hewitt,

I think by the time we get to office, they’ll all be changed. They’ll be all gone. I knew you were going to ask me things like this, and there’s no reason, because number one, I’ll find, I will hopefully find General Douglas MacArthur in the pack. I will find whoever it is that I’ll find, and we’ll, but they’re all changing, Hugh. ... that is a gotcha question, though. I mean, you know, when you’re asking me about who’s running this, this this, that’s not, that is not, I will be so good at the military, your head will spin.

Go ahead, take a moment to bang your head against the wall.

Whether Trump wants to admit it or not, there's no plausible way the brash mogul could ever beat out anyone in a battle of wits, especially one that has as much time on the Hill as Frank Underwood ... even if he is a fictional character.