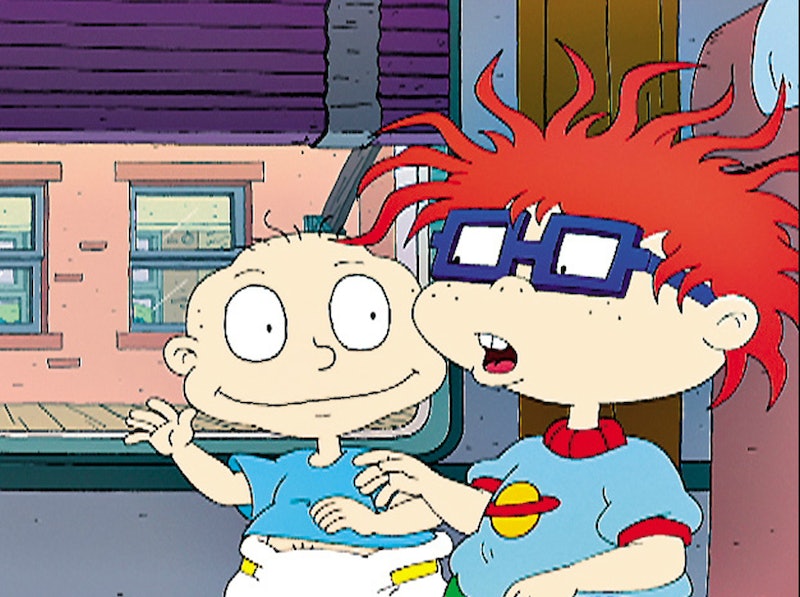 Who knew that a bunch of cartoon babies would be so inspiring? As unlikely a premise as the Rugrats might have seemed, it's remains an iconic cartoon and even created one of the '90s Nickelodeon characters we all related to, Angelica Pickles. The shows influence was so strong that almost 25 years after it debuted, it's still a pop culture touchstone for many.

In case the show slipped your memory, it centered around the lives of a group of babies/BFFs: Tommy Pickles, Chuckie Finster, Phil and Lil DeVille, and Tommy's cousin Angelica. While the babies often got into entertaining mischief, the contrast between their storylines and that of the adults also created humor. It was a unique perspective from which we saw the world, and the show ended up releasing 172 episodes of 9 seasons. Additionally, there were two Rugrats movies and a crossover film with The Wild Thornberrys. Rugrats even inspired a spinoff, All Grown Up!, which showed the famous characters as tweens.

With the Splat, Nickelodeon's '90s revival channel coming in October, now is the perfect time to look back on the best Rugrats episodes. There were a ton of amazing options, but here are the top 21, in no particular order.

This classic episode reimagined the babies' lives if Chuckie had never been born.

Phil and Lil's forced separation was heartbreaking and reminded us why they're such an awesome duo.

Angelica fell for a bad boy — in this case, a 4-year-old biker who was a James Dean in the making.

Everything about this episode is gold, down to the Beauty and the Beast love story.

Who can forget the epicness of when the babies went inside Chuckie to retrieve a watermelon seed, only to find Angelica watering it?

Of course Angelica's cat is a total princess. Hilarity ensues.

All it takes is one trip to the museum to implode a dinosaur skeleton.

Another classic episode finds the babies inspired by a cardboard box. Who didn't look at empty appliance boxes differently after watching this?

The Rugrats taught us to be a little less afraid of the doctor with episode.

10. "The Seven Voyages Of Cynthia"

Poor Cynthia had a tough go of it, but never more so than when Chuckie and Tommy accidentally lose her.

The oft-quoted Dr. Lipschitz arrives to shake things up.

The Rugrats take adult phrases like "pushing paper" literally when they transform into adults.

One of the show's best child-like take on an adult concept was when Angelica covers herself in her mother's vanishing cream and thinks she actually disappeared.

Alex Trebek as a Rugrats character!

The poor dog groomer had no idea what was coming when she agreed to spruce up Spike.

Angelica faked an injury only to be misdiagnosed with a broken leg — but ultimately learns her lesson.

It's the end of the world as the Rugrats know it.

Pat Sajak makes a cameo to give the Finsters $10 million.

Angelica helps turn Tommy into a bad boy to rebel against his parents.

Nothing is better than when Angelica is frightened by her own power or, in this case, when she thinks she made Lil disappear.

The two most polar opposite characters, Chuckie and Angelica, are paired together when she accidentally cuffs their wrists.

Let's be honest: Every episode of Rugrats was great.

More like this
'The Ex-Wife’s First Look Pics Are Giving 'Gone Girl' Vibes
By Bustle UK
These 25 International Horror Movies On Netflix Prove Fear Is A Universal Language
By Bustle Editors
24 Years Ago, 'Friends' Dropped Its Most Underrated Ross & Rachel Episode
By Grace Wehniainen
Netflix Reveals First Look At Wednesday In The 'Addams Family' Spinoff Series
By Bustle Editors
Get Even More From Bustle — Sign Up For The Newsletter