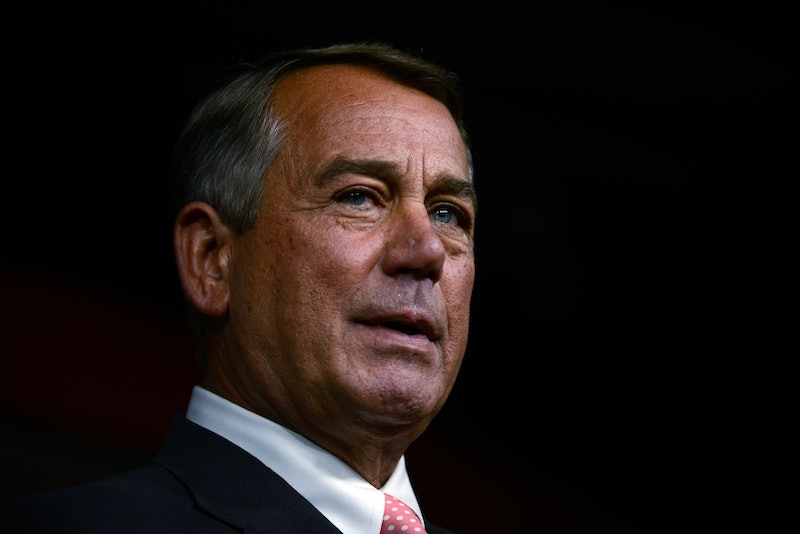 Last week, House Speaker John Boehner announced that he will step down from his prominent position in the Republican Party leadership at the end of October. As if the Republicans haven't had enough chaos on their side of the race, some have wondered whether Boehner's resignation means he might now run for president. If he runs — and wins — he'd be somewhat of a trailblazer. Only one Speaker of the House has been elected president, and you'd have to really crack open your history books to find out who it was.

A Democrat from Tennessee, James Polk served as Speaker of the House from 1835 until 1839. Then, after a brief stint as governor of Tennessee, Polk went on to serve as president of the United States from 1845 until 1849. The decision to run wasn't entirely up to him, though. He attended the Democratic nomination convention in 1844 with the hope of becoming the nominee for vice president. Instead, his plan to expand the country westward won over the convention and he was nominated for the big-ticket job.

For his part, Boehner has said that he won't run for president (although look how well that worked out for Polk). In 2014, Boehner told Jay Leno that he wouldn't run because he doesn't want to give up playing golf, mowing the lawn, drinking red wine, and smoking cigarettes. Or maybe that's just what he wants us to think...

There has often been speculation about why more Speakers don't run for, or become, president. The best explanation I've seen is this: By nature, the role of Speaker of the House labels you as one of the most partisan figures in Congress. Partisan values might serve a candidate well in the primaries, but the highly partisan record of a Speaker could destroy a candidate's chances of winning over the general population as a whole.

In Boehner's case in particular, he'd be jumping into a race where tried and true politicians aren't necessarily succeeding. According to the most recent polls, the top three Republican candidates have never held public office: Donald Trump, Ben Carson, and Carly Fiorina. That's definitely not a good sign for one of most visible political operatives of today's Republican Party.

There's also the question about whether or not anyone who launches a campaign now, after missing two debates, could win over the already fragmented Republican constituency. That's where Boehner's name recognition and visible record within the party would come in handy... but it probably won't. Ultimately, it's unlikely that Boehner will run, but it's good to know that if he did get elected, he wouldn't necessarily have to give up his golf game.