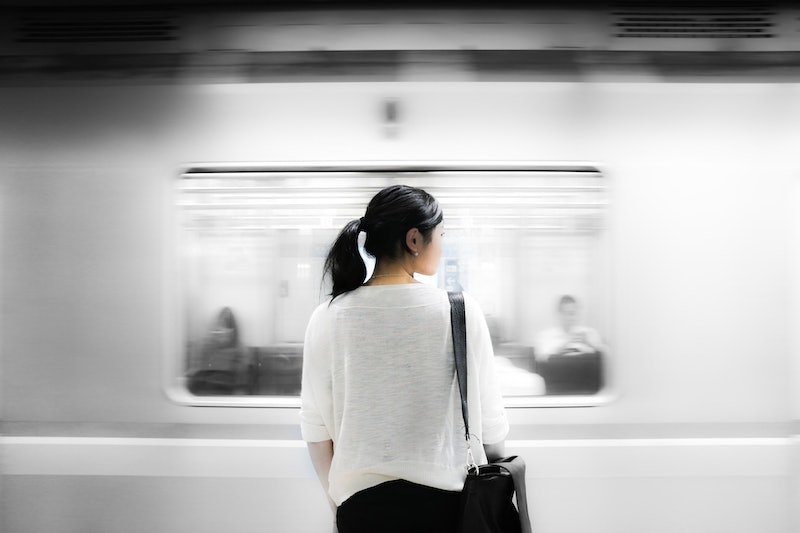 There's no getting around it — life is full of stress, anxiety-inducing situations and other events that make your palms sweat. Some of us are more prone to nervousness than others, but even the most laid-back people have their times of feeling seriously anxious. Whether it's right before an important interview, a major presentation at work, or a stressful family gathering, we're all familiar with the unpleasant feeling of our nerves going haywire. But anxiety isn't purely mental — a variety of weird things happen to our bodies when we're nervous. Unfortunately, these physical responses are pretty undesirable and often serve to make us more stressed out.

So, why won't our bodies chill out when we're nervous? It would be nice if they could cut us a break! Well, as it turns out, we're not quite as evolved as we may think. Historically, the stressors in people's lives were related to imminent physical danger and therefore a physical response was required. Our ancestors had to outrun actual predators — and our bodies haven't caught up to the fact that our modern day stressors are typically work, relationships, and finances (rather than an angry lion). All of those things certainly cause legitimate stress and anxiety — but they don't actually leave us running for our lives and fighting for survival. So, uh, I guess that's something to keep in mind the next time your boss is yelling at you or your bank account is looking sadder than usual?

Here are six weird things that happen to your body when you get nervous — keep an eye out for them the next time you have to do something really anxiety-inducing (like, say, finally telling your parents about your tattoo):

A racing heart is one of those super fun side effects of anxiety that can often make you feel more nervous. Heart palpitations are caused by the surges of adrenaline that accompany anxiety. Additionally, the sympathetic nervous system becomes hyper alert when you're nervous, and that can make your heart race. And if you tend to hyperventilate during times of stress, that will also lead to a racing heart.

The good news is: heart palpitations related to nervousness aren't physically dangerous. They're miserable and scary, but in the long-term, they are harmless to your physical health.

Breathing exercises can be extremely helpful when it comes to calming down your heart and your nerves. As someone who is prone to both anxiety and the accompanying heart palpitations, I was initially skeptical that something as simple as a breathing exercise would make much of a difference. Luckily, I was proven wrong. They aren't magical, but try these tips to bring down your heart rate next time you're feeling anxious.

Don't you love it when you're super nervous about a job interview or meeting someone new and your palm is completely sweaty when you go to shake their hand? Yeah, me neither. Once again, we can blame our ancestors and their tendency to frequently end up in "fight or flight" situations for this fun physical problem.

When stress hormones are activated, they prepare your body to take action and respond to the perceived danger. We perspire more when we're stressed because it allows the body to get rid of water through the skin rather than the kidneys (apparently our ancestors didn't have the luxury of taking bathroom breaks when they were being chased by predators). Stress also sidetracks your blood flow to the parts of the body that are critical to taking emergency action — so your body temperature is likely to increase when you're stressed, and sweating is simply your body's attempt to cool you down.

Many of us breathe more rapidly when we're nervous. When this happens, your body understandably thinks you're simply not getting enough air, and makes you yawn — because yawning is its way of giving you a much-needed deep breath. There's also a domino effect that causes anxiety-induced yawning: The other physical changes associated with nervousness, such as respiration, heart palpitations, and muscle-tightening, can lead to excessive yawning.

Well, at least this side effect makes excessive sweating seem like a complete joy in comparison. When your nervousness causes you to breathe more rapidly, your body takes in way more air than it's ordinarily accustomed to. So you can't blame your body for needing to get rid of that extra air. (Just kidding, you totally can — who really wants to hold in a fart while they're giving a super important presentation at work or school?).

Your breathing isn't the only thing that leads to flatulence during times of stress. The acid in your stomach tends to swirl when you're anxious, and that causes both gas and burping. Plus, many of us rush through certain tasks when we're nervous — including eating and drinking. So at least we have a little control over that part — try not to rush through your meals or down your beverage in one swig when you're stressed. Your already-beleaguered gut will thank you.

Plenty of us have had the joyful problem of getting a massive zit (or five) during finals week or any other period of intense stress. You probably accept it as a fact of life — but have you ever wondered why exactly it happens? When you're nervous, your body secretes more cortisol than usual, which causes the glands beneath your skin to generate more oil. Then, presto! Extra zits.

But there are other skin conditions that can also be caused or exacerbated by ongoing stress. Since many skin problems are caused by inflammation, stress triggers outbreaks. Psoriasis, hives and rashes are more likely to flare up when you're dealing with anxiety.

Plus, sometimes we neglect our skincare and health regimens during times of stress — we're less vigilant about moisturizing before bed and we start eating not-so-healthy foods as a coping mechanism. And although we've all been told since middle school to not touch or pop a zit, some of us have nervous habits like poking or itching our skin when we're anxious, which only makes skin problems worse.

When stress overwhelms you, you may find yourself feeling as though you're in a dream-like state and your surroundings aren't real. You can successfully go through the motions of the task at hand, but it doesn't feel as though you're actually the one in control. This unnerving out-of-body experience is called depersonalization and it's difficult to explain to others who haven't experienced it. But if it's happened to you, rest assured that you're not crazy —and you're far from the only person who has dealt with it.

If you frequently experience depersonalization when you're nervous, it could be a sign that you have anxiety disorder and it's probably worth speaking with a doctor. They'll be able to assess whether you're suffering from an anxiety-related condition and provide treatment options.

So while the things that happen to our bodies when we're nervous aren't very fun, they're totally normal. At least you've got that to comfort you the next time you're sweating through your clothes during a presentation, right?