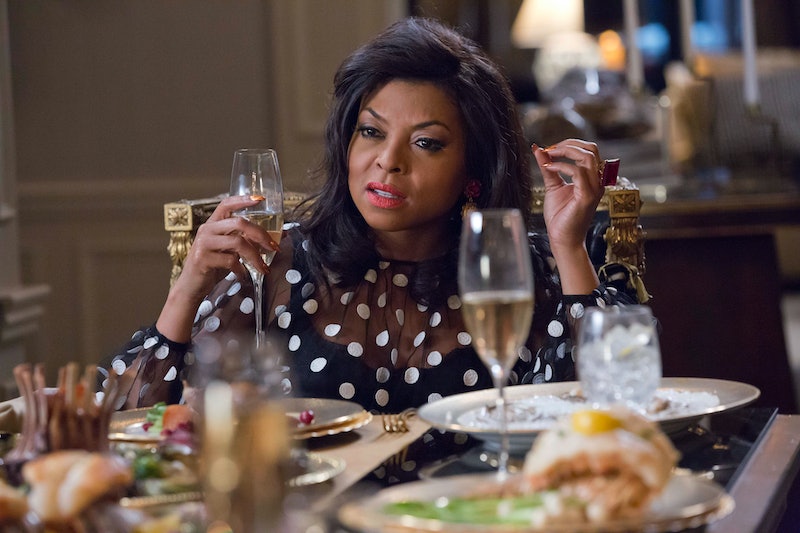 One of the featured songs from Empire 's Season 2 trailers would have me believe that "it ain't about the money, it's about the power." But it's pretty hard to overlook the impact of a plush television contract. Just ask the cast of The Big Bang Theory, some of TV's highest earners. Empire's ensemble may be moving in a similar direction, since the show's skyrocketing ratings haven't found their ceiling yet. The Season 2 premiere pulled in the series' largest audience yet with 20.8 million viewers, including Live and "+3," according to Deadline. Numbers like this are increasingly rare now that there are so many TV shows for viewers to choose from. Still, FOX has established the series as a weekly must-see event, and the Empire cast's salaries may have room to negotiate thanks to all of that success.

Besides, the show is just warming up. As a mid-season series, Empire only aired 12 episodes in its first season. The audience was there from the start, and has only grown week to week. Besides live ratings, the show can also see the power of its fans' fervor in music downloads and streams. "Good Enough" from the Season 1 soundtrack has been streamed over 12 million times on Spotify, for example. Empire is a full-fledged cultural phenomenon and is making a lot of people a lot of money. So what kind of salaries is the cast bringing home?

Howard's salary is a point of contention in his personal life. His ex-wife Michelle Ghent has claimed that he's not providing the spousal support he's required to, and TMZ reported that she subpoenaed his Empire contract to prove he could. According to that report, the actor was taking home $125,000 per episode early in the series, though it's possible he's renegotiated that agreement since then. In August, People reported that a judge ruled in Howard's favor regarding their divorce agreement, saying the actor signed it under duress and that the former spouses will have to come up with a new agreement. In a statement to ET Online after the ruling, Howard said, "I could not be any more pleased by today's ruling ... Judge Lewis's thoroughness and understanding of the law was apparent at every turn in these proceedings, and I am grateful to the Court for its efforts in resolving my case. I am also grateful to my family law attorney Brian Kramer (and the professionals on his team) whose skill and tireless efforts enabled me to secure a terrific ruling from the Court."

As for Howard's on-screen ex, Taraji P. Henson, Radar cites unnamed sources who claim that she "initially signed a five-year deal" for low six figures. Though that is not confirmed, Cookie Lyon is the breakout character of Empire, so Henson would presumably have the most bargaining power to angle for a raise.

Howard and Henson both walked into Empire with name recognition and long resumes. The up-and-coming actors playing their sons are likely on the next level of the show's salary structure, though that information hasn't been made public. Gray, at least, knows what he wants to do with that money. He told TMZ he's saving up to buy his mother a house. Aw.

These four featured ladies orbit the Lyon family: Gealey as Anika; Doubleday as Dre's wife Rhonda; Jones as Cookie's assistant Porsha, and Sidibe as the loyal and unimpressed Becky. Jones and Sidibe were promoted to series regulars in advance of Season 2, which certainly warranted a reestablishment of their terms. This promotion probably puts them on a similar earning level with the other two women.

Empire salary numbers will likely be a topic of public conversation when the eventual pre-syndication negotiations kick off. And if the show is still riding as high in the ratings when that happens, the cast salaries' might even rival Big Bang. And to catch up on everything that turned Empire into such a success, check out the Season 1 recap video below.

More like this
Gabourey Sidibe Wore A Traditional West African Wedding Dress On The Cover Of Brides
By Dominique Norman
Here’s Where Caitlin Atwater Is After HBO Max’s ‘The Staircase’
By Brad Witter and Lindsay Denninger
What’s New On Netflix: A Victoria Justice Rom-Com & The Return Of David Letterman
By Arya Roshanian
What’s New On Netflix: The Return Of 'Bling Empire' & A Rebel Wilson Comedy
By Arya Roshanian
Get Even More From Bustle — Sign Up For The Newsletter