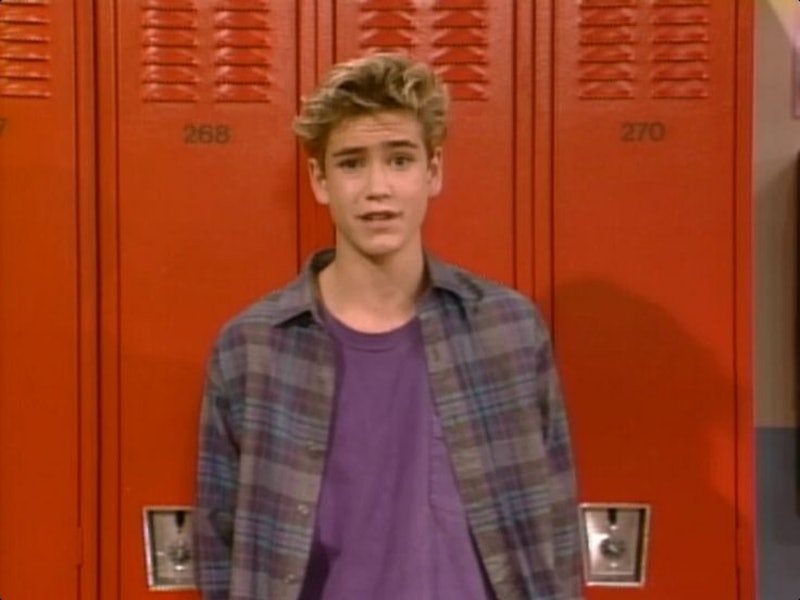 Growing up, Saved By The Bell was probably my favorite show on in the entire world, and that's saying something since the '90s was TV heaven. I loved everything about it, to the point where I even sat and wrote fan letters to the cast and displayed the carbon copy autographed postcards I got back from Tiffani Amber Thiessen and Elizabeth Berkley on my windowsill for years. Mark-Paul Gosselaar never got back to me, and I didn't forgive him for a long time. I have now, though, not only because it's been more than 20 years since the snub, but also because Gosselaar so kindly offered some behind-the-scenes facts during an appearance on The Tonight Show Starring Jimmy Fallon on Tuesday night.

Sure, Gosselaar has moved on to plenty of other TV and film projects since SBTB, but he knows what we want to talk about. We're nostalgic creatures and Zack Morris was likely our first childhood crush, and thankfully he's happy to indulge us. In addition to revealing that he's actually half-Indonesian (his mother is actually from the Southeast Asian country), Gosselaar schooled Fallon on how to pronounce his name in Dutch and then let us in on a few secrets about his Saved By The Bell days. Here's what we learned:

Gosselaar changed his look to incorporate a darker hair color years ago, but we all know him — and his infamous character Zack Morris — as a blond. Turns out, he dyed his hair blond every year just for the show. Can you imagine Zack as a brunette? That would've been interesting.

Zack Morris Had A Different Hairstyle Every Season For A Reason

If you think back, Zack's hair on Saved By The Bell was different from season to season. We all sported some different styles over the years, but on TV, characters generally aim for some amount of continuity. Gosselaar admitted that the cast and crew didn't worry about such trivial things, since they pretty much figured from year to year that the show was going to be cancelled. The fact that it wasn't was just a bonus!

Gosselaar Based His Portrayal Of Zack Off Ferris Bueller

Gosselaar joked during the interview that everyone thought he was super clever for having Zack speak to the camera directly on the show. However, it wasn't an original idea at all — he ripped it off from Ferris Bueller's Day Off. In fact, pretty much everything he did as Zack used Ferris Bueller as an inspiration, since it was Gosselaar's favorite movie at the time. Go figure!

Just when you thought you couldn't learn any more about Saved By The Bell, Mark-Paul Gosselaar goes and proves us wrong. God, I miss this show!

Watch a clip of Gosselaar's interview on The Tonight Show below: