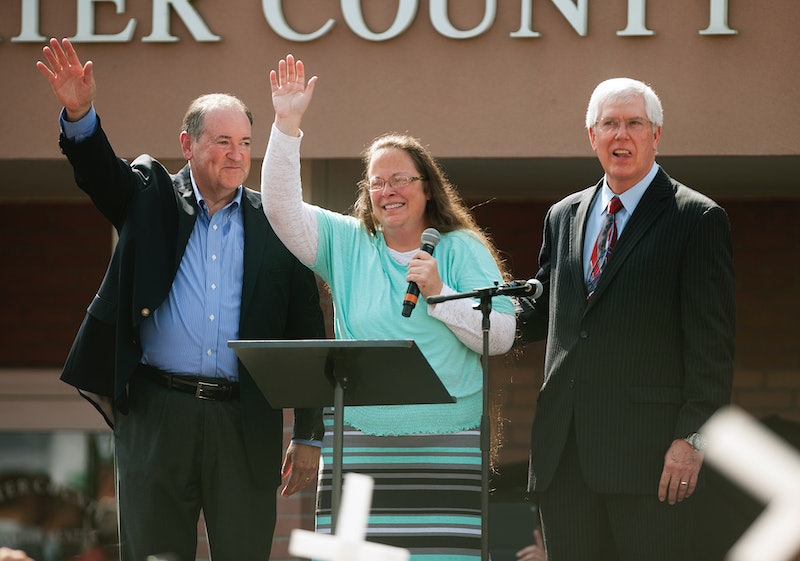 Kim Davis' lawyers release quite a long press announcement Wednesday claiming that the Kentucky clerk who was jailed for refusing to issue same-sex marriage licenses met with Pope Francis during his visit to the U.S., according to NPR. Davis reportedly told her legal team that the pope thanked her for "her courage" and told her to "stay strong," according to ABC News. Did Kim Davis actually meet the pope? It looks like it probably did happen.

Davis, who isn't a Catholic, told ABC News in an exclusive interview that a Church official called her a few weeks before the pope's visit to arrange a private meeting in Washington D.C. She said that she and her husband traveled to D.C. to meet with the pope on Sept. 24 at the Vatican Embassy. "I was crying. I had tears coming out of my eyes," Davis told ABC. She said that the pope spoke in English and that there wasn't an interpreter present, according to Mother Jones.

There was no word from the Vatican about the alleged meeting until Wednesday morning, when Father Benedettini from the Vatican Press office released a statement that would neither confirm or deny that the two had met, according to ABC News:

The Holy See is aware of the reports of Kim Davis meeting with the Holy Father. The Vatican does not confirm the meeting, nor does it deny the meeting. There will be no further information given.

But The New York Times reported that the Vatican spokesman, the Rev. Federico Lombardi, confirmed the meeting, but he declined to elaborate: "I do not deny that the meeting took place, but I have no other comments to add." Mathew D. Staver, on of Davis' attorneys, told the Times in a telephone interview that the pope's team sneaked Davis and her husband into the Vatican Embassy by car on Thursday afternoon, just before the pope flew to New York City. Staver said Francis gave Davis rosaries during their meeting, which he expects to receive photos of soon. Davis told ABC News that the meeting has greatly encouraged her in her plight of religious freedom by refusing to carry out her government-appointed position:

I put my hand out and he reached and he grabbed it, and I hugged him and he hugged me, and he said, "Thank you for your courage." He told me before he left, he said, "Stay strong." That was a great encouragement. Just knowing that the pope is on track with what we're doing, it kind of validates everything to have someone of that stature. ... I've weighed the cost and I'm prepared to do whatever it takes, even jail. It's still the same battle, we just have some more fighting with us now.

The pope championed the importance of religious freedom during a few of his speeches in the U.S., but he always balanced it with tolerance and said that it shouldn't be used as an excuse for discrimination. On his plane home, a reporter asked him about government officials who refused to perform their duties because of religious objections to same-sex marriage, according to the Times. Though the pope wouldn't speak about specific cases, he stated that "conscientious objection is a right that is a part of every human right":

The pope did not say whether someone should be allowed to retain her position if she refuses to perform government duties that she finds objectionable, and that seems to be the more important question for Davis' case.