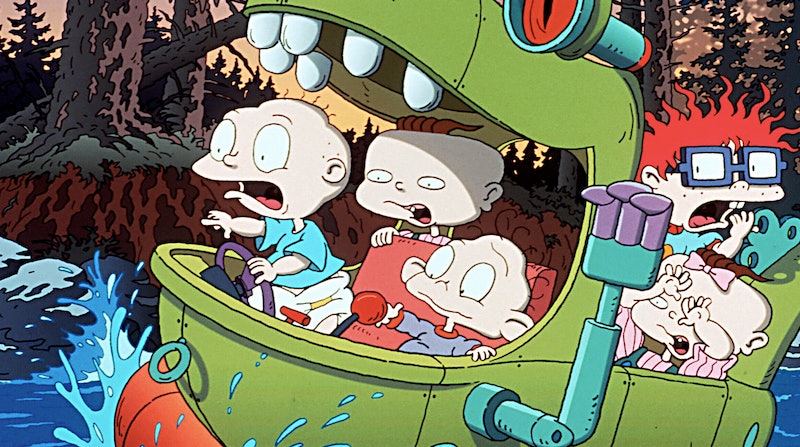 Almost 25 years after its debut, Rugrats is still an important show in the Nickelodeon canon. (In case you needed to be reminded of that fact, here are Rugrats episodes to re-watch ASAP.) The show ultimately produced 172 episodes over 9 seasons, showing us way more insight into the world of babies than we ever knew to be possible — and it was magnificent.

Rugrats gave us fearless leader Tommy Pickles, super-rational Chuckie Finster, partners in crime Phil and Lil DeVille, and the self-centered Angelica Pickles. (Shoutouts to supporting characters Spike, Reptar, and Cynthia.) Even though the babies' collective ages add up to less than 10, the Rugrats resonated with children of the '90s.

However, re-watching the Rugrats as an adult is an entirely different story. Not only can we now relate to the adult characters, but we also pick up on the show's more mature humor. But does it hold up? Absolutely. In fact, that's one of the signs that the show is so great — it withstands with test of time and a change in demographic.

In honor of the Splat, Nickelodeon's '90s revival channel coming in October, here are 17 things you notice when you watch Rugrats as an adult.

1. The Genius Of Angelica's Vanishing Cream

Except cooler because he was bright green.

Think about all the times the babies had to defeat corrupt toys. I'm looking at you, Mr. Friend.

Imagine if iPhones existed in 1992.

5. Alex Trebek Had A Cameo

It totally went over our heads.

Showing up to give the Finsters $10 million.

Grandpa Boris made a comment that totally went unnoticed by the young audience.

Seriously, did no one know the mischief they got into?

9. Babies Apparently Are Responsible For More Than We Acknowledge

So many episodes end in the Rugrats sneakily saving the day.

10. Tommy Pickles Has A Lot Of Screwdrivers

Where does an infant get this many screwdrivers?

Or formulate plans to break out of a maximum security daycare.

Even though they seemed so cool at the time.

Did you ever notice how many creepy adults there were on this show?

14. There Are A Ton Of Pop Culture References

15. The Early Episodes Were Kinda Creepy

Example: When Tommy got sick and started hallucinating.

16. Grandpa Had Some Questionable Tastes

17. We Can Still Relate To The Babies

Because they were the heart and soul of the show.

Here's to honoring one of the most iconic cartoons of the '90s.