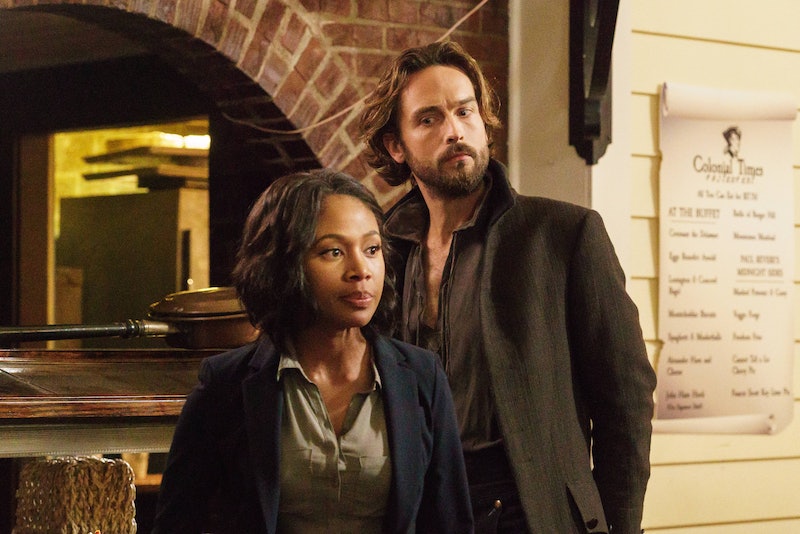 Can you believe that in just a few hours time we'll be diving headfirst (perhaps literally) into the Sleepy Hollow Season 3 premiere? We've seen the enticing trailers and eye-catching photos, but at long last we'll finally get to see our favorite two Witnesses reunite once more to stop the forces of evil from taking over the world. (So, you know, just a typical Thursday.) But unlike the end of Season 1, Season 2 didn't leave us with any large cliffhangers to obsess over for months on end. Instead, it wrapped things up in a nice, neat little bow, thus giving Season 3 a completely clean slate, which basically means anything can happen. But before we fully immerse ourselves in the latest installment of this wild and crazy adventure, I think it's important to refresh our memories of everything that's come to pass with a Sleepy Hollow Season 2 recap.

After all, last season forced us to say goodbye to some very beloved characters — as well as some not-so-beloved ones. (Looking at you, Katrina!) So while you might not need to recall every single detail that took place last year, there are a few things that are definitely worth remembering before Season 3 rears its headless… well, head. Such as…

The Introduction of Nick Hawley

Serving as both a treasure hunter and certifiable dreamboat, Hawley became an on-and-off member of Team Witnesses and helped the gang get their hands on/learn more about numerous artifacts in order to defeat Moloch. It was also revealed later on that he shared a romantic past with Jenny, though his occasional flirtation with Abbie made Ichabod jealous, thus helping to stoke the Ichabbie 'shipper flames. All-in-all, he turned out to be a pretty great recurring character. I wouldn't mind seeing the likes of him pop up throughout Season 3. Just saying!

Frank Irving Made A Deal With The Devil

After getting committed to the Tarrytown Psychiatric Hospital, Irving accidentally signed his soul over to Henry. However, this unfortunate turn of events actually ended up working in his favor. Since he no longer had a soul, Irving was able to wield the Sword of Methuselah and used it to take down Henry's Horseman of War creature, but not before said creature delivered a fatal blow to the former captain. That's right, folks — Irving died. Except just kidding! Thanks to the power of resurrection, he eventually came back as an Evil Irving for a while. But when Henry died, Frank's soul was returned safe and sound, giving us back the character we know and love.

Moloch Was Destroyed By An Unlikely Foe

It's no secret that Henry thought of Moloch as a substitute father figure. So when he realized that Moloch was willing to sacrifice him for the greater evil, he decided to turn the tables on faux-Daddy Dearest by slaying him with the sword in order to save Katrina's life. It's like the saying goes: blood runs thicker than evil alliances. (Or something along those lines.)

Just because he killed Moloch didn't mean Henry was done doing bad things. And, in the end, there was only one way to stop him: by killing him. Which was exactly what Abbie ended up doing. But while that may have ended one problem, it created a whole new one in Katrina. Furious at Ichabod for allowing this to happen, Katrina opened up a time portal, so she could go back to change the past and not save Ichabod from the Headless Horseman.

Ichabod Made A Life-Changing Decision

Thankfully, Abbie was sucked into Katrina's time portal as well and was able to transport both of them back to the modern-day world (thanks to 18th-century Ichabod and her witch ancestor, Grace) without permanently disrupting the past. But that didn't leave Katrina any less angry. In fact, she attempted to kill Abbie for ruining her life, which forced Ichabod to make a very tough decision. In order to save Abbie, he ended up killing Katrina. And while it was a shame to kill off a character who was only just now finally getting interesting, I am very much looking forward to seeing Ichabod living a bachelor lifestyle. (Call me?)