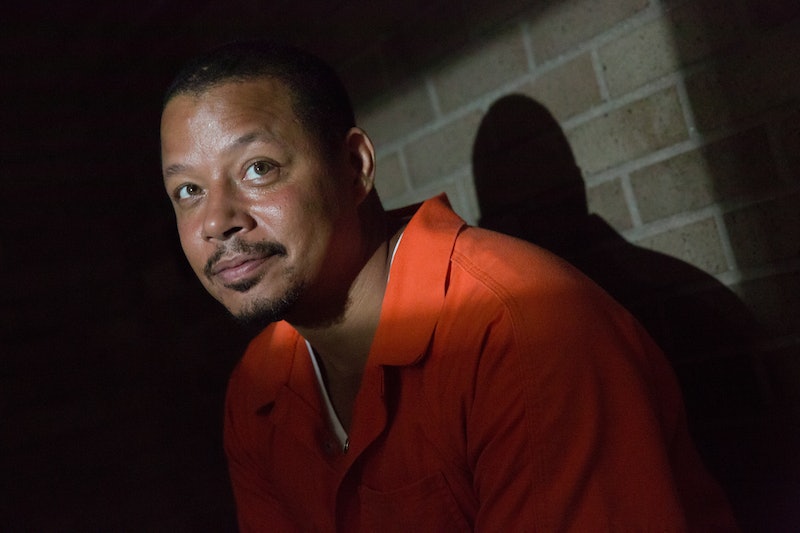 Is it just me or is anyone else getting fed up with how frequently Lucious Lyon gets his way on Empire? Sure, the guy was behind bars for a while, but now that Lucious has a new lawyer in Thirsty Rawlings, played by The Wire star Andre Royo, things are once again in his favor. And I'm just plain sick of it. For the first half of Wednesday night's episode, it seemed like Lucious was finally getting his just desserts for the terrible things he's done under the fake guise of his family and business. Let's all be really honest with ourselves right now: Everything Lucious has ever done was for himself. First, he was getting in serious trouble with Officer McKnight in prison, and then with the prosecutor of his case, Roxanne Ford. Ms. Ford used some dirty tricks like messing with Lucious' Myasthenia Gravis medication in order to get him to cooperate with her. But Thirsty turned the tables and used some dirty tricks of his own, so now Lucious is out on bail on Empire .

Thirsty first found a way to get Lucious his medication back (apparently the lawyer has a lot of friends in prison), then got him equipment to record a new track from prison. When the equipment was confiscated by McKnight, Thirsty sent goons after the cop to beat him up and get the track back to release it to the public. The final straw was when Thirsty used explicit photos to blackmail the judge into letting Lucious out on bail.

So now, for $1 million, Lucious is back out in the world to reconquer the Empire, all thanks to a lawyer he was lucky enough to randomly meet. And I don't think that's where Lucious' luck will end. I believe Thirsty will actually get the whole case thrown out, since the prosecution has lost their star witness, Vernon.

Once Lucious returns to Empire, he'll be able to pull the strings through Jamal, forming his middle son more and more in his own image. However, there is hope that Roxanne will find a way to uncover other illegal secrets Lucious has been hiding. We may actually see Empire begin to falter now that Roxanne is out for blood and Cookie is on her own, making a rival record label with Hakeem.

It's about time for the age of the women to begin on Empire, with Roxanne and Cookie hitting Lucious hard on either side. But considering how well things have been going for Lucious (the guy only spent three months in jail and had Frank Gathers killed during that time!), it's also extremely likely that he'll find a way to land on his feet and rise above everything that's starting to crumble around him. Still, it's always possible that his luck has run out. Maybe in Season 2, those around Lucious will slowly but surely start taking his power and his Empire away from him. That's something even a lawyer as cunning as Thirsty can't fix.

Forgot what happened last season on Empire? Check out the Season 1 drunk recap video below.

More like this
Gabourey Sidibe Wore A Traditional West African Wedding Dress On The Cover Of Brides
By Dominique Norman
When Was 'Bling Empire' Season 2 Filmed?
By Alyssa Lapid
Cherie & Jessey's Relationship Timeline Is As Complicated As It Seems On 'Bling Empire'
By Brad Witter
What To Know About Bling Empire Newcomer Leah Qin
By Kadin Burnett
Get Even More From Bustle — Sign Up For The Newsletter