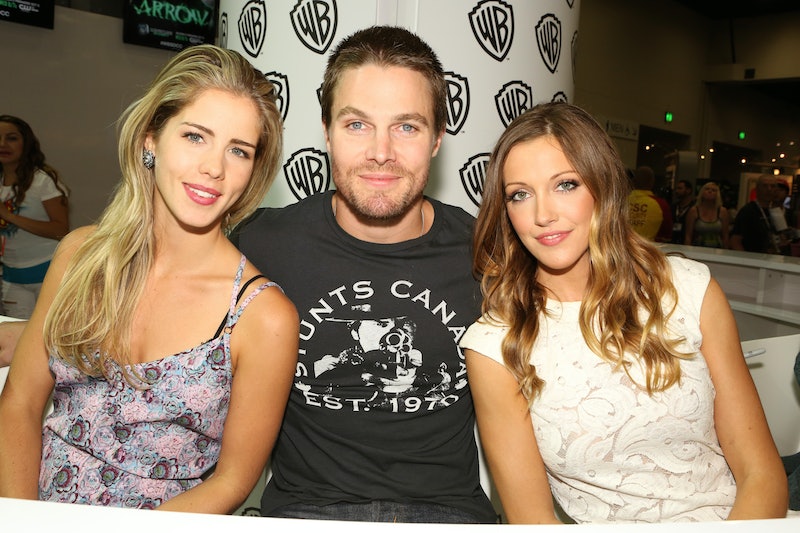 I don't know about the rest of you Arrow fans, but I am real impatient. Thankfully, the Arrow rSeason 4 premiere is heading our way on Wednesday, Oct. 7, to sate our unending hunger for justice… and romance. 'Sup, Olicity? How you doin’? To be fair, CW has done what they could. We got a seriously bad ass trailer, and a few other revealing clips, in an attempt to quell our voracity for content, but they can’t exactly make the days come faster. Though, that’d be pretty cool if they could. Cause then I'd jump to the finale and... never mind. At least we have a lot of behind-the-scenes Arrow photos to keep us company as we wait.

During the hiatus between seasons, we have the cast both trolling and treating us to some seriously thought provoking behind the scenes pictures, both in and out of costume. Just imagine what we would have done if social media wasn’t around for quick fixes like this? Though the cast does a fairly good job of keeping the fans updated throughout filming with little pieces of insight via pictures and cryptic, show-related tweets, it seems that, in the last week or so, we’ve gotten even more than we deserve. Don’t get me wrong; I’m not complaining. Just simply appreciative of our good fortune. And I think it has a lot to do with their excitement over the Season 4 premiere, too.

Here are some behind the scenes pictures to get you in gear for the Arrow premiere.

I won't assume what it's for. Because you know what happens when you assume. On the Internet. In print. Anyway, asking for a friend... How does one get invited to such a party? Side note: Are there bullet proof vests offered at the door?

Even The Black Canary And Speedy Are Foregoing The Leather Suits

Uh, guys, if Star City's crimefighters are all at one event... who's protecting the city?

Central City Is In Town (Or, Vice Versa)

Barry and Caitlin and Oliver and Felicity and Laurel, oh my!

The Masked Heroes (Sans Green Arrow) Are In The Zone

I wouldn't step to them. I really wouldn't.

The Unmasked Heroes Are... More Apprehensive

Apprehension is good. Fear is good. It's smart. Though, what they look like they're about to do doesn't seem like the best course of action.

Last But Certainly Not Least, We Got A Fab Collage Of The Team In The New Lair

Ooooooh! Sure, it's just a little glimpse, but I can say that things look upgraded and green.

You know, Arrow cast, if you want to post some more pictures in the upcoming week... feel free.