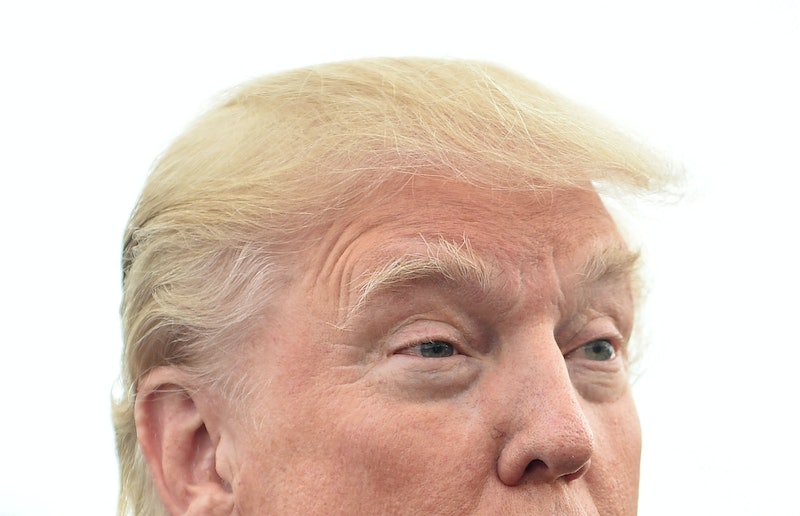 The internet is an horribly amazing place and its users are equal parts horrible and amazing. Donald Trump decided to throw shade at Florida Sen. Marco Rubio on Twitter this morning when he tweeted, "I watched lightweight Senator Marco Rubio, who is all talk and no action, defend his WEAK position on illegal immigration. Pathetic!" Trump, who is the king of offensive attacks on people's character rather than their arguments, got a brilliant taste of his own medicine when one Twitter user tweeted a fake photo of Trump with a man bun. The well-edited photo is hilarious, interesting, and horrifying. Like the American Idol auditions, it's so bad that you can't tear your eyes away.

Trump is still the leader among the 2016 Republican presidential candidates, according to USA Today/Suffolk University Poll released Wednesday. Of course Trump was quick to tweet the new poll and brag about the "great news" out of the "highly respected" USA Today poll. Following Trump on Twitter can be exhausting, because all he does is tweet out personal attacks, brag about the size of the crowds who apparently come to see him speak, and hate on polls that say his support has been declining recently. Some of his followers, like Drew, just can't take it sometimes. Drew responded to Trump's Rubio remark with the man bun photo, which will change your perception of Trump forever.

It's almost difficult to decide how I feel about it. It's scary, but mesmerizing; repulsive, but enticing. Then I imagine him yelling "Make America great again!" in front of a podium while it shakes vigorously and I just lose it. The responses to Trump's man bun are almost greater than the man bun itself. Almost.

Though GQ's Chris Gayomali pointed out that it's probably physically impossible for Trump to rock a man bun, it's still amazing to see the possibility. In Gayomali's words, Trump "sorta like a shrunken yet adorable Polish grandmother," and that's probably why the photo is slightly endearing, but in a way that makes you giggle and then want to wash your own hair.

Trump never responded to the tweet and instead continued in regular Trump fashion by issuing more attacks against Rubio and, most recently, against Forbes magazine, which estimated Trump's worth at $4.5 billion — less than half of Trump's claim that he's worth more than $10 billion, according to CNBC News. Trump said Forbes doesn't "give you any value for brand, and my brand is very valuable." *Twirls man bun*

Thank you, internet, for adding to Trump's brand in a way that will haunt people in their sleep.