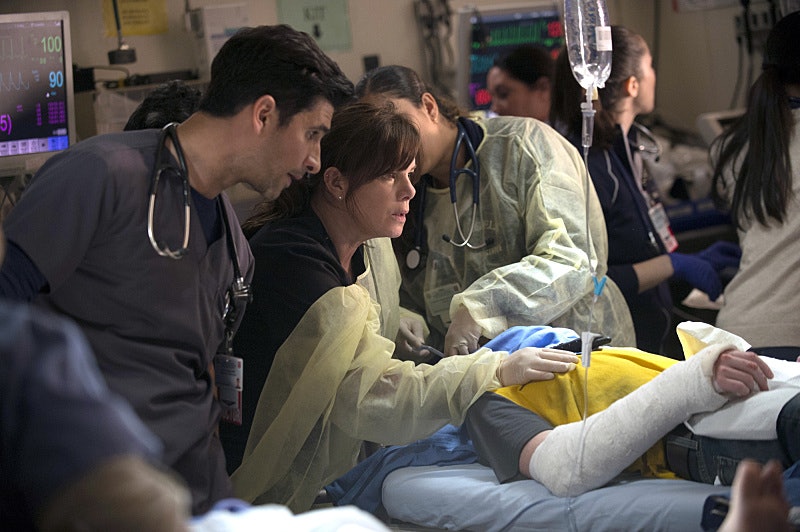 In the new CBS drama Code Black , the titular phrase refers to "when there are more patients than resources [in the Emergency Room]." However, it seems that there this may only be true for the television series. Other hospitals, real and fictional, have different definitions for what "Code Black" means. The show's term comes from how it was used at Los Angeles County Hospital, where the documentary that inspired Code Black was shot. "Code Black" may mean overcrowded and understaffed at the emergency room of Los Angeles County, but what does it mean for other hospitals around the world?

According to Melissa Conrad Stöppler, MD, there is no formal definition for "Codes" that carry over throughout hospitals. While many hospitals use the term "Code Blue" to say a patient is suffering cardiac arrest, that may not be true for every hospital as it is up to the specific hospital to determine what codes mean to that institution. "Code Black" is one of many color codes that hospitals use, and while there is not a specific definition for it amongst hospitals, it almost always refers to a die emergency.

Here are a few different meanings for "Code Black" in other hospitals around the world.

The idea of the phrase "Code Black" being used in a television hospital isn't new to Code Black, as Grey's Anatomy had to deal with one in its second season. However, the "Code Black" in Grey's Anatomy didn't refer to having too many patients in the emergency room, but instead alerted the building that there was a bomb in the Seattle Grace Hospital. Many real hospitals use "Code Black" to mean "Bomb Threat" as well, including any hospital following the Ontario Hospital Association's color codes.

In Australia, many hospitals follow a color categorized code in which a "Code Black" is a "Personal Threat to others or self." While the specifics of the code are left up to the doctors, it seems to be any threat to the hospital or someone within it that is caused by another person. In addition to "Personal Threat," Australia has a more specific designation called "Code Black Alpha," which is used in case there is a child or infant abduction.

Most hospitals reserve the term "code black" for a bomb threat according to John Patrick of Harvard Medical School, but it makes sense that the emergency room of Angel's Memorial in Code Black would refer to the overpopulation of the ward as a "Code Black." No matter what the hospital, that threat level is reserved for a situation where the worst-case scenario has become exactly what is occurring within the hospital, and for Angel's Memorial (and Los Angeles County) an understaffed, overcrowded ER is just that.