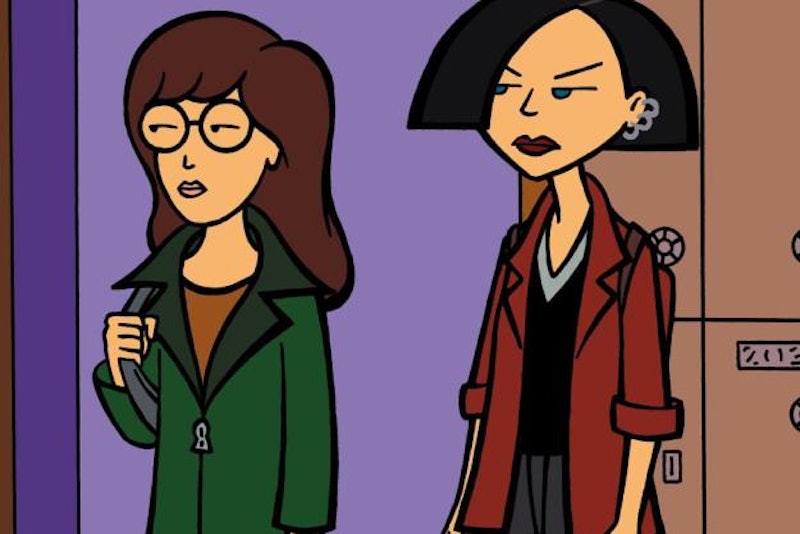 When I applied to colleges during my senior year of high school, I was flummoxed by having to list my extracurricular activities. I wasn’t into sports, theatre, or student council, and I’d never been interested in the debate team or cheerleading. My main after-school activites consisted of writing terrible poetry, decorating my walls with homemade art, and lamenting the fact that NO ONE UNDERSTANDS ME. Why wasn’t there a space for “expressing my deep existential angst” on my college applications?

I was the type of angsty teenager who wanted to rage against the machine, but without actually doing anything dangerous or even rebellious. I didn’t smoke, skip school, or really even fight with my parents — I just hid out in my room with a sketchbook and thought Very. Deep. Thoughts. Luckily, the '90s were on my side: The decade produced a plethora of films and albums that perfectly expressed the disillusionment and alienation of growing up, and between Jagged Little Pill and Reality Bites, I was all set.

There were lots of people who had totally good reasons for being angsty in the '90s (like Nancy Kerrigan, Buffy the Vampire Slayer, and all of the people who had to live with Puck in The Real World: San Francisco), but I had no real cause to be as frustrated and moody as I was, beyond the fact that I was growing up, and growing up is hard. And I think that, silly as they may seem now, those feelings are valid. As adults, it’s easy to look back and make fun of our own overdramatic, teenaged existential crises, but being a teenager is difficult, no matter when you grew up: It’s painful and confusing to figure out who you are, how to become an adult, and how to cope with the realization that your parents are imperfect and human, all amid a flood of hormones. Is it any wonder that we all spent 1995 wailing “Wonderwall” in the car on the way to school?

So thanks, '90s, for giving me so many outlets for expressing what was in my angsty little teenaged heart, in ways that didn’t get me sent to the principal’s office or prison:

I mean, I don’t know if your poetry was awful. Maybe it was great. I know that my poetry was awful, but I wrote a lot of it, because I had Very. Intense. Feelings. Hey, there are worse ways to express teenage dissatisfaction than through overwrought metaphors and cringe-worthy clichés, right?

Listening to Alanis Morissette, Oasis, and Garbage on endless repeat. (Except when you had to manually change the CDs, because that was a thing we had to do back then).

Everyone had their favorite angsty jams in the '90s (Remember “The Freshmen” by The Verve Pipe? Everyone between the ages of 12 and 17 was obsessed with that song for about two weeks in 1997), but Alanis, Oasis, and Garbage were the trio that ruled my life in middle school and high school (The '90s really did have the best angsty music, didn’t it?). Back then I wanted to be Shirley Manson. (To be honest, I still want to be Shirley Manson. Doesn't everybody?)

In high school, your favorite movies were Empire Records, Reality Bites, and Clueless (because even amidst your existential torment, you could recognize that Cher Horowitz is one of the greatest cinematic creations of our time.) You also felt a deep soul bond with Kat Stratford in 10 Things I Hate About You because she is misunderstood and an unapologetic feminist. (But also because you were completely in love with Heath Ledger, to the point that maybe you had a giant poster of his face on your bedroom door.)

Making collages to decorate your walls.

Spending a lot of time at the new coffee shop with your best friend while having conversations about LIFE.

Fancy coffee (cappuccinos, lattes, etc) was a relatively new thing back then (the Pumpkin Spice Latte was nary a glimmer in Starbucks’ eye at that point). You didn’t even like coffee, but you liked the coffee house vibe and the shop’s rotating soundtrack of musicians like Tracy Chapman and Mazzy Star.

The theatres in your hometown didn’t show a lot in the way of art house cinema, but whenever anything remotely indie, foreign, or weird could be had, you were there. Being John Malkovich completely blew your mind.

Using the Internet — so new, so shiny! — to be antisocial.

Kids nowadays can have their heads buried in social media from birth, but back in ye olde '90s, kids were exploring for the first time how the Information Super-Highway could be used to find like minded people and to ignore their parents. It was fantastic — at least until you got kicked off because your mom needed to used the phone.

In your mind, you were Daria. Everyone else in the world was basically Quinn. You watched the show incessantly (to the extent that it was possible in the days before Netflix streaming) and felt that Daria’s monotone malaise spoke to a deep part of your soul.

You were so into the show that at your first concert (Third Eye Blind, natch), you wore a black t-shirt and jeans because you were complicated and DARK. It was only when you got there that a friend pointed out that you were exactly copying what Daria wears when she goes to a concert:

Or, uh, maybe that was just me? Way to separate yourself from the herd, former self.