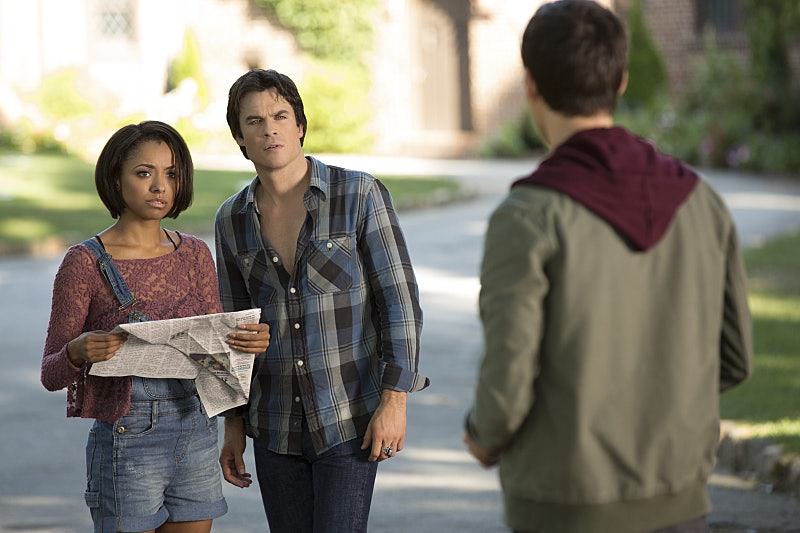 Oh, Bonnie Bennett your life is about to get a heck of a lot more complicated. The Vampire Diaries Season 6 saw Kai putting Elena under a spell that keeps her a real-life sleeping beauty for as long as Bonnie lives. So, not only does Bonnie not have her best friend around anymore, but she is the sole reason Damon is without Elena. I'm guessing that's going to lead to a lot of guilt and anger. But, maybe, just maybe, it might also be the start of the long-hinted at Bonnie and Damon relationship on The Vampire Diaries. It wouldn't be the most outlandish thing to happen in Mystic Falls in the last few years, and the hints have been there since they were exiled to the past together. (We all remember their pseudo-sexual welcome home jump hug, yes?) It's never been a question of chemistry, it just didn't make sense for them to get together with Elena in the picture.

Now, however, Elena is gone, and it looks like Season 7 will bring a Damon and Bonnie romance. (Or Bamon, as the 'shippers call them.) The details are still pretty scarce (filming hasn’t even begun yet), but all signs point to friendship and romance mixing for these two characters.

One tidbit we have to go off is the word of Bonnie herself. Actress Kat Graham spoke about Bonnie and Damon's future to E! News, and, when asked if Elena's absence would bring them together or tear them apart, she had this to say, "I'm hoping that we see both sides of their relationship and how it can affect them both because it's obviously going to screw with Bonnie and him, but especially Bonnie."

Both sides you say? A little push me, pull you action? I could see them doing that quite well. In an even more telling interview, The Vampire Diaries executive producer Caroline Dries commented on the Season 7 Bonnie/Damon dynamic to The Hollywood Reporter:

We thought we could play Bonnie feeling guilty and sad, feeling terrible this happened, or we could let her be empowered by Elena's words to her, and say, "You know what? This is the life Elena gave to me. She's letting me live, and I'm going to be a badass." So we're going to let Bonnie continue to be the badass self she's evolved into this season. She'll have a closeness with Damon. They're going to remain friends, but he's going to rub off on her a bit. It'll be fun to watch them together.

I, for one, am so ready to see Bonnie coming into her own even more so next season. Plus, if she's spending more time with Damon, even if it starts as just friends, how could that not lead to romance? After all, Elena did tell him to go out there and live his life. This seems like a juicy way to do just that.