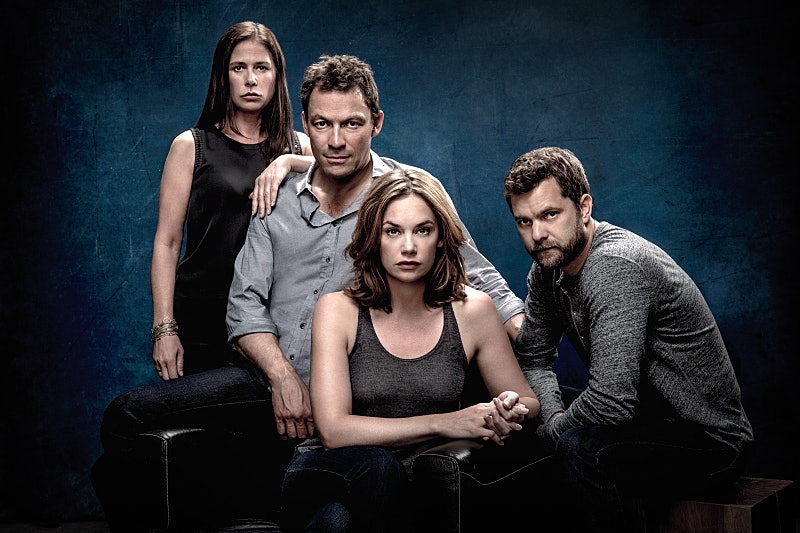 It's been nearly a year since The Affair Season 1 finale, and I could not be more ready for this psychological, mysterious drama to begin owning my Sunday nights again. Although the narrative devices of alternating perspectives and flash forwards have become increasingly popular on TV, The Affair's handling of two different points of view is hands-down my favorite. By showing the exact same events from both Noah and Alison's perspectives, the show raises many thought-provoking questions about how reliable our own memories are, and why we may subconsciously choose to recall events in a certain way. And these question became increasingly important to the plot as the season went on and we learned Noah was being investigated for murder.

Despite the show's deliberately slow pace, a whole lot happened over the course of the season's 10 episodes. Although the most memorable moment of the season arguably occurred as Noah was arrested, there was also a sketchy drug dealing ring, a teen pregnancy, and some angry gun-waving courtesy of a super angry jilted spouse.

It's been far too long since Noah, Alison, and company graced our small screens — but luckily I marathoned Season 1 of The Affair over the summer, and here's a recap for anyone who's forgotten the details.

The opening credits set the tone perfectly, mainly because Fiona Apple sings the eerie theme song, "Container." Executive Producer Sarah Treem is a huge fan of Apple and the song was written specifically to accompany The Affair's main storylines about an extramarital affair and a mysterious death, according to Rolling Stone.

Noah, his wife Helen, and their four kids are in Montauk for the summer staying with Helen's seriously pretentious parents in their massive home. When they arrive, they stop at a diner for lunch and Noah has a chance encounter with Alison. She saves his youngest daughter from choking, and the two quickly become infatuated with each other. They're both married and initially don't do anything beyond a whole lot of flirting and kissing, but in Episode 4 they leave Montauk and head to Block Island together to officially begin their torrid affair (in a hotel room, of course).

Alison Is Mourning The Loss Of Her Son

Alison and her husband, Cole, had a four-year-old son who died two years before she meets Noah. She visits his grave to read to him from Peter Pan, self-harms as a coping mechanism, and absolutely hates the fact that Cole has a tattoo commemorating their son because it's the first thing she sees every morning. He died from secondary drowning, hours after ingesting ocean water. Alison initially seems to solely blame herself for failing to bring him to the hospital even though he seemed fine — but she eventually begins to blame Cole as well, because she wasn't even on the beach when the incident occurred.

Noah & Alison Break Up, Then Go Back To Their Spouses

Noah and Alison end their relationship when he learns that she, Cole, and her brothers-in-law have a drug dealing gig, and he returns to Brooklyn with his family. Noah grapples with extreme guilt and eventually suffers a panic attack that lands him in the hospital, where he confesses his affair to Helen. Meanwhile, Cole also learns that Alison cheated on him — but from a third party rather than his wife herself. They both make somewhat half-hearted attempts to fix their marriages, but it predictably doesn't work out.

In Present Day, Noah & Alison Are Both Being Interrogated

Throughout the season, Noah and Alison's memories of their relationship are interspersed with scenes of them being interrogated separately by Detective Jeffries about a hit and run. We eventually learn the victim is Alison's brother-in-law, Scotty, and it becomes increasingly apparent that Noah knows way more than he's letting on — and Jeffries has it out for him. Alison looks a little sketchy herself during some of these scenes — at one point she's shown outside on the phone nervously telling someone that she's being interrogated, and it's left deliberately unclear who she's actually speaking to.

But, the nail in the coffin is when Noah pays a hefty sum to the mechanic who fixed his car in exchange for his silence. This would have been a solid plan if the mechanic hadn't been wearing a wire that he promptly turns over to Jeffries, who couldn't be happier to finally have some solid against Noah. But why would Noah have motive to kill Scotty? That leads us to...

While Noah is sneaking around with Alison all summer, his daughter Whitney is having a secret tryst of her own with Scotty. Back home in Brooklyn, she realizes she's pregnant and tells Noah and Helen that she's scheduled an abortion — but refuses to say who the baby's father is. On the day of the abortion, Noah shows up to find out, and promptly attacks Scotty the moment he lays eyes on him. Unfortunately for Noah, it's all captured on video and eventually winds up in the hands of Jeffries. So, yeah, things aren't looking good for Noah.

Cole Pulls A Gun On Noah & Then Himself

After a fairly slow-moving season, the finale was pretty action-packed. Noah, who is at the moment back together with Helen, gets an urgent text from Alison that Whitney is in Montauk. Noah and Helen go to pick her up, and predictably all hell breaks loose. Noah attacks Scotty (again) and Cole pulls a gun on him as he vents his rage that Alison is the only thing in the world he still cares about and Noah stole her. He also turns the gun on himself and repeatedly threatens suicide. Pacey (uh, Joshua Jackson) is seriously impressive in this scene, and I can't wait for him to have more screentime in Season 2. Whitney is understandably traumatized and Helen gets her out of the house STAT, but Noah stays behind to comfort Alison instead (which is some seriously bad parenting, if you ask me).

Noah Is Arrested For Scotty's Murder

We're finally in present day and not in an interrogation room. Noah and Alison are living together in New York City with their baby and, for about 60 seconds, all appears to be well. Then Detective Jeffries comes knocking and arrests Noah for Scotty Lockhart's murder. As Noah is taken away, Alison promises to get him out of this and asks him if he trusts her — and he doesn't respond, which doesn't really bode well for their relationship.

Did Noah really kill Scotty or is he covering for someone? Can Alison actually be trusted? Season 2 will include the perspectives of Helen and Cole — and will hopefully answer all our remaining questions about what really happened to Scotty and why.