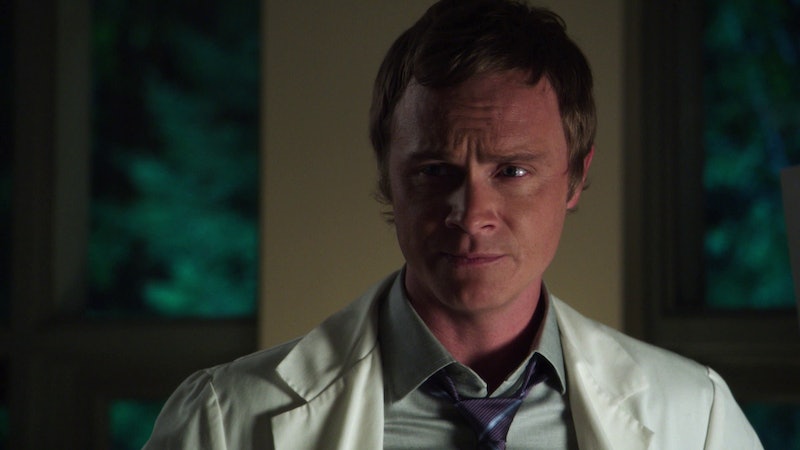 If you tuned in last Sunday night for the premiere of Once Upon A Time Season 5, you know that the stakes in Storybrooke and Camelot alike are pretty high. While Emma worked hard to resist the darkness that threatened to overtake her, we do know that she eventually gives into it — how and why are another issue altogether, given that the new Dark One has cast a curse to take away everyone's memory and transport them out of the Enchanted Forest and right back in Maine where they started. For now, the Dark Swan has left us with an ominous warning: a big problem is heading to Storybrooke, and without the old Emma there to save everyone, things could get pretty hairy. I guess, then, that it's no surprise that we should have a doctor on hand, and that's where David Anders come in: Dr. Whale is coming back to Once Upon A Time , and it seems like it's happening just in time.

It's been a while since we've seen Dr. Whale — his last appearance was in the Season 3 episode "Kansas," when he delivered Snow and Charming's baby, Neal — and, like the other minor characters who've gone missing for extended periods of time, we were never really given an explanation for his absence. What we do know, thanks to a Twitter Q&A Anders participated in this week, is that the doctor will be back in Storybrooke General Hospital sometime soon, and that makes me think someone could be in serious trouble.

Anders' return follows that of Meghan Ory as Ruby and Jamie Chung as Mulan, and ,like his fellow actresses, we still don't know when this return will happen. If you follow the Once production information that pops up online, you'll know that they're already filming the ninth episode of the season, and, given that 5A will only have 11 episodes before the mid-season hiatus, it could be that Whale won't be needed until the spring. Of course, given that the mid-season finale will likely be explosive, he might pop up before then — we'll just have to wait and see.

It'll be great to see familiar faces from Once's earlier seasons pop back up, and it's also exciting to think that Emma's run of darkness will be so explosive that the possibility of people ending up in the hospital is not only very real, but also incredibly likely. Despite the fact that I've always been a bit skeptical of Whale's motivations, I suppose we have to trust his life-saving abilities (Regina will have written that into her curse, of course), and keep our fingers crossed that everything turns out OK.