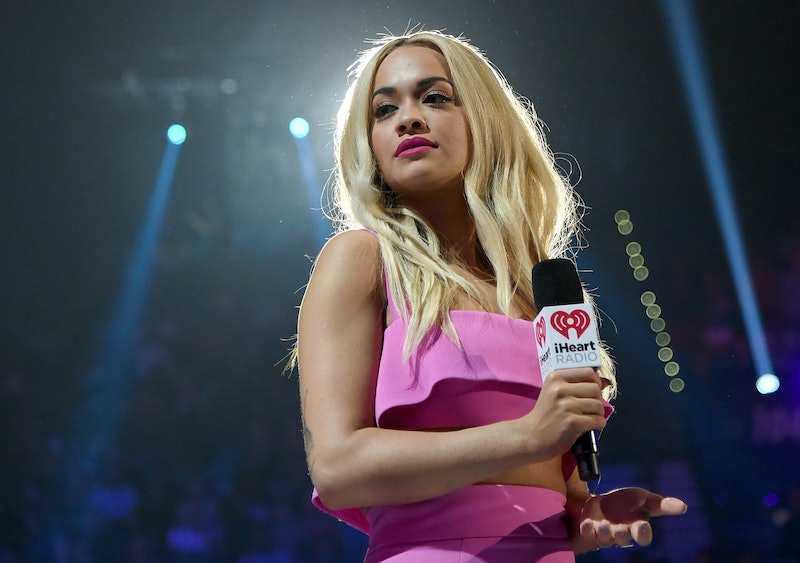 Love and basketball? That's the word on the street about Rita Ora after she met a certain rock star at a basketball game last month. The "I Will Never Let You Down" singer has been linked to many people as of late, including rapper Wiz Khalifa and former One Direction member Zayn Malik. But if the latest rumors about the pop star's romantic life are true, Rita Ora and Travis Barker may be dating.

According to Us Weekly, Ora supposedly hit it off right away with the Blink-182 drummer after meeting him at the Power 106 All-Star Game in Los Angeles on Sept. 20. An Us Weekly source said the 24-year-old was the one who initiated the romance: "Rita sought him out and gave him her info. They have been together every day since." And apparently, 39-year-old Barker is digging it and is "really into her."

Well, if what the insider says is true, talk about a whirlwind romance! Reportedly, Ora and Barker only just met less than two weeks ago. And to be honest, at first glance, they may seem to be a bit of an odd couple to say the least. But there are a few reasons why the two may actually make a pretty good match. Read on to see why they could actually be a good pair.

They're Both Passionate About Music

According to the Us Weekly source, the pair has been bonding a lot over music. Well, it is no secret that both care quite a bit about music since they made careers out of it. So, if they are in fact able to share more about their inspiration and their work with one another, that could make for some really rich conversations, leading on to the next point.

They Have Much To Learn About Each Other's Tunes

Even though they both care deeply about music, they come from very different sides of the spectrum. With Ora's mezzo soprano vocals and Barker's superstar drum skills, they have the chance to learn something new about their respective industries. Plus, I can't even imagine what a collaboration between the two would sound like, so naturally that means I — and I'm sure many others — want to hear it.

They Both Had Film & TV Ventures

Music is not the only thing they do for a living! Ora is also interested in acting and has appeared in television series and movies, most recently Fifty Shades of Grey (even though she was on screen for about two seconds). She has also collaborated with fashion brands. Meanwhile, Barker has also appeared in a variety of films and TV shows. He has also appeared in video games as a character. More material for further conversations!

They Both Have Striking Fashion Sense

Between Barker's never-ending sleeves of tattoos and piercings and Ora's platinum blonde hair (which she recently cut!) and fearless plunging necklines, both of them undoubtedly turn heads wherever they go. Just imagine what they would do on a red carpet. They would probably snap necks!

Barker and Ora have yet to officially comment on whether they are together, but if they are, it will be interesting to see where this goes.

More like this
Kourtney & Travis Crashed His Daughter’s TikTok Live In Their 2nd Wedding Outfits
By Grace Wehniainen
Scott Disick’s First Time Around Kravis Was “Awkward,” To Say The Least
By Jake Viswanath
Kourtney Kardashian Broke Her Engagement Ring & Cried In Her Closet For Hours
By Jake Viswanath
Avril Lavigne Never Let Go Of Pop-Punk
By Samantha Leach
Get Even More From Bustle — Sign Up For The Newsletter