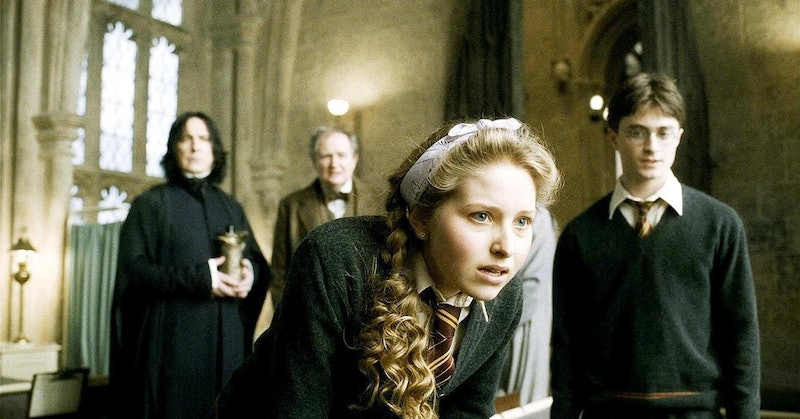 Holy conspiracy theory, Batman, did Harry Potter fans just hit a fandom goldmine? The most vigilant among us noticed that Pottermore removed information about Lavender Brown's death, which means she might not be as gone as we thought she was. The rational part of me knows that there is probably no chance she survived after the incredibly somber moment in the movie that Professor Trelawney and Parvati Patil pull the sheet over a dead body presumed to be Lavender's — and if that wasn't enough of a moment killer, there's also the fact that a guide to the making of the movie cites her as dead as of May 2, 1998, the day of the Battle of Hogwarts. But here's the thing — did J.K. Rowling ever confirm the death herself?

When you reexamine Lavender's involvement in the Battle of Hogwarts, all we see of her is that Hermione and Professor Trelawney rescue her from Fenrir Greyback after she is injured from falling off of a balcony. She is described as not fully conscious, but more importantly, never described as dead. The book never revisits her after this, and though many side character's deaths were confirmed during the battle and in the aftermath, hers never was put into written text.

Which brings us to the recent theory that has rippled through the fandom: Lavender Brown might be alive, and Pottermore might be all the proof we need. Earlier Pottermore's fact sheet on Lavender said she was a Gryffindor, and gave her date of death:

If the word "presumed" wasn't enough to send us all into a flurry, then the complete removal of any mention of her death certainly was. This is what Lavender's page looks like today:

GASP. SHOCK. Could it be that J.K. Rowling is bringing one of our faves back from the presumed dead?

If anyone is deserving of a dramatic reentry back into the wizarding limelight, it's Lavender. She certainly knows how to make an entrance, and she is tenacious, gutsy, and passionate to boot. As much flack as she got in the fandom for messing with our Ron x Hermione feels, in the real world we all deserve a BFF like Lavender Brown. So pretty please, J.K., let this be our one little miracle!

Even if she doesn't, in my head she met up with Dean Thomas after the Battle of Hogwarts, opened her own tea/tea leaf reading shop in Diagon Alley, has season passes to watch Ginny slay at Quidditch, and grows old with her BFF Parvati and their collective seven kids and 18 grandchildren. THE END.

More like this
The 'Hocus Pocus' Sequel Finally Has A Release Date & It Makes Total Sense
By Shannon Barbour and Radhika Menon
At 14, Jenny Han Wrote Rom-Coms About Her Friends & Fan Mail To Leo DiCaprio
By Alyssa Lapid
Lauren Rae Is Bringing Back The Sex And The City Vibes In Her New Memoir
By Shahed Ezaydi
S Club 7’s Jon Lee Continues To Reach For The Stars
By Rachel Mantock
Get Even More From Bustle — Sign Up For The Newsletter