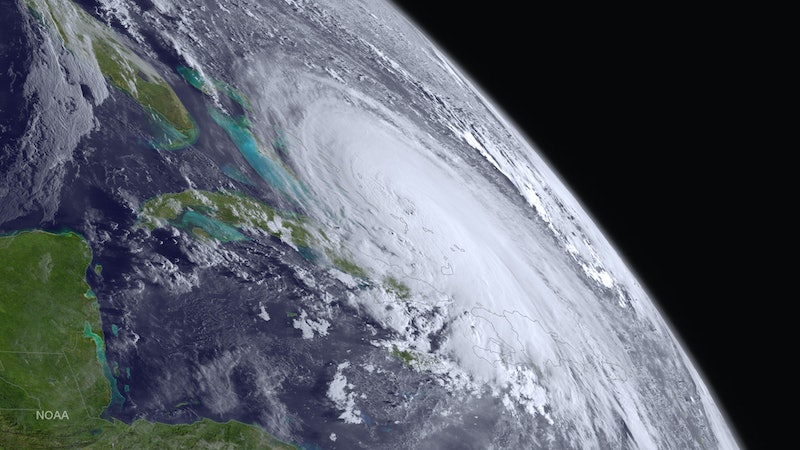 Hurricane Joaquin is heading for the Bahamas, and it could hit the U.S. east coast by the end of the week, too. But what category storm is Hurricane Joaquin? Forecasters upgraded the hurricane to a Category 3 storm earlier this morning, according to the U.S. National Hurricane Center, a division of the National Oceanic and Atmospheric Administration (NOAA). Category 3 storms can incur "devastating damage" to homes in their path, the Center explains on its website. Some of that damage may include tearing roof decks off homes, uprooting trees, and causing electricity and water to become unavailable for weeks. (Update: Hurricane Joaquin strengthened to a Category 4 hurricane on Thursday afternoon.)

The storm is expected to hit the Bahamas on Thursday night, though, and it could affect more than 10,000 people in its path. People in the northwestern Bahamas could be hit with hurricane winds and heavy rain, as well as "dangerous storm surges," CNN reports. Cuba and the southern Bahamas, meanwhile, received rain on Wednesday evening, courtesy of Joaquin. The central and northwestern Bahamas remain in a hurricane warning.

While experts are still unsure whether Hurricane Joaquin will hit the United States, many East Coast states are preparing for the worst. Virginia, for example, is still under a state of emergency, after the state's governor, Terry McAuliffe, declared a state of emergency on Wednesday evening. Heavy rains hit Virginia on Tuesday — the National Weather Service's Blacksburg office reported that the area received 4.39 inches of rain, making Tuesday the city's wettest day on record.

Forecasters believe Hurricane Joaquin will head north after hitting the Bahamas, but it's still difficult to predict exactly where the storm will impact the United States, if it does make landfall in America. "Anywhere from South Carolina all the way up to the Northeast needs to be on the lookout for this storm," Jennifer Gray, a CNN meteorologist, said in a statement. "There's still a lot of uncertainty with this storm." It's possible that the storm will head east into the ocean, but even if the storm doesn't make landfall, it could still cause heavy rains on the east coast in the next few days.