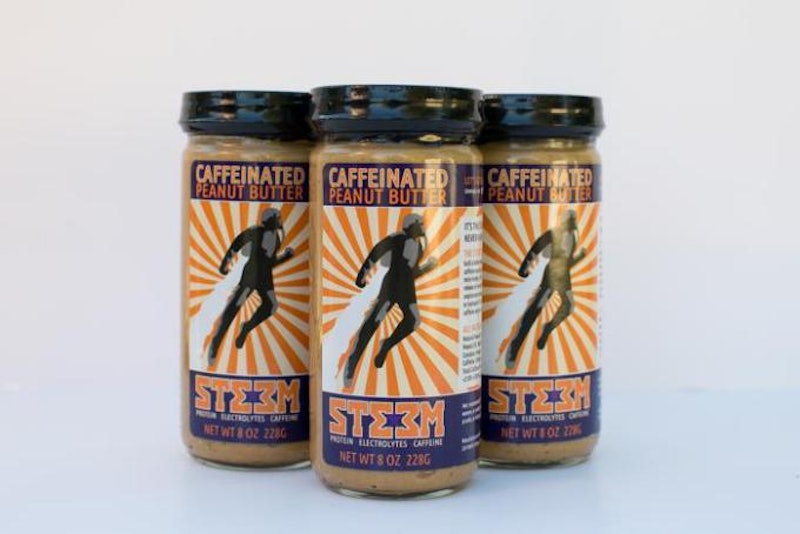 I always find that if I don't get enough sleep the night before, lunchtime is when I start to feel the effects of sleep deprivation the most. If you're in the same boat as me, we can now satisfy our need for caffeine without downing an extra cup or two of coffee. Steem has created caffeinated peanut butter, which allows you to eat your midday boost instead of drinking it. The new peanut butter, manufactured in Massachusetts, is sure to pack a punch, since just two tablespoons of the product have the same amount of caffeine as two cups of coffee.

Steem co-founder Chris Pettazzoni told The Boston Herald that the product is essentially designed for multitasking. “It’s a time-saver; your two favorite products in one jar,” he said. Pettazzoni came up with the idea for this peanut butter with a few friends as they were trying to dream up the perfect hangover cure. The peanut butter's caffeine comes from a green tea mix-in that has been added to the spread to give it that added kick. It's also a great product for those who like to eat natural foods, as the peanut butter contains just four ingredients.

Although the company is new, they've had positive results in their first year of sales. Steem will be giving the public its first taste of this new peanut butter as a part of the Boston Veg Food Fest on Oct. 24 and 25. “It’s exciting because you have this thing that no one else has created before,” Pettazzoni said. “But when you first go out there people don't know what to make of it until they try it. Then they realize it doesn't taste strange, and then we have a fan for life.”

Believe it or not, though, peanut butter is certainly not the only food to have been caffeinated. If you're curious as to what else you can eat to get an energy boost, here's a list of seven other surprising foods that come with caffeine.

Let's start with a classic. Coffee ice cream from Haagen-Dazs made with Brazilian coffee nuts. One serving contains 48 mg of caffeine, which is equal to about half of one cup of coffee.

If you want to go more of the savory route, try this caffeinated beef jerky option from Perky Jerky. The caffeine in the jerky comes from Guarana berries, which have twice the caffeine content of most coffee beans. This is certainly an unexpected way to get your caffeine fix!

Now you can drink water and experience the effects of hydration along with getting caffeinated, since coffee is a dehydrator. Blink Energy Water comes with 150 mg of caffeine in every bottle, which is equivalent to about one and a half cups of coffee.

Many types of protein bars now come with the added benefit of a caffeine boost, like these from Honey Stinger. These bars come with a relatively conservative 30 mg of caffeine.

If you want to achieve fresh breath and be rewarded with caffeine at the same time, check out these caffeinated peppermints from Original Penguin. If you're very sensitive to the effects of caffeine, these mints may be perfect for you, since they only come with seven mg of caffeine per mint.

Sunflower seeds with added caffeine? It may sound unbelievable, but these actually do exist. Energy Sumseeds come with 140 mg of caffeine per bag, giving you a refreshing energy boost along with a satisfying midday snack.

Of course, chocolate already is a natural source of caffeine, but there are many chocolate brands out there that add even more caffeine to chocolate, making it even more powerful than coffee. Awake caffeinated chocolate contains 250 mg of caffeine per bar, making it about as strong as three cups of coffee.