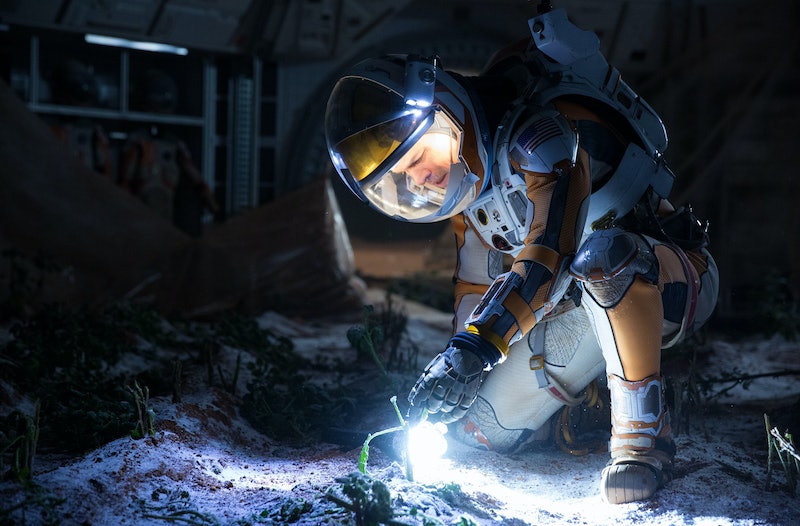 There will always be major differences between movies and the books upon which they are based. Diehard fans of original versions will always have qualms with the movie adaptations no matter how good they may be, while moviegoers who never read the books might shrug complaints off like they're no big deal. Such will likely be the case for The Martian, which, despite being a great on-screen version of Andy Weir's novel, makes a few major changes to the source material — including (spoiler!) leaving out the sandstorm scene from The Martian book that makes up a huge part of Mark Watney's journey on Mars.

For you book fans about to call blasphemy, sorry to break the news to you, but no movie will ever be exactly like the book it's based on. Books and movies are meant to be two different interpretations of the same story, one of which is a visual medium, the other of which is written. But yes, I understand that their are some parts in books that many hope to see on-screen, such as The Martian 's sandstorm scene. The scene could have made for an intense, life-threatening scenario for Watney (Matt Damon) — and the audience would have eaten it up. So why didn't it make the cut for the film?

After all, it has everything moviegoers love: high risk, tension, visual appeal and edge-of-your-seat excitement. Yet perhaps screenwriter Drew Goddard included it in the script but director Ridley Scott decided to cut it from the movie for time. After all, the film is nearly two and a half hours long, and probably doesn't need another 10 minutes of plot. Or maybe the scene never even made it into the script — the beginning of the movie already has a huge storm, which leads to Watney being separated from his crew and left behind on Mars to survive on potatoes and disco music. Adding another life-threatening storm into the movie could have made it a little too bloated.

Still, it would have been cool to see. For those who didn't read the book, here's what the sandstorm scene is all about: As shown in the film, Watney needs to get to the Ares 4's landing site, which is scheduled to arrive on Mars in a few years' time. Yet here's the key difference: in the book, while Watney works on the rover used to make the journey, the electronics short out and cause him lose the ability to communicate with Earth. This is a terrible thing, as NASA now cannot let him know that a huge, potentially fatal dust storm is headed his way. The ground team, knowing they're helpless, can only hope that Watney figures out a way to get around it, and it would've been interesting to see those moments of tension in the movie. Being the smarty pants that he is, Watney figures out on his own that a storm is coming, and manages to go around it. The crisis is averted and he goes on his merry way to Ares 4.

In the movie, though, this scene is totally gone, and Watney never encounters a major setback like this on his journey. Yet perhaps, as I theorized earlier, the scene was filmed, but ended up being cut from the final version. Perhaps we'll enjoy it in an extended version of the movie? Still, even though it would have been cool to see a scene like this in the film, The Martian already has Watney going through enough. The movie gave him a much-deserved break.

More like this
Why The '365 Days' Sex Scenes Are Good, Even If The Movies Aren’t
By Arya Roshanian
Lisa Marie Presley Reviewed Baz Luhrmann’s ‘Elvis’ Movie On Twitter
By Grace Wehniainen
Laura Dern Said “Cultural Awareness” Made Her Rethink This 'Jurassic Park' Fact
By Grace Wehniainen
The 'Hocus Pocus' Sequel Finally Has A Release Date & It Makes Total Sense
By Shannon Barbour and Radhika Menon
Get Even More From Bustle — Sign Up For The Newsletter