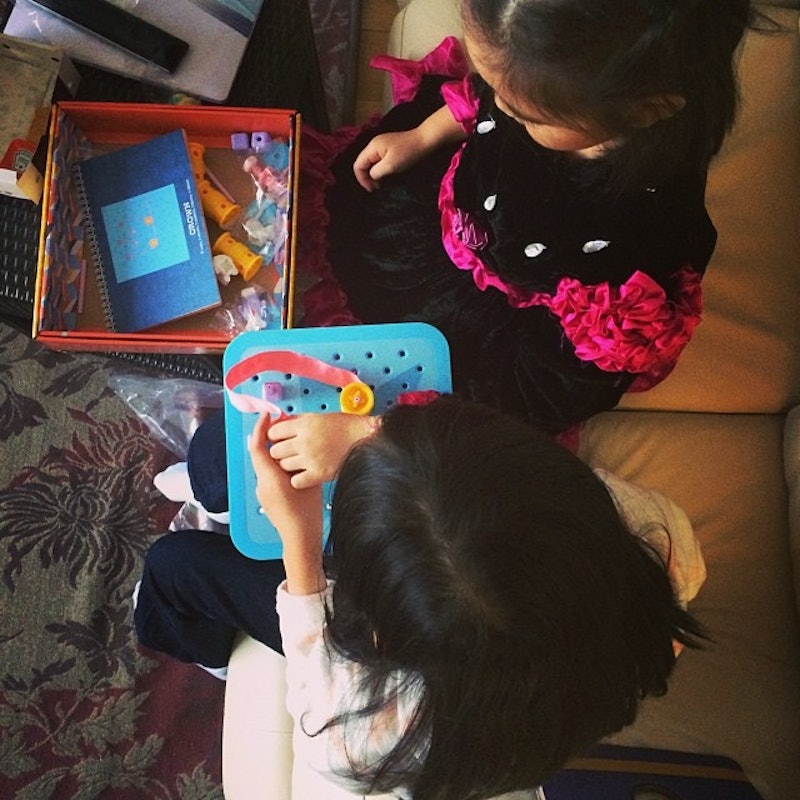 The GoldieBlox construction set for girls that was a huge hit this Christmas has actually been garnering some criticism for pastel colors and a princess theme that allegedly perpetuate stereotypes. While many have applauded the idea of a toy that bucks traditional gender stereotypes and gets girls to be interested in STEM fields, critics point out that GoldieBlox still uses old ideas of femininity as a marketing tool. Andy Hinds at The Daily Beast writes:

But there were detractors, who suggested that, upon closer inspection, the GoldieBlox line was not much different than other “pink-washed” toys whose marketing depends on assumptions that boys and girls are fundamentally different in their interests, play styles, and aptitudes, and that girls must be marketed to with the trappings of traditional femininity in order to be enticed to build things.

The company launched last February with its first product, GoldieBlox and the Spinning Machine, which combines a storybook, small construction set, and figurine. That first toy has now been followed with a second set. Although the sets all involve construction materials, they stick to a pretty pastel color palette, and one of the two sets' storyline involves princesses (but the girls in the story actually buck the princess trope).

Although the sets all involve construction materials, they stick to a pretty pastel color palette and one of the two sets' storyline involves princesses.

Goldie Blox CEO Debbie Sterling studied engineering at Stanford with a focus on product design. After she realized she wanted to make an engineering toy for girls, Sterling played with hundreds of children and interviewed experts at Harvard. Her findings showed that girls actually play differently than boys.

“Rather than just building for the sake of building, girls have a tendency to prefer playing with characters, themes, and stories," Sterling explained in an interview with Andy Hinds from The Daily Beast.

“Rather than just building for the sake of building, girls have a tendency to prefer playing with characters, themes, and stories."

“When I first started Goldie Blox,” Sterling said, “I had so much pushback from people in the toy industry. They told me that the concept was extremely ‘niche’ and could never go mainstream. I wanted to really push the envelope, but there was always that toeing of the line where I had to think about how to appeal to girls.”

So yes, Sterling chooses to use the different way girls play to get them interested in the STEM fields. But whether this difference in play is innate or created by the marketing around toys is hard to tell. In the meantime, let's just get back to applauding the progress a toy like GoldieBlox indicates.