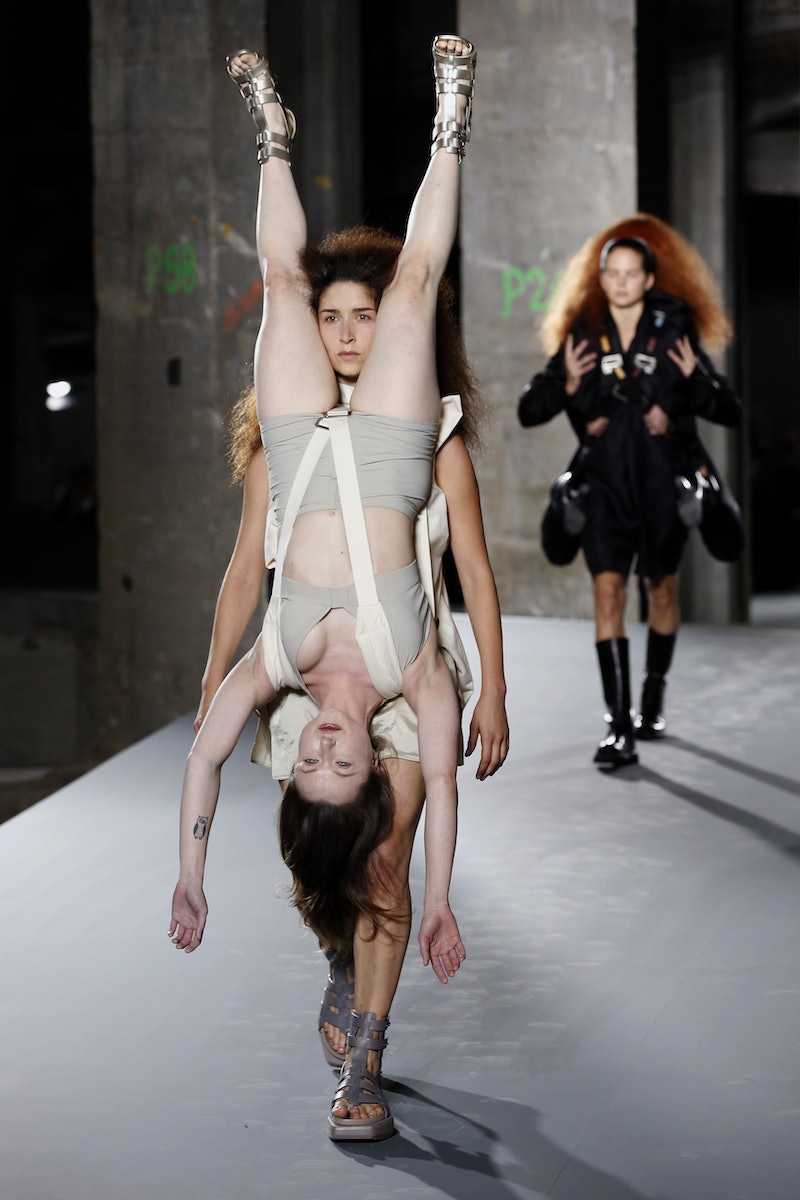 There are quite a few health hazards when it comes to modeling: twisted ankles from sky-high heels, sleep deprivation from crazy busy schedules, and dangrous nutritional pitfalls from trying to fit into a certain size. But this is a new one: Models wore models at Rick Owen's Spring 2016 Paris Fashion Week show, according to Us Magazine. They literally had to carry each other. Huh?

In a completely bizarre move, Owens' models had other models strapped to them in bizarre poses as they walked down the runway. Upside down, fetal position, circus-level piggy back rides — I repeat, huh? Honestly, show attendees probably couldn't tell you much about the collection they saw. I imagine they were probably pretty perplexed and captivated by the humans attached to each other.

This isn't the first time Rick Owens has held an, um, unique fashion show. According to the New York Times, Owens had "Stomp"-style step dancers show his creations for women in 2013, and a year later, several models in his NSFW men's show wore outfits that put their genitals on display.

Obviously, Owens isn't finished with the shock value approach to runway shows. And, hey, more power to him. I just hope this model is feeling OK now... talk about a rush of blood to the head:

That wasn't the only exhibitionist walk. This model's boots were made for... hanging?

I think both of these models need a serious back massage after their walk/ride.

And these ones. OK, Rick, maybe just back massages for all.

Rick Owens may be known for his crazy presentations, but he's not the only one who's made headlines on the catwalk. Here are three other designers who've stepped way, way outside the box:

The craziest part about Jeremy Scott's fashion shows are the clothes themselves. From Lisa Frank corsets to Bart Simpson sweatshirts, we've seen it all.

For his Fall 2012 show, Thom Browne chose an eerie motif: melancholy models walked around other models dressed in gray suits and lying in coffins, according to Refinery29. Creepy.

Karl is all about over-the-top shows: He chose the Great Wall of China for Fendi's show in October 2007, and he imported a 265 ton iceberg from Sweden for Chanel's Paris Fashion Week show in 2010, according to Oddee. Last year, his setting of choice for his F/W show was a giant grocery store, according to International Business Times.