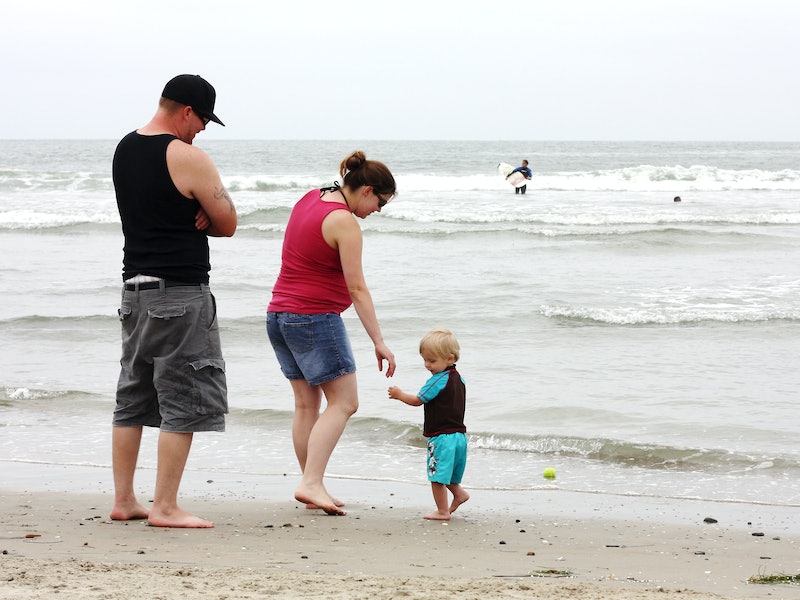 In the past, studies have consistently found that couples who have a child before getting married were much more likely to divorce than couples who married first. But now that the practice has become increasingly common, the Council on Contemporary Families thought it was as good a time as any to look at those numbers again. And yep, it turns out that nowadays, having a baby before marriage doesn't lead to divorce. Couples who walk down the aisle after their baby arrives are no better or worse off than those who tied the knot first.

While it seems that the timing of a marriage had no bearing on the likelihood of a breakup, the marriage itself did. About 30 percent of parents who lived together but never married broke up within five years, which is double the rate of parents who eventually married. The report also stresses that marriage is not a magic pill for your relationship — couples who lived together but did not marry tended to have less income and education than their married counterparts, which could explain why they didn't marry. There may have also been reasons within the relationship not covered by the survey (such as abuse or infidelity) that caused the couples problems, and marriage certainly wouldn't have solved them.

The question is: What happened in 15 years that made such a difference in the divorce rates? Kelly Musick, the study's lead researcher, told The Hufffington Post that she believes there are now fewer social pressures on us to jump straight into marriage immediately after having a child:

Living together has become a common part of the family landscape in the U.S. and many advanced industrialized countries. There is less pressure nowadays to marry and more leeway in how to organize family life. Many couples may be jointly planning marriage and childbirth as the quality and commitment of their relationships grow, with little regard to which comes first.

It's certainly true that a marriage is less likely to fail if both partners actually want to get married, rather than feel obligated because of a proverbial shotgun in the back. The main takeaway here? Don't get married if you don't want to — it's as simple as that.

More like this
Starbucks' Summer Menu Includes A New Chocolate Cream Cold Brew
By Emma Garza
9 Signs You Might Be In A One-Sided Relationship
By Lea Rose Emery and Mackenzie Sylvester
Here’s How To Reignite The Spark In A Sexless Relationship
By Vanessa Marin
Are Gemini & Gemini Compatible In A Relationship?
By Kristine Fellizar
Get Even More From Bustle — Sign Up For The Newsletter