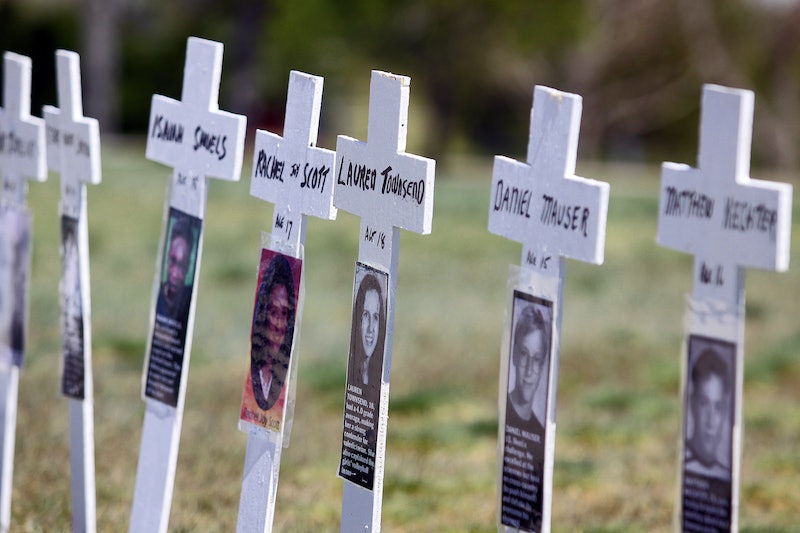 On Thursday morning, a shooter killed 13 people and injured at least 20 at Umpqua Community College in Roseburg, Ore. Douglas County Sheriff John Hanlin confirmed to reporters in the afternoon that the still-unidentified shooter was dead after engaging in a firefight with responding authorities. Specific details are still emerging about the shooter and victims, but the Umpqua shooting is already devastatingly similar to the one at Columbine — the infamous 1999 incident in Littleton, Colo. Update: Hanlin confirmed the number of fatalities at 10, including the gunman, and the injuries at seven at 5 p.m. PST. The shooter was identified by the New York Times as 26-year-old Chris Harper Mercer on Thursday night. The victims' names were released Friday night: Lucero Alcaraz, 19; Treven Taylor Anspach, 20; Rebecka Ann Carnes, 18; Quinn Glen Cooper, 18;Kim Saltmarsh Dietz, 59; Lucas Eibel, 18; Jason Dale Johnson, 33; Lawrence Levine, 67 (assistant professor); Sarena Dawn Moore, 44.

First of all, the two shootings have similar casualty numbers — at Columbine, 12 students and one teacher were killed and 24 were injured, while the death toll at Umpqua has been reported at 13 as of Thursday afternoon, with more than 20 injured — though Sheriff John Hamlin has said he can only confirm 10 fatalities and seven injuries.

The Umpqua shooter has not yet been named, but officials confirmed it was a 20-year-old white male who opened fire at Snyder Hall, a classroom located on the southeast end of the community college. As many remember, two Columbine students, Eric Harris and Dylan Klebold, brought automatic weapons to their high school, shooting their classmates and teacher in an approximately 45-minute spree. While Columbine involved two shooters and Umpqua involved only one, the perpetrators in both tragedies were killed at the scene.

Both mass shootings also have a possible religious element. Following the tragedy at Columbine, it was reported that one victim, Cassie Bernall, was killed after she answered "yes" when one of the shooters asked her if she believed in God. However, subsequent investigation into the shooting revealed that it wasn't Barnell, but another student, Valeen Schnurr, who had been asked about her faith. The Washington Post reported that Schnurr was asked if she believed in God, and after she said "yes," the shooter walked away and let her live. Despite the religious questioning though, the Columbine shooting was linked to the fact that both shooters had been bullied for years, and they committed suicide after their rampage.

It's still unclear exactly what happened at Umpqua, or what the shooter's motives were, but local outlet News-Review Today reported that Kortney Moore, an 18-year-old Umpqua student in a classroom where the shooting took place, claimed that the shooter asked people to stand up and state their religion before he started firing his weapon. It's still unknown whether the shooter committed suicide or was killed by police, but Sheriff Hanlin told The New York Times: "The threat was neutralized. Officers continued to sweep the campus looking for other threats ... The shooter is deceased."

Sixteen years apart, these two tragic school shootings are too similar. And as more information emerges about the Umpqua victims and the shooter's motive, the small Oregon town is now forever tied to Columbine.