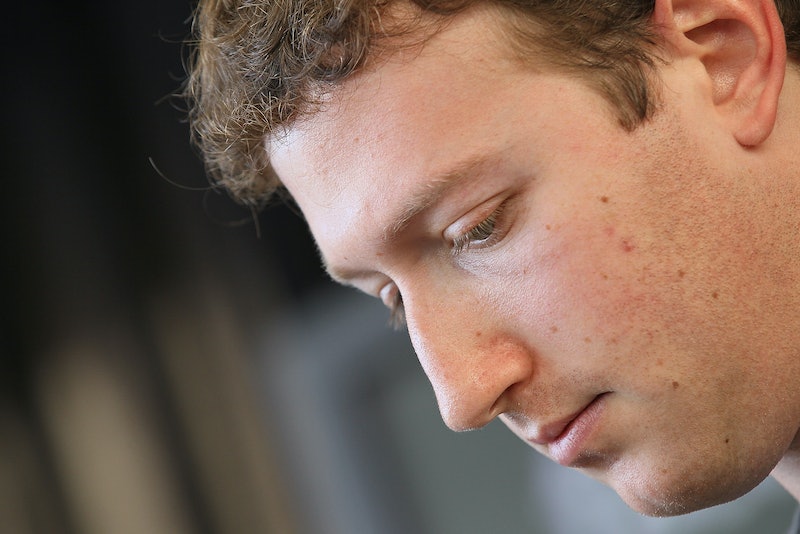 Mark Zuckerberg sure looks sad. Maybe that's because his Facebook friends are leaving him. Teens — the ones who made Facebook the global company it is today — are leaving in droves. And it's all because of their parents, according to a new European Global Media Impact Study (GMIS). The study looked at Facebook's use in nine towns over the course of 15 months and concluded that Facebook is dead. Or at least, on life-support.

"People think that social network sites such as Facebook are just the latest extension of the Internet," writes the GMIS team on their website. "We show that in most important respects, Facebook is better understood as the very opposite of the Internet. The internet fostered specialist groups, Facebook brings groups into the same space."

Zuckerberg, has, in a sense, been defeated by his own creation. The Gen-Xers and Baby Boomers came to keep an eye on their kids, but stayed when they discovered that connecting with other adults was fun: the reuniting of high school friends, organizing kid-free outings with other grownups, or even — to borrow their teen daughter's phrase — the "creeping" on old flames.

But all this is getting a little embarrassing for the teens who helped launch the social media phenomenon. Facebook brings disparate groups into the same space, and with the encroachment of moms and dads — manifested in friend requests and clumsy attempts at interaction — kids are leaving to find social refuge elsewhere, according to GMIS lead anthropologist Daniel Miller:

"Mostly they feel embarrassed to even be associated with it. Where once parents worried about their children joining Facebook, the children now say it is their family that insists they stay there to post about their lives."

Teens do not care that alternative services are less functional and sophisticated, and they also unconcerned about how information about them is being used commercially or as part of surveillance practice by the security services, the research found.

And so the Millennials are leaving Mark Zuckerberg in droves. Instead of having all their essentials in one place — photo sharing, status updates, and communication — teens are increasingly going the way of the modern investment portfolio and diversifying; placing their stock in individual platforms instead. The mostly parent-free Instagram, Snapchat, and Twitter have taken over on the smartphone. After all, just sixty-seven person of adults 35-49 own tech-savvy mobile phones, compared to 81 percent of those 18-34.

"Facebook is not just on the slide — it is basically dead and buried," Miller said.

What's a Zuckerberg to do?