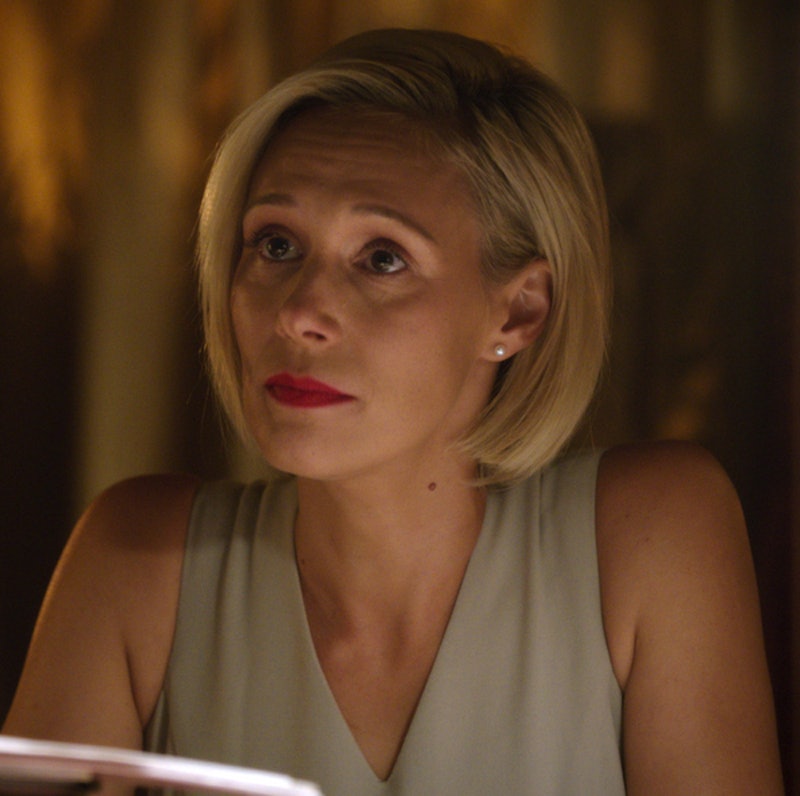 So, remember on the insane How to Get Away with Murder premiere when Bonnie killed Rebecca? Yeah, that was weird. I know Bonnie would do anything for Annalise, but I also thought Bonnie was a stable person, and after that interaction between her and Rebecca in the cellar... I'm not so sure anymore. Bonnie's darker side came out in that scene and left a lot of us feeling like we just got smacked across the face with a bronze statue. Besides the premiere revealing that Bonnie is a stone-cold killer, it also hinted that something happened to Bonnie in the past. Of course, the reveal of that deep, dark secret likely won't come for some time — Shonda Rhimes loves to keep us on the edge of our seats — but we can still take a stab at guessing. (Pun intended?)

The interaction between Bonnie and Rebecca left me stumped when Bonnie hinted at something happening to her in the past. "Bad things happened to me," she said, "The worst." She continued to tell Rebecca that she didn't take those past occurences and let them shape her future, since she's a "good person" and all. (News flash, Bon-Bon, you're about to kill someone with a plastic bag so...)

The difference is, I don't use them as an excuse. I grew up, stopped playing the victim. And I definitely don't keep the cycle going. Hurt people, because they hurt me. Kill a girl.

When Rebecca contested to having killed Lila, Bonnie told her that she didn't believe her and that Rebecca "needs to go."

So, what was it that Bonnie experienced in the past? I'd say the best guess is some type of terrible relationship. It's heavy, but so is this entire show. Bonnie had a very weird, intense attraction to Sam Keating, Annalise's now-dead husband. Annalise believes that everything Bonnie did was for Sam. Whether that be true or not, who knows, but it's hard to deny the fact that Bonnie didn't have such great taste in men. Remember how things went down for her in Season 1?

I'm not throwing shade, but she also immediately ran to Asher after getting fired from her job. Even though she knew that she and Asher weren't going to be a real thing, she still started a mini-affair with him, showing that maybe she doesn't have the best judgement in love.

If Bonnie was in a bad relationship in the past, there are a lot of things that could have "happened" to her. She could have been physically abused, emotionally abused, sexually assaulted, etc. She alludes to the fact that she doesn't keep a cycle going, which is at least semi-comforting to hear.

We'll most likely hear more about Bonnie's past as the season unfolds, but as for now... Don't hang out in weird law office cellars with Paris from Gilmore Girls.

More like this
What Happened To The Real Sean Suiter From We Own This City?
By Kadin Burnett
The True Story Of Candy Montgomery From Hulu’s True Crime Series
By Radhika Menon
The Time Traveler’s Wife Book Has A Heartbreaking Ending
By K.W. Colyard
‘SNL’ Referenced Jesse Williams’ Broadway Leak In A Chaotic Theater Sketch
By Grace Wehniainen
Get Even More From Bustle — Sign Up For The Newsletter