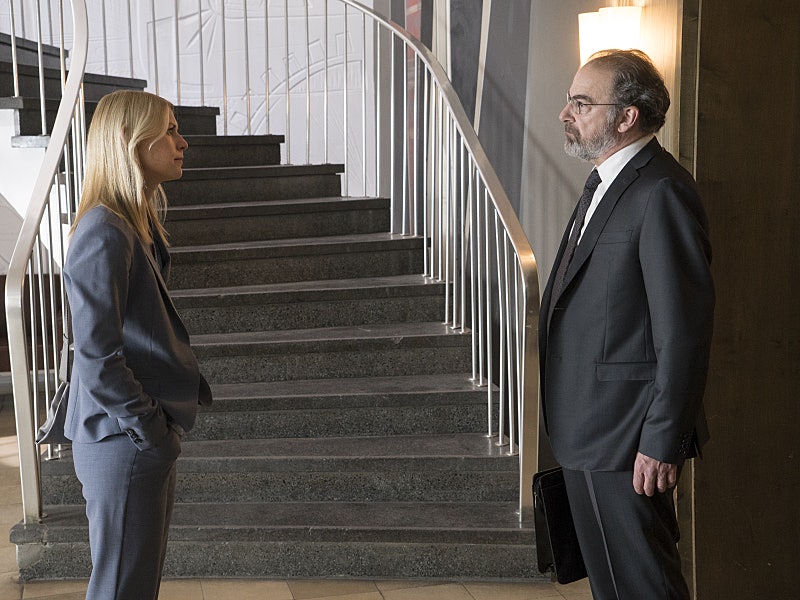 Things were tense between our favorite mentor/mentee duo when Homeland returned Sunday night. The Homeland Season 5 premiere brought viewers two years into the future for all of our favorite characters. Carrie is now living in Berlin with her new boyfriend, Jonas, her daughter (with Brody) Frannie, and a new job working private security for the Düring Foundation with supposed philanthropist boss Otto Düring. Saul, on the other hand, is back at the CIA running things as the European Division Chief, though not as the director which was his supposed direction as suggested by the Season 4 finale. However, when the two run into each other at the Berlin office in the premiere, their reunion is extremely cold. So what happened between Saul and Carrie during the time-jump? Clearly things have gotten worse in those two years.

The Saul and Carrie confrontation was one of the best scenes of the night, aside from Carrie's temporary abduction to meet with members of the Hezbollah. But the pure iciness of it was really quite upsetting, considering how close Carrie and Saul had become over the years.

The meeting arises when, despite not being in the CIA any longer, Carrie has kept her clearance level over the years and visits her old friend Allison Carr who is now the Berlin Station Chief. Carrie is there asking Carr for support as she and Otto make their way to Lebanon to visit a refugee camp in the midst of violence and unrest. Carr refuses, as she wants information about Otto from Carrie, putting Carrie between a rock and a hard place, since a writer at the Düring Foundation wants information about the CIA from her as well. As she leaves, she meets with Saul, and their exchange is charged with anger.

We discover that somehow, Carrie botched Saul's bid for director, though she doesn't see it that way, and now Saul believes that Carrie has turned to the dark side and is working for the enemy. According to Saul, the Düring family made a fortune in World War II with their steel mills where they "worked prisoners to death." He understands if Otto has some "karmic dues to pay," but doesn't get why Carrie feels the need to "atone" as she did not commit any sins by trying to keep America safe. When Carrie says she's not atoning but just trying to do good work, Saul really lets her have it. "Well you're not. You're being naive and stupid, something you never were before."

Ouch. It hurts quite a bit to hear Saul say that to Carrie, but it makes me wonder, why exactly does Saul feel this way? My theory is that when Saul was attempting to become CIA director, officials in charge of the appointment interviewed Carrie about whether or not Saul was right for the job. Even if Carrie didn't intend to ruin Saul's chances, her interview didn't help him win over the officials and he was passed over. Saul is likely also personally offended that someone he mentored and tried so hard to keep safe turned out to be so ungrateful in his eyes by running away from her life and responsibilities. But to be fair to Carrie, Saul betrayed her first and gave her all the reason she needed to get away from the CIA, an organization that could even corrupt someone like Saul, whom she trusted so much.

Though I'm not sure that these are wounds can heal very quickly, I just hope they won't get too much worse. But this is Homeland, so things will undoubtedly get worse before they get any better.