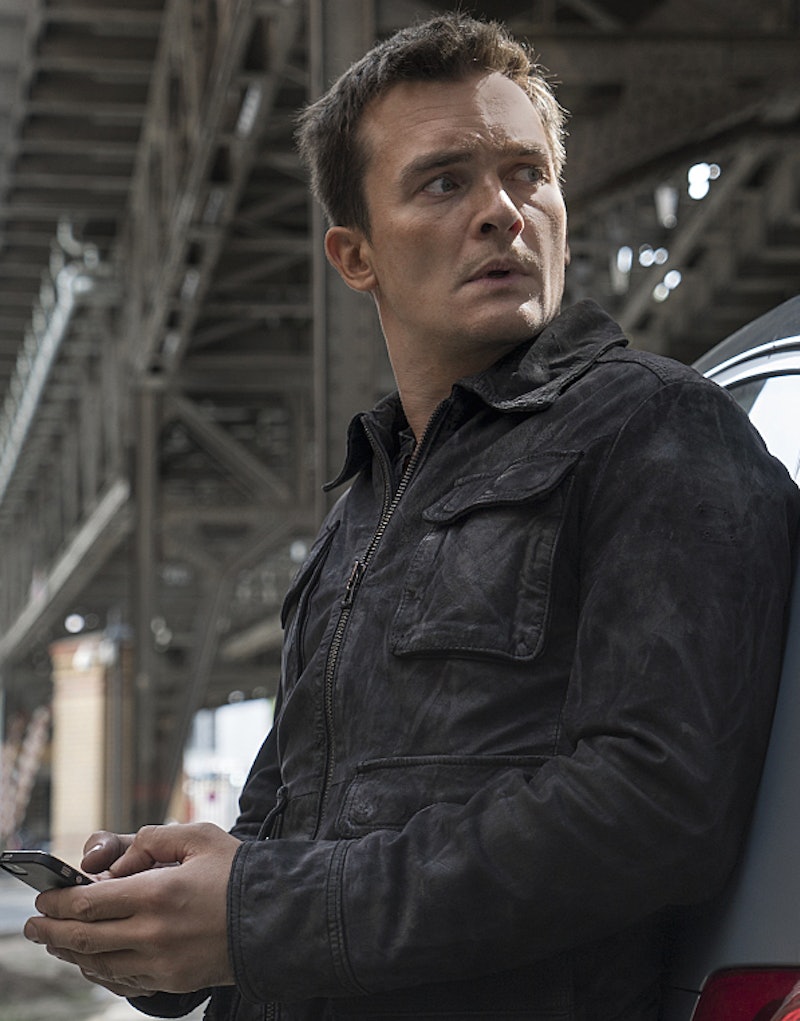 I'm not sure there is anyone more scarred on television at the moment than Peter Quinn in the Homeland Season 5 premiere. The Showtime series returned Sunday night after a two-year jump, and life was not kind to Quinn in that time. For those of you who may not remember, we last saw Quinn taking a new mission in Syria after believing that Carrie was going to reject his proposal to get out of the CIA together for good. Carrie was unfortunately too late getting back in touch with him and they most likely have not seen each other since. During the season premiere, Quinn returned to CIA headquarters in Langley and gave officials a rundown of the program he had been working on and was asked whether or not it was working. Judging by Quinn's image alone, it's obvious something dark has happened to him.

When asked about his time in Syria, Quinn says that he believes the program should stay in place, despite things in the country seemingly not getting any better. As the officials continued to push him, Quinn finally cracked and asked them what they thought the strategy in Syria was. He was clearly fed up with everyone trying to fix complex issues despite a lack of resources and forethought.

"See, right there is the problem, because they have a strategy," Quinn replied after silence from the officials in charge. "They're gathering right now by the tens of thousands. Hidden in the general population, cleaning their weapons, and they know exactly why they're there... Do you really think that a few special forces teams are really gonna put a dent in that?"

When he offers his suggestions on what to do in the area (he mentions sending 200,000 troops indefinitely), the officials tell him it's never going to happen and he seethes back at them, "Well then I better get back there." After the interrogation is over, Quinn and Saul meet together for a new mission. Saul is now in Germany trying to deal with the leak of classified government documents that if exposed, could lead to a whole mess of trouble. The Germans decide to cancel their agreement to have the CIA spy on people for them to get around a German rule, but Saul decides to continue the mission with Quinn alone.

As Saul gives Quinn new names of people to assassinate, Quinn just replies that whatever name Saul puts in the envelope, he'll take care of it. Clearly something has happened to Quinn. He's always been a sort of darker character, but my guess is that when Carrie supposedly rejected him (even though he doesn't know that she didn't), Quinn was sent further off the deep end than ever before. He took the job in Syria even though he wanted out of the CIA, because he doesn't know how to live a life away from the agency. That's why he needed Carrie and he probably thinks she let him down.

Someone needs to help pull Quinn from the darkness, because right now he's headed down an even darker path, and he doesn't deserve that.

More like this
Everything To Remember About Lace Morris Before 'Bachelor In Paradise' Season 8
By Grace Wehniainen
Here's What Jeffrey Dahmer's Dad Has Said About His Other Son, David
By Grace Wehniainen
Where Is Lionel Dahmer Today? Jeffrey Dahmer’s Father Reflected On The Serial Killer’s Death In 2020
By Brad Witter
Watch The Thrilling Teaser Trailer Of 'Shadow And Bone' Season 2
By Gretchen Smail and Jack Irvin
Get Even More From Bustle — Sign Up For The Newsletter