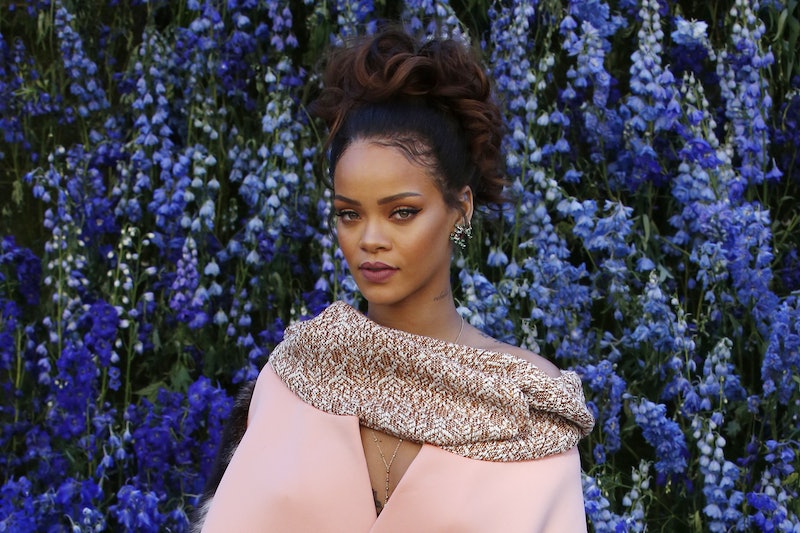 It's hard to believe that it has been 10 years since Rihanna first broke into the entertainment industry, but 2005 was the year when the Barbados-born singer graced her future fans and followers with her first studio album Island of the Sun . Obviously, a lot has changed since her first hit single "Pon de Replay," but one thing has stayed the same: the consistent proof that Rihanna is here to stay in the music industry.

From her dance club hits to her vulnerable soulful ballads, it is clear that Rihanna has stories to tell with her lyrics. And it seems like people are more than happy to listen to them. But if the music were not enough, they get to hear updates from badgalriri, as she's known on her controversial NSFW Instagram page. She is now not just a singer but a personality — and a powerful one at that.

Listening to her words, it is nearly impossible to not see how she has held so many viewers captive with attention and investment for so long. Read on to see some of the best quotes from the Bad Gal herself that prove that she is a powerful force to be reckoned with in the business and that she is not going away anytime soon. Let her inspire you with her fearlessness and her tenacity-filled ways.

"Definitely a very big deal for me. You know, I can't believe it's 10 years already, but we definitely have to celebrate this year," she said in an interview with the Associated Press in August 2013. "There are a few things I have in mind, so you'll have wait on that, but don't think I'm forgetting because this means a lot to me that I made it to 10 years."

"New album is going really, really great. We have recorded a lot of songs and I can't wait to finish and put it out. That's my next step," she dished to the same Associated Press interviewer.

3. On Her Thick Skin

"This skin has been developing since my first day at school. It didn't happen after fame; I couldn't survive fame if I didn't already have it. So sometimes the toughest thing in life is to be vulnerable. I'm not generally a sensitive person, but I tend to be more sensitive toward others and what they're going through. I don't know if that's the healthiest thing, but it's the truth," she spilled in a Harper's Bazaar interview.

"I think I'm like most people — we fear the unknown and the things that have yet to come to pass, which are the very things that don't deserve to be feared. When you give God complete control, it's very hard not to be fearless," she said in the same Harper's interview.

5. On Learning From Mistakes

"It’s all about honesty. This is not failure, it’s lessons. It’s not the end. If you learn from mistakes it’s not failure. If you go and do the exact same f*cking thing then that’s the stupidest thing ever and it probably won’t work the second time," she said in an interview with Elle UK.

6. On Her Upcoming Album

"It’s not done! To me it’s never done until it’s done. Until the final moment," she told NME in a September 2015 interview. She added, "I have so many songs I love — and they’re so different — that it's hard to actually put them all on the same album."

7. On Her New Approach To Music

"It’s easy to make an album full of great songs," she said in that same NME interview. "But I want people to go for the ride. The songs have to make sense together."

8. On Not Stopping Making Music

"From the beginning, when we started making music, it was kind of always back to back — even with the second album that came, I would say, eight months after the first album was released, and then the third album came a year after that. So I've just never stopped making music. I love making music. That's what I love to do. So I don't feel like there's any need to take a break unless I want to," she said in conversation with Kanye West in Interview magazine.

9. On The Music Coming Naturally

"If I'm feeling like dancing or clubbing, then it will be reflected in the music. If I'm feeling dark and vulnerable, then it will reflect in the music, too. So that's how we start. I guess it's a more organic process. We don't really want to sound out and just say, 'Oh, this is what we're doing this time." It just comes naturally,' she said in the same Interview piece.

Now, all her fans and followers have to do is wait for her next album to come out. There's sure to be more words and wisdom from Rihanna after that.