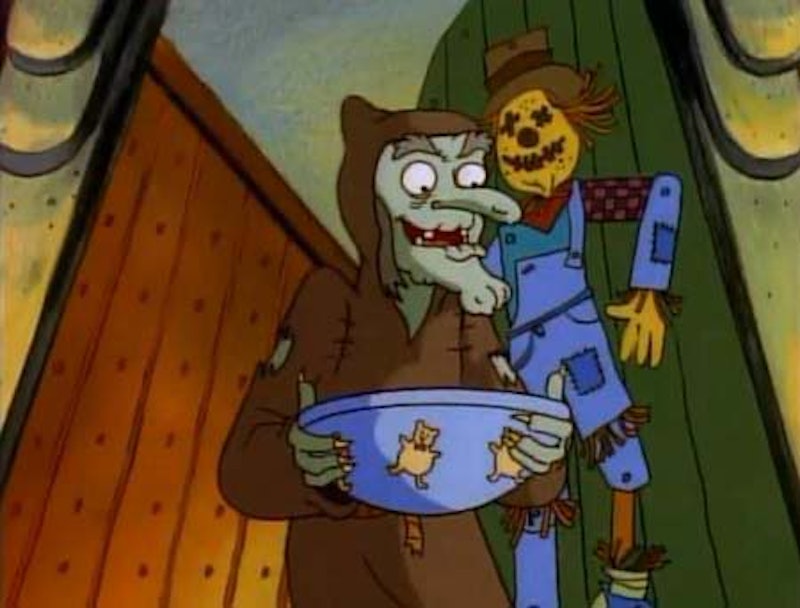 Nick or Treat! No, seriously: as you may already know, Nickelodeon putting out '90s revival channel The Splat, and part of that revival involves bringing back Nick or Treat for the week of October 26 onward. That means contestants will be able to call in and choose different houses on screen, and maybe, just maybe, win some prizes. But, even if that brand of nostalgia is too much for you, you’re probably ready to curl up with some of your favorite Nicktoon Halloween specials. So I wrangled them up for you, obviously!

Now, granted, towards the end there may or may not be cartoons that technically debuted in the early aughts of the millennium, and they will be appropriately noted. While I hate lumping '90s and early 2000s together, I was born in 1991, so my collective consciousness encompasses both. Besides, how great was The Fairly Odd Parents Halloween specials, seriously?

Other than that, we're tapping into some pretty vintage episodes here, and I’m sure you’ll be able to catch some of them during the Nick Or Treat block. So brace yourself, fellow millennials and/or ‘90s kids (that’s most of us, right?). We’re gonna revisit some of the coolest Nicktoon Halloween episodes ever.

The Pickles family is running a haunted house, and Angelica is being all braggy about how she can eat candy, and the babies (with their combined five teeth) can't. Spoiler: by the end of the night, those crazy kids get involved in both house-haunting and candy-eating. I'm still skeptical about the Reptar Bars prominently featured in this episode, though. Are they made of real Reptar? Is that why they turn your tongue green?

Doug, dressed as some kind of Indiana Jones knock-off, goes with Skeeter and Roger on some kind of Disney's Haunted Mansion rip-off ride (Blood Stone Manor, for real). They basically bite off more than they can chew and end up getting trapped in this Funkytown Fear Factory. I'm not going to spoil the ending in case you're a little hazy on it, but, essentially, it becomes a matter of who gets the last laugh... or scream, rather. Side bar, how cute is Skeeter's Halloween costume? He's a rocket ship. Classic Skeeter.

Of course the series (which is always Halloween appropriate) kicked things off with a Halloween episode. This is a good one, too. Basically, the gang goes out on Halloween (despite The Gromble banning them from leaving). They have a hard time legitimately scaring anyone, because, well, everyone looks scary, but they run into trouble when Ickis accidentally switches places with a human boy named Nicky. Oooooh dear...

Arnold and Gerald pull a War of the Worlds and prank everyone by saying there's been an alien attack. Like War of the Worlds, things get blown horribly out of proportion, especially considering all of their classmates dressed like aliens this year. Whoops.

The awkward moment when your (literal) other half may or may not be a Dogpire.

Technically a Rugrats episode with Aaahh!!! Real Monsters cameos, but, as the first Nicktoons crossover, it's a historic piece in its own right. Worth watching for the line, "Chocolate pudding or babies?" It is a very hard decision, guys.

Hilarious commentary on dressing up as dead people, whether it's intentional or not, and double hilarious commentary on lame costumes (the ghost of The Flying Dutchman is more offended by Spongebob's costume execution than the actual costume itself). In the end, Spongebob proves to be the scariest of them all. Bless.

The whole "everyone's costumes become real" concept was done better on Buffy the Vampire Slayer, I won't lie. But this is a delight, and there's no other Halloween song as great as "Real And Scary." There are also very few Halloween carols to begin with. Regardless.

This is circa 2001, but it warrants mention. First of all, if you're searching for an actual scary Halloween episode, this is as good as it gets. Dib's nightmare world pumps out enough nightmare fuel for all of us. If this isn't enough, try checking out any other Invader Zim episode, like, say, "Dark Harvest."

Hopefully you're now deeply in the Halloween spirit (haaaaaa). Always good to know that when it comes to Nick or Treat, you really don't have to make the choice.