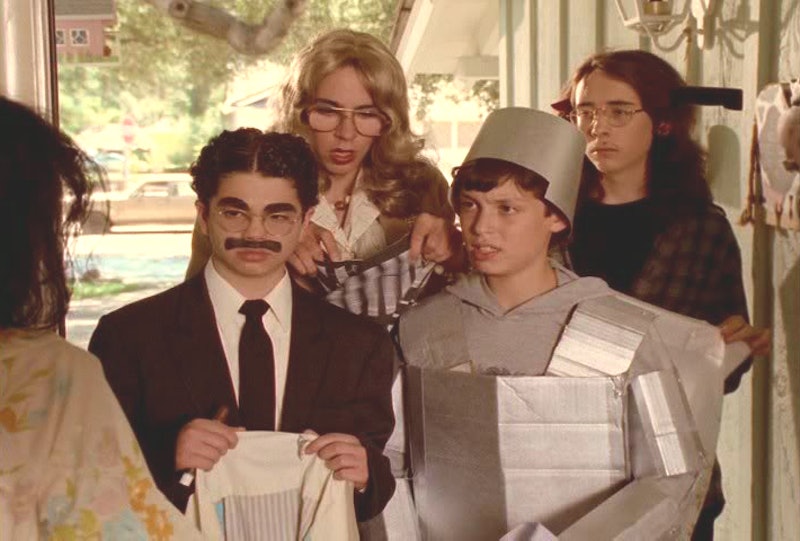 Halloween is a magical time of year. The smell of crisp autumn leaves fills the air, pumpkin spice is injected into every single confectionary you could possibly dream, and the moon starts to shine on things that go bump in the night. Halloween means costumes, parties stocked with harvest ales, horror movie marathons, trick or treaters, and haunted houses. Seriously y'all, what's not to love? If you needed another reason to celebrate all things October 31st, Halloween also inspires some of the funniest and spookiest television you'll see all year. In fact, I would argue that some series' very best episodes are based on the scary holiday.

So how do I even go about picking the very best Halloween episodes? Well, there are plenty of factors that go into the decision: creativity of costumes, inventiveness of plot, actual scare factors, so on and so forth. However, what it really comes down to is the very special-ness of the Halloween Special. Some shows shine at Thanksgiving (I'm talking about you, Friends) while others go all out for Christmas (hey there, Saturday Night Live), but my personal favorites are the series who take the show to another level on Halloween. Here are the very best of the best of Halloween Spooktaculars.

Surprisingly, Angel only had one Halloween episode in its entire run. However, it did Halloween right. "Life of the Party" was one of the show's sexiest episodes in which an office Halloween party turns into a non-stop boink fest for David Boreanaz. Sure you could fight demons, or you could keep looking at Angel's abs. Up to you!

#19 Friends, "The One With the Halloween Party"

Though Friends is famous for its ode to Thanksgiving, the series paid some hilarious attention to its autumnal holiday cousin, Halloween. What really makes the episode stand out is Ross' Spud-nik costume. Any time Ross is the best part is worthy of special recognition.

It's the perfect combination of the series' signature dry humor coupled with actual terrifying demons. Though Supernatural tackles your worst fears on a regular basis, it took special care in delivering the frights for Halloween. In this episode Sam and Dean have to race against time in order to stop the local witches from bringing an ancient demon back to life. There's no day better than All Hallow's Eve, amiright?

"Halloween" highlights the absolute joy of the holiday. Phil and Claire Dunphy revel in Halloween more than their kids and take every opportunity to pull pranks and turn their home into the biggest and best haunted house on the block. The episode also highlights a lot of the irresistable charm Modern Family had in its earlier seasons.

The far-too-short lived series had one of the strongest ensembles on television who were not only endearing in their own right, but were always strengthened when they all appeared together. Their knack for delivering comedy at break-neck speed was made even more impressive with the endless sight gags provided by the very nature of Halloween. "Spooky Endings" brought the gang into a huge warehouse party where many characters' sexualities were questioned in a way that only Happy Endings could make hilarious.

For a series that is genuinely terrifying week after week, its Halloween episodes took the cake for televised horror.

While Liz and Jack travel to the heartland of America to find comedy's next big thing, the writers desperately try to get into big gay Halloween parties. The real horrror we find is in the "extra chuckle."

Pretty Little Liars takes Halloween very VERY seriously. Each season, fans tuned in for the lavish costumes and out-there horror plots. In "The First Secret," a story about murderous twins, a haunted house, a raging party, love triangles and [plenty of drama ensue in the most over-the-top Pretty Little Liars Halloween episode of them all.

In this episode, Jess puts it all on the line with her doctor man-friend Sam. Tired of the "just having fun," nature of their relationship, Jess musters up the courage to tell him how she really feels. After he rejects her, she finds comfort in her friends, most notably Nick, and we see their future romance start to blossom. What's most refreshing about the episode is seeing Jess be open and honest about what she wants out of her relationship with Sam. It's one of the most relatable sentiments in the entire series. Nick's fear of clowns and Schmidt's Magic Mike costume are major bonuses.

Year after year, local teenage punk Greg Pikitis terrorizes the Parks and Rec department on Halloween. From a heated investigation to Leslie and Andy getting drunk and TP-ing the kid's house, the episode hightlights how Parks and Recreation always ups the ante. Special props to amazing costumes like Tom's T-Pain.

#10 Curb Your Enthusiasm, "Trick or Treat"

Halloween was always Roseanne's favorite holiday on the series, but in "Halloween IV," Roseanne is drained of her spirit. Naturally she's visited by the ghosts of Halloweens past and the ghost of Halloweens future. After a whirlwind of visions, Roseanne gets her love for her favorite time of year back. It's touching and hilarious, like all the best episodes of the show.

#7 It's Always Sunny in Philadelphia, "Who Got Dee Pregnant?"

In a really loud and rude "Whodunnit?" style, the gang re-visits Halloween night from vary perspectives to crack the case of who might be the father of Sweet Dee's baby. It's the worst (read: best) characters on television in ridiculous costumes and plenty of booze... It's Always Sunny at its finest.

#6 Buffy the Vampire Slayer, "Fear Itself"

When the characters of Buffy are faced with their worst fears, Halloween isn't like any other night killing vampires and dashing away demons in Sunnydale. Things take an even darker turn in the series' best nod to the most ghoulish of days.

This episode would turn any non-fan into a believer. The show played out like a zombie B-movie and lived up to every cliche of the genre with perfect execution. "Epidemiology" highlights why the show stood out amongst sitcoms and was really something special on network television.

Louie is perhaps the funniest show on television. It also has moments where the comedy careens into the very serious and real dilemmas of life as a parent and life in New York. In "Halloween/Ellie," Louie takes his kids out trick or treating and run into some tough characters on the street. Here we see Louie struggle to protect his daughters and also teach them about the very real dangers of the city. It's one of those moments in the show where laughter turns into actual fear, then back again to laughter.

Though Three-Hole Punch Jim could have easily stolen the show, it was Michael Scott's desire to be loved that really took the spotlight. The episode was filled with great costumes, classic Angela-party-planning-isms, and more Pam and Jom will-they-won'tthey-ness than the norm. However, the episode landed on Michael Scott's sentimentality and his wants to be loved, have a family, and lots and lots of friends. It makes you laugh, but it also breaks your heart.

#2 Freaks and Geeks, "Tricks and Treats"

The absolute agony of geekdom never shone so brightly as it did in "Tricks and Treats." Sam fears he's too old for trick or treating and is mercilessly bullied when he does. Meanwhile, Lindsay gets into huge trouble for going on a Halloween destruction rampage with her new stoner friends. Worst of all, her brother Sam is a target of one of their pranks. Oh the agony. THE AGONY of this episode.

#1 The Simpsons, "Treehouse of Horror V, The Shinning"

No TV and no beer make Homer something, something... it's nearly impossible to pick the best "Treehouse of Horror," but this pitch-perfect parody of The Shining has everything that makes a Simpsons Halloween so special. Not to mention there are moments that as a kid, genuinely scared the ba-Jeebus out of me. Greatest. Halloween. Episode. Ever.