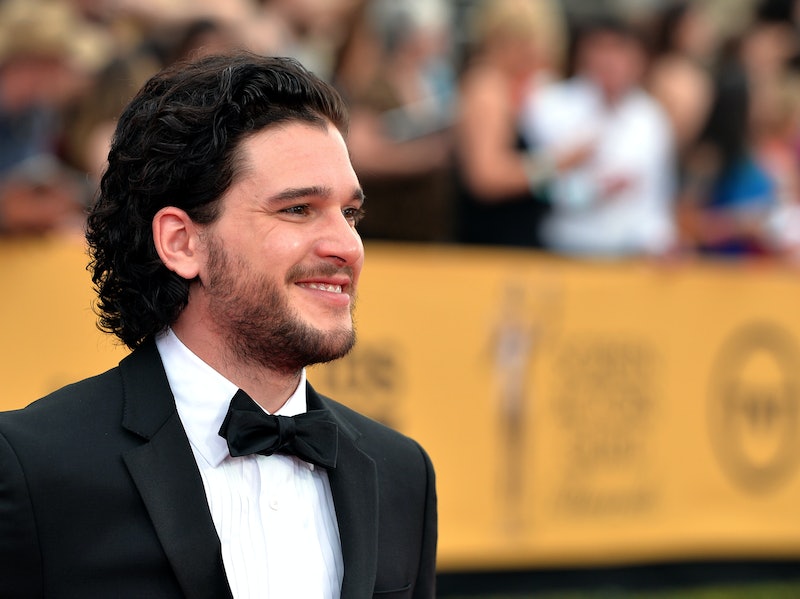 Jon Snow is alive. How do I know? For one, because if Kit Harington's character on Game Of Thrones is dead, my entire life will be shattered, and two, because there is photographic evidence. Photos never lie, am I right? Regardless of the logical fallacies I use to make myself feel better about the fate of Lord Commander Jon Snow living on in the Westeros world, lots and lots of photos have surfaced of Harington near or around the Game of Thrones set, and they are tough to argue with. The newest photo came earlier this week, of a very Kit-like actor with a manbun on the set of the HBO show in Belfast.

And it's not the first proof. Despite protestations that, no, no, Jon Snow hath passed on, this photos seem pretty hard to deny; although I guess they could be of Kit Harington's body double and man-bun double. But add that to the fact that the 28-year-old recently cracked under pressure and admitted that he was contracted for the show until he is at least in his 30s and there's a good case here. The man is not subtle.

Plus, there's #HairWatch. Many believe that the fact that the actor maintains his long luscious locks rather than getting a post-Game of Thrones haircut proves that he is still filming Season 6 as Jon Snow. He could just be rockin' the man-bun for personal reasons, but I have faith that our Lord Commander lives on. He can deny it all he wants but you ain't foolin' me, Kitty.

Here are nine photos of Harington that prove Jon Snow is alive.

This photo of Harington arriving at the Belfast airport on July 21 was one of the first that set off suspicions that he was a dirty rotten liar about Jon Snow's death.

2. He Had Breakfast In Belfast

At a deli with cast mate Nathalie Emmanuel. And although deli sandwiches are magically delicious, I don't think he flew all the way to Ireland just to have a sammie with a friend.

3. And Took A Leisurely Stroll Through Belfast

4. And Went Grocery Shopping In Belfast

Do you think he uses drugstore shampoo?

5. And Partied In Belfast

Jeez, Kit. If you love Belfast so much, why don't you marry it? JK, I know you're there because you're filming because Jon Snow isn't dead because he will never die.

6. He's Getting Lazy About Being Spotted

Do you think Kit Harington's mother would stand for that mop of hair if not for his job? I don't think so.

8. Really Though, The Hair Is Proof Enough...

9. You Can't Argue With This

If I were a betting woman, I'd call it a safe bet to say that's definitely Kit Freakin' Harington dressed as Jon Snow. Could he be filming a flashback scene? OK, sure. But could he also be filming a resurrection scene? You bet he could. Anything is possible in Westeros, except the fact that Jon Snow is dead to never return, because Harington is obviously busy filming Game of Thrones and not just hanging out with cast members on the set. You can't fool me, Harington. That man-bun gives it all away. I'll be here on #HairWatch until Season 6 premieres, or until you admit that you're back filming — whichever comes first.

More like this
Gwendoline Christie’s Partner Is Part Of Royal Family History
By Parry Ernsberger and Sophie McEvoy
Every Horror Movie Reference In The 'PLL: Original Sin' Premiere
By Alyssa Lapid
Netflix Just Rebooted A Classic ‘90s High School Drama
By Maxine Harrison
You Can Now FaceTime With 'Bridgerton's Regé-Jean Page
By El Hunt
Get Even More From Bustle — Sign Up For The Newsletter